As of this however, being a reversing entry will enter as of the first day of the next time period. But let’s just first think about why we needed a reversing entry what we’re trying to do by first looking at the end of the adjusting entry period, which is February 29. Okay, so I’m going to scroll back up, I’m thinking about the 125. That’s where I’d like to be. We’re going to scroll back down and you’ll recall that we have made adjustments related to the notes payable. So if I go back down here, here’s the notes payable, the current portion now at that 63 109, they were both in before that point before the adjusting entries down here, in just one note for that was under the subcategory of the long term liabilities. 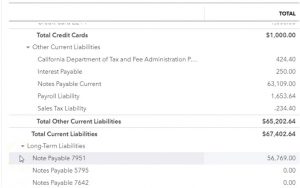 Now, if you think about the adjusting department being separate from the accounting department, if I was to give this back to the accounting department from the adjusting department, they would be they wouldn’t be happy about it, right? Because now I’d have this amount of here, and the notes payable and the and there’s and and they’re going to be over there saying, hey, look, I’m just trying to make the payments according to this amortization table. And the next payment I have to make is going to be this one and I just simply want to tie out to that 68 811 after I make the payment now, how am I going to do that? When you know like part of that isn’t the current portion, and part of it, it’s a long term portion.

I had it nice and snug down here. With its own number and everything, and I could tie out exactly to what it is breakout, the current portion of long term port, I mean, I could break out, you know, the interest and the principal, and then have my loan balance down here. And that’s true, we don’t want to mess that up. Because it really kind of makes it more difficult for us to be breaking up the short term and long term portion. After each payment, it would be easier if we can then bring this down into just one account, have them all into one sub account of some kind, listed the account numbers and then track them in accordance with their amortization table.

Therefore, we’re not just going to leave the adjusting entries that are messing up the logistics, we’re going to basically reverse them. But we’ll do the will do so as of the first day of the next period, which in this case is going to be March 1. So we’re going to go to march 1. And we’re going to say hey, look, we made it we messed you up. We made it all funny looking as of the end of February because we needed to for the financial statements. But as of March 1, we’ve reversed it And therefore your loan balances should be back where you remember them to be. And everything should be good at that point in time. So what we’re going to do then is simply reverse the entries that we put that we put in place for this short term portion of the loan. And now I’m getting lost scrolling these two items.

We’re looking for the liabilities in order assets, liabilities, and so on, you know the routine. And we’re looking for the current liability, which is going to be the notes payable. There it is, then we’re going to go into the register, we’re going to go into the register. So here we are in the register. And I’m essentially just going to reverse these two items. We could do it with one journal entry, but I’m going to do one at a time. So we basically reverse exactly what we did with those prior to journal entries.

So I’m going to make a new journal entry. And I’m going to make this as of Oh 30120 the first day of the next time period after the cutoff date, which was February 29. And then I’m going to put in the Mo This is a reversing, reversing entry. And this is going to be a decrease, I’m going to say of the 50,000. So let’s bring that 50,000 down. And then I just need to put it back into the other account that was affected. So if I select the drop down, it was like notes payable, long term, what’s the target type in an end notes payable, long term, and it’s just a matter of which one of these was it.

That’s the one we want. Okay, it’s a little record that I’m going to say Save, and then go back to our balance sheet. So now we should have them lined up, it should look like that like it was before. I’m gonna scroll back up to 125. If we go back to our balance sheet now remember the dates now are as of the ending date, which is March 1, because the balance sheet as of the point in time, the first date is just allowing us to see the detail when we do as do a zoom into it.

So we’re as of March 1, the first day of the next time period after the cutoff date for the adjusting entries. This is where we enter our reversing entries. And we’re back to where we started before we entered the adjusting entries, in essence, because we now have what’s not there, let me refresh the report. I don’t think this is fresh. That looks fresher. Let’s see. So we’re going to go back down and so now that the current portion is gone, and in the long term portion has that 69 879 in it. And then it has the 50,000 down here.

So if I go into the detail then into this notes table and go to the right, it was at before before we did the adjusting entry, the 69 878. And that was the total amount, the 69 878. And then we adjusted it down taking the current portion out to 56 769. That’s where it is as of the cutoff date, which is going to be let me see that one more time. Then we took it down with the adjusting entry to 56 769. And we have the 56 770. So it’s off by dollars rounding. Remember, there’s rounding in that table, and then we put it back in place, which is going to bring us back to where we should be after the cutoff date. So as of the cutoff date, we’re correct.

After the cutoff date, we brought us back to where we should be if I go back, or where we should be according to you know the accounting department Then on this one same thing if I go into that 50,000 and go to the right it was at 50,000 we didn’t adjust adjusting entry to make it correct as of the as of the cutoff date putting it into the current portion, then we put the 50,000 back so that that so that we reversed it. Now note we also put on a crude payable on the books and we may or may not reverse the accrued payable, you may not need to reverse the accrued payable.

So, that’s you know, that’s something we may take a look at in the future. In other words, we also added the interest payable and again, you could say, well, that kind of confuses somebody because what if they want to pay the interest payable then they got you know, once once they pay the interest at the end of the loan, they got to kind of reverse the interest payable. So typically, we would reverse the payable as well might be something we’ll do a reversing entry on and we’ll probably do that in the future. Bottom line is if I change Just date back down to when we’re making the financial statements as a 229 we have properly broken out between the current and long term portion down here. 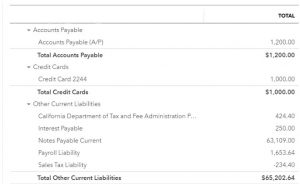 So current portion, now being at, if I go to the liabilities, we have the notes payable current portion and in the long term portion properly broken out, then if I go to the first day the next time period because remember the accounting department has all done all their journal entries for February already, they don’t need to do any work for February they’re going to start working in March. And as of March, we have reversed it bringing it back to what they’re looking at what they’re used to seen. So they see it broken out this way. And therefore in particular this balance up top the 69 878. They can tie out to to the amortization schedule as they make the future loan payments and properly allocate out between the interest and principal