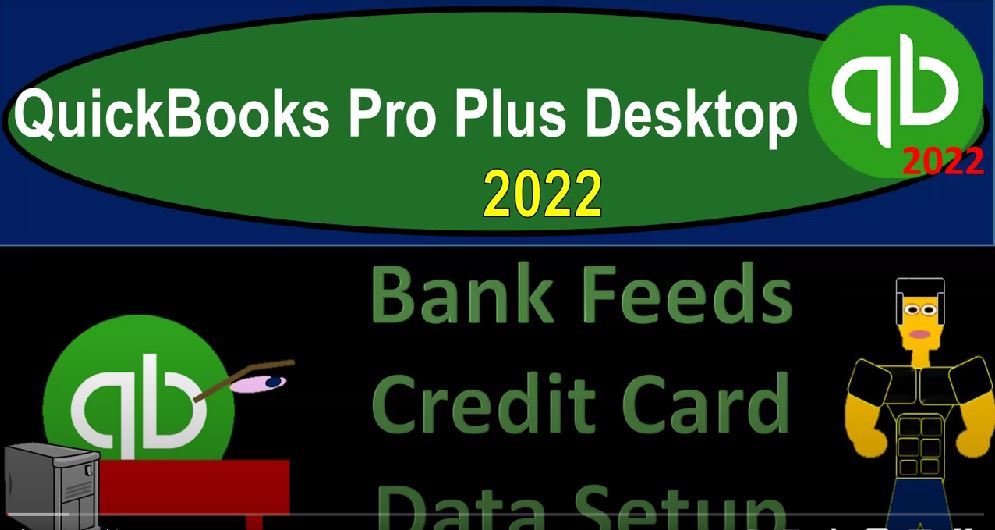 But we would like to add another item up top, this one being for a credit card. So credit cards are going to have financial institutions as well. So you can have the bank feed connection in a similar fashion and do similar type of techniques, drawing the information into the system.

And then having it here in bank feed limbo, and then pulling it from bank feed Limbo into the creation or at least a supporting of the data that is used to create the financial statements, the balance sheet and the income statement. As we have multiple kind of bank feed transactions, we’ll have some inter bank feed type of transactions that we will have to deal with as well.

But most large established credit card companies will have the ability to do the bank feeds and connect directly. If you connect in this way, then you should be able to pull in those those bank feed transactions automatically. We have the same kind of caveat as we do with the standard bank information here that being that you might have a situation where you have a lot more data that’s going further back,

possibly at being the end of the year, you want to get a whole year’s worth of data or possibly multiple years worth of data, to try to create your books for taxes or something like that, you might be limited as to for how far back you could go. You could also try then downloading the data directly from the bank, and possibly being able to go a little bit further back in that format.

So that’s what we’ll try to do next. That’s the next thing we’ll look at. I’m gonna close this back out. Also note, if I open up the window on the left hand side, you could go to the lists drop down to the chart of accounts, and then add opening up the window here another checking account up top a bank type of account. And that’s another way that you can get into the access possibly to the bank feeds to set up the bank feeds for a big type of account.

So let’s just take a quick look, if we were to do the the going to the bank and downloading the information, same kind of process we did before whatever your bank is, you go to the bank, you typically will be able to find some kind of download activity kind of area.

And then you’ll have typically the options that you can download the data in. And and so you can set the date range. Typically, that’s going to be important because you don’t want to have duplicate transactions in your system. And you want to make sure that you’re able to go far far enough back to get all the data that you want.

The typical formats are we’re going to be looking for a QuickBooks type of format. And that’ll be the easiest thing kind of to upload into the QuickBooks system. The other thing if they don’t have that would be the spreadsheet format, which is basically a CF CVC file, which is the other format that you could try to use,

which typically will work fairly well. But most institutions have some kind of QuickBooks file, because even that’s becoming more and more of the standard for the kind of the bank feeds even if you’re not using QuickBooks software.

So I’m going to close this back out. Now if you were to download that information, you would have something that looks like this So now we’ve got the actual software is up here, these data files look kind of like the software. So let’s go back into here. Let’s go into the bank feeds and the data files.

And then I’m going to check out with a data file. So here’s the actual data file that we’re using. Here’s the QuickBooks software that we’re using to open at least a shortcut to it. We opened up last time, the data file from the from the institution for the checking. And then we also look at the see the CVC file,

Once it’s installed, we’ll have the information once again into bank fee to Limbo what I call it, which means it hasn’t yet been included into the financial statements. And then we can go in there will be in the same position as if we took the information directly from the bank connecting to the bank, or if we uploaded it, and then we can start to pull that information into the QuickBooks system.

Now you can get this file in by going to the banking drop down, you could go to the to the to the bank feeds. And it says here, import web connection, that’s one way you could do it. But sometimes it actually recommends that you close everything up, and then just double click on it. So I recommend having this as your last account that you had open in QuickBooks, and then close the software, this is the way we’ll do it here.

Are you sure you want to exit I’m going to say yes, you might want to make up a backup file. Before you do this would probably be a good, you know, good idea, just in case. And then I’m going to double click on this file that we were imagining we downloaded from the institution. Now now just realize that if I if I was to look at the properties for this file, it looks like it’s a QB O type of file the extension.

But that’s just the file extension that the banks are using. And you could use this for QuickBooks Online, or on the desktop version, when you’re basically uploading it to the QuickBooks system. We’re using it for the desktop version here. So I’m going to double click on it, that should open up the software to the last place we were at, we’re going to need the password to get back into it, and then add the data into our system.

And it says it’s going to be a credit card type of account, I’m just going to call it credit card, credit card account. And I’ll imagine it’s like the last four digits of the of the credit card number that I’ll make up here. And then I’m going to say Continue. It says your web connect data has been successfully read into QuickBooks, you can view the download data and bank feeds center by selecting your financial institution.

Now it set up another account, it was the credit card account down here that we set up as we did this process, you could set up the account first if you wanted to, by going to the account drop down, rise up new account and then set it up and tie it into that particular account.

We have everything in the unrecognized areas in bank fee, what I would call bank feed Limbo now, and now we’re going to take it out of the bank feed limbo and process those into our system. Same rules apply as with with before, with with a checking type of account, those being that it should become easier as you as you do this process going forward.

Because you’ll be able to save and memorize more transactions, you can create the same kind of rules once it’s in this area. And so we’ll do add some of this data. It’ll be it’ll be fairly straightforward or fairly similar to what we saw with the checking account.

But we want to focus in especially on those inter account transactions, the ones where basically we’re paying off the credit card say with something out of a checking account. So we’re have a transaction that’s impacting two big feed areas. So we’ll take a look at that in future presentations.