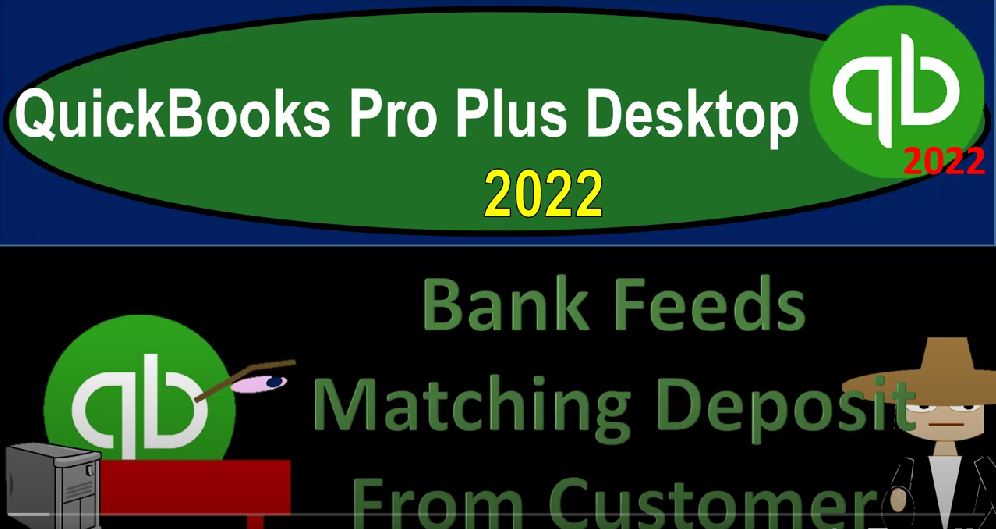 QuickBooks Pro Plus desktop 2022 bank feeds matching deposit from customer get ready because we bookkeeping pros are moving up the hill top with QuickBooks Pro Plus desktop 2022. Here we are in our bank feeds practice file going through the setup process with the view drop down the open windows list on the left hand side company drop down home page in the middle maximizing eight to the gray area reports drop down we’re going to the company and financial down to the profit and loss standard.

We’re going to customize that report with a range change from Oh 101 to 112 31 to one fonts and numbers changing that font bringing it up to 14. Okay, yes, please. And okay, reports drop down company and financial profit and loss standard with the range change from 101 to one to 1212 31 to one customizing that report, go into the fonts and numbers change in the font size up to 14. Okay, yes, please.

And okay, reports drop down again, go into the accounting and taxes trial balance with the range change from a 101 to one to 1231 to one, and then we’ll customize that report with the fonts and numbers and change the font size up to 14. Okay, yes, please. And okay, let’s open up the bank feed center.

And we’re then going to imagine a situation for now we’re going to have the create the sales receipt, then we’re going to receive the payment which will decrease the accounts receivable put the money into undeposited funds on our side, then we will actually record the deposit.

And then we will match the deposit up to the bank feeds just doing a matching process using the bank feeds in essence as a reconciliation tool, as opposed to a tool used to create the financial statements to enter the transaction. Let’s take a look at it now. So I’m going to go to create an invoice starting out the process. Let’s make two invoices that add up to that nine cents.

And we’re gonna say let’s make the first one for customer one. And we’ll say this is on let’s say this is on 10 1015. And then we’ll say this is going to be item three, item three, and the first one is for let’s say six cents, six, actually the quantity quantity one rate will say six cents. And this will increase the accounts receivable the other side’s gonna go to revenue. And then let’s make another one.

Let’s say Save and New this time, save and new. And let’s make this one for customer let’s just make it customer to customer two, we’ll set up a new customer on this one quick add in it. And this will be on let’s say, let’s say this happens on 1016 Customer two and this will be for the item three, this time the rate that we’re going to have is three cents.

And so that’s going to be quantity three cents, no we want quantity at one and then the rates at three cents. So there we have it this is going to increase the accounts receivable other side go into the sales or revenue let’s check it out, save it and close it and that the template field cannot be blank. I deleted the template field.

So we want a standard invoice into it packing into an invoice template. So that should be about the same I changed the template but I think that’s going to work save it and close it. Then let’s go to the balance sheet check out what we did by going to the receivables.

Take a look at the customer balance Detail Report, where we once again have the six cents for customer one, the three cents for customer two. Now let’s imagine the next step homepage, we’re going to get payments from these two customers, we’re going to actually record it on our end not relying on the bank feeds but recording the receive payment, this will be increasing undeposited funds and the other side is going to then go out of the accounts receivable,

we’ll we’ll do the first one for customer one, we’re going to pick up that six cents right there, picking it up, I’m gonna say okay, and don’t show me that again, poor five, or let’s say this happens on the 17th, let’s say the 17th it’s going to go into undeposited funds. Now I could put it directly into the checking account here, you’ll note because I turned on the optionality to do that.

But I’m going to imagine we get these two payments from two different customers and I’m going to deposit them at the same time up up, we could be doing that possibly with credit cards, for example, that could happen, or if we got payments in cash, so that I can’t deposit this directly into the bank, because then when I try to match it up to the bank feed, it won’t be in the same format, because the bank feed was for nine cents,

which is matching these two things up. That’s the purpose of the undeposited funds. So I’m going to save it and close it, save it and close it and then we’ll do it again. Now you can see the number one here, because we got like a deposit that needs to be made. We’ll do it again. This time for customer number two, customer numero dos customer, here we go, that’s going to be the three cents checking it off.

There we have it. And so this happened on the 17 two, so we’ll say that’s going to decrease the AR the other side undeposited funds, save it and close it. There we have it. Now let’s see what happened to the balance sheet. If we go to the balance sheet, where’s our balance at, we’re then going to go into the accounts receivable, it has now gone down, you would expect by those two amounts, six, three, up six, three down with a payment form.

Okay, making this as of the 17th. This is going to increase the bank account, checking other side decreasing undeposited funds, let’s do this and check it out on the trial balance the same, save it and close it going down to the trustee TB trial balance.

And then so this shows all the accounts which is a little bit easier to work with balance sheet on top of the income statement, double clicking on the checking account, we should see that big nine cents, hitting it making this big splash as it hits here on the 17. There it is boom, nine cents deposit.

There’s a deposit form in one lump sum, we’re going to then close that back out the other side is in undeposited funds are went out of undeposited funds is the better or more proper and accurate way to put it. And it went out using the two, two separate transactions here to decrease them.

Basically tying out the fact that yes, that deposit does match what we’ve got on the bank. And so if we go over to the bank feeds, we’re going to see that nine cents right there, which

it might pick up because it now it now looks like it picked it up possibly. Actually no, where’s my nine cents, let’s close up the carrot. Let’s go to the filtering option. And deposits Where did my filter go? I could have swore I filtered it. I could have swore and I missed the opportunity. I had the perfect opportunity to swear and I didn’t do it.

And I regret it because I wanted to swear at it. Okay, so then we have it right here. So we’re gonna we’re gonna match this we’re going to hit the drop down, match it now sometimes it might match this one out if we were to do it in the proper ordering.

And notice that this actual the deposit is before that when we entered the information into the system, so that’s probably why it didn’t match it out because I got the dates wrong. cuz I entered our info, if it was, if this was after it might have been able to pick that one up. But note again, all it really has to pick up is the amount.

So the matching might not be perfect all the time, although oftentimes it will automatically pick it up and then put it over here into the record recognized item. But you got to be careful with it. Because again, it doesn’t have all the information, it’s still kind of guessing when it tries to pick it up.

Well, so we’ll save it, save it. And there we have it. And so that’s in the added to the register now that’s on 930 21. So let’s see, if we open up the carrot, there’s nothing new. That has happened with regards to the financial statements. But it does help us with that bank reconciliation process. So we just basically all we did there say, Yes, we got this information from the bank.

So I’m gonna go ahead and match it then. And we’re going to match it to this to, to not to the 60, I want to see the dates show all dates. And then we want to show that nine cents, which it doesn’t really make sense, because I put this in here after the deposit date. So bear with me on that. Apologies.

And we took and tied it out to what we recorded on our side, which is actually what you’re supposed to do with the full service bookkeeping system, right? When we hit the bank, we’re supposed to record it on our side. And then we look at the bank feed information and say yes,

that matches the bank feed information, which is a double external check that we have done things properly, which we typically do with a bank reconciliation, which we would still like to do here. But this gives us that kind of a step towards the process of kind of reconciling as we check these these items off as we go.

So that would be more of a more of a full service type of bookkeeping system. So next time we’ll talk about what about if we have a crate Sales Receipt item, and then we’ll get into that one next time.