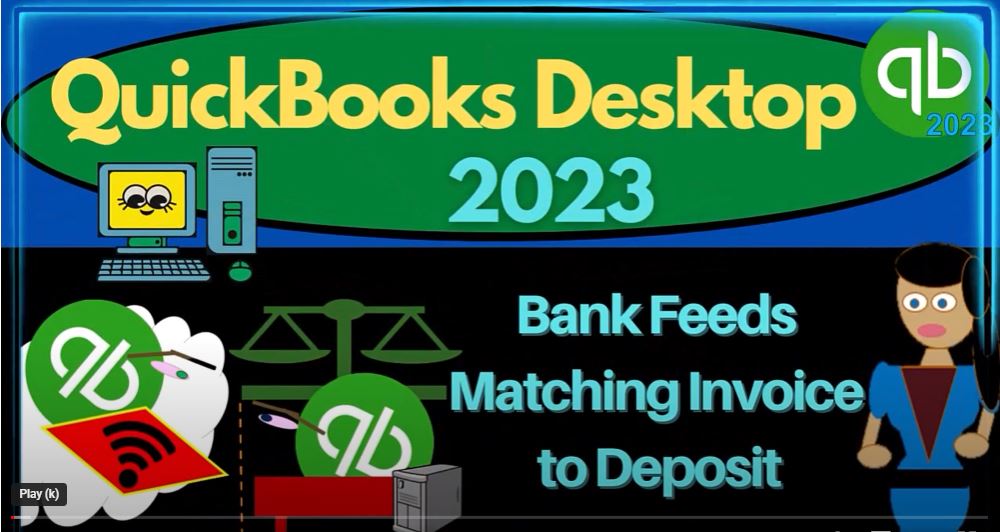 the profit and loss, change that range from a one a one to two to 1231 to and then customize go into the fonts to the numbers changing it bringing it up to the size of 14, okay?

Yes. Okay, let’s go to the reports drop down again, company and financial this top balance sheet, customizing it first and then doing the changing of the range in a 101 to two to 1231 to two fonts to the numbers are going to be changing.

And there’s 14, okay, yes. And okay, we’re going to open up the bank feeds, which are in the banking drop down bank feeds bank feed Center, which would only be there, if you had bank feeds turned on which we have done in a prior presentation,

And we want to think about deposits now that are going to be a little bit more complex. So let’s go back to the homepage we’ve been focusing on in prior presentations,

that deposits would would be related to an industry that would be easy as possible to use the bank feeds to then create the financial statements from something like gig work. So we’ve been waiting, so something actually clears the bank, and then recording it as income, which with in essence, a deposit form,

which we made through the bank feeds. So if you got paid by like YouTube or something like that, if I go to my profit and loss, we can wait till that clears the bank and just use the deposit form in the bank feeds to create our income accounts.

Now we’re going to think about situations that are more complex and how the bank feeds will fit in to either a cash based system where we have to use the create sales receipts, which we’ll talk about in the future, or an accrual system,

So then the question is, well, where could the bank feeds fit in to this process. So we also have the estimate, just so you can see how the estimate might fit in.

So if we’re doing an invoice, first of all, we’re on an accrual based system, meaning we’re going to do the work first, such as might be done in a bookkeeping department, or in landscaping or something like that.

And then we’re gonna have to charge the client for the work that is done with an invoice, which is going to increase an accounts receivable account, not related to cash, clearly, therefore, it’s not going to be related to the bank feeds.

And then we’re gonna have to receive the payment possibly tracking and kind of following up with the customer tracking it within the accounts receivable to kind of collect on it.

The reason we have this added step, which you might not see or be as familiar with when you’re doing financial accounting and like a classroom is because we want to make sure that if we have multiple payments, like multiple cash payments, for example, which we’re going to deposit into the bank together,

we don’t want to have separate receive payment payments on our side going into the checking account, because then we won’t be able to match them to what clears the bank because when we put the money into the actual physical bank,

So we’re going to take up a job we set up an estimate and then we might use that estimate to create an invoice no tene that the estimate doesn’t actually have a financial transaction related to it.

So we’re not going to get into the estimate here, we’re going to start at the invoice. So how does the bank feeds fit into this process?

Normally, you would do the whole process, you would say, Okay, I’m gonna have the invoice that’s going to increase accounts receivable, the other side is going to go to sales,

then we’re going to receive the payment, that usually is going to be increasing the cash account of undeposited funds to clear an account and decrease in accounts receivable.

And then I’m going to deposit it in our system into the bank account here, as well as physically make the deposit into the physical checking account, either cash in the bank or an electronic transfer or whatever it is, then I will wait till it clears the bank.

So there are a couple of variations we could have. Let’s first think about that first variation, I’ll make an invoice and then see if I can use the bank feeds to wait till it clears the bank to then record the deposit or tying it to the invoice how would that look? Let’s go to the bank feeds.

Let’s check it out. Let’s just pick a deposit that we’re going to use here, I’ll pick a deposit, I think there’s a couple Amazon ones that we still have that I might be able to use. Here’s an Amazon let’s use that one. It’s only $9 That’s okay. 958. So 958, I’m going to go to the homepage, I’m going to create an invoice.

And then I won’t even put an amount I’ll put the amount in later, it’s not going to be taxable. I’m not going to deal with the sales tax. And then I’m just going to say that it’s going to go to Sales Revenue account. So then I’m going to say okay, it was 9.589 58 non taxable item. Let’s just double check that that I have the right amount 958 It was on 922 here. So the invoice let’s make the invoice before the deposit on

If we had inventory tracking involved on a perpetual inventory method, then this would also be decreasing inventory, recording the cost of goods sold. But our main focus here is just to see how you can tie out the invoice to the to the deposit.

So I’m going to say okay, let’s save it and close it. Save and Close. Let’s see what that did. Let’s go to the balance sheet. Now we’ve got accounts receivable, double clicking on that.

And that increased by that 958. The other side went to the income statement, the P and the L it’s in the sales item. So there’s the 958 there. If I go back to the balance sheet, we also have the sub ledger that’s going to be tracked, reports drop down customer and receivable that’s going to be the customer balance detail,

let’s say from well here’s here’s the customer balance detail the 958 so we’re getting now our detail on the accounts receivable because we’re gonna have to follow up on that and collect on it. That 958 matches here. You also have that information in the Customer Center,

customer customer center. And we’ve got this customer number one where we have that 958 So we can follow up with the customer. We can send out reports and everything that we would normally do.

Now if I go back to the homepage, the next step is that they’re going to pay us when they pay us And then normally I would, I would enter this transaction here and say we have customer, customer one. And there’s the two invoices.

So I would choose this invoice and so on. But maybe I can just use the bank feeds, I can say, hey, you just pay us electronically or whatever. And then we’re going to be able to tie it out to the invoice using the bank feeds, I won’t go through this process, I’ll just enter the invoices.

And then when they pay us, I’ll tie it out using the bank feeds. So how might that work? If I go to the bank feeds, then we see this amount right here. It didn’t match it automatically, which sometimes it might do, if I had entered the data input in, you know, the reverse order, meaning

So, but if it’s an electronic transfer, we can see, you know who we got it from and everything. So we might be able to match it up pretty easily. By then saying the drop down, let’s go to match.

So we’re in that same field, but this is the edit more details. This is the match. And there’s the two potential matches that we have. This is the one we want the 958. So I’m going to pick that one up.

And so then when I record this, it should do the next step, which was to receive the payment. Now it’s kind of it’s going to be interesting to see what

So let’s just check that out. If I say save to the register. So now let’s go and say okay, what did it do? I would expect it to do the second step right here, right? It would do that second step.

So it records to transactions, recording the actual deposit taking it out of undeposited funds, putting it into the bank account. The reason I think this way that they do it is kind of nice.

you’re going to have some received payment things which make which muddies things up a little bit in terms of just your details, not a big deal.

I want to go to the advanced settings because I want to see all active sales, even if it has zero in it if there’s activity, which I would expect on on earned revenue or undeposited funds to show up if I do that.

And so if I double click on that payment, then there it is. So that’s the standard payment form. That is usually the next step after the invoice so there’s the customer one,

and then move it from undeposited funds up to the checking account. So it actually recorded two forms here. Where’s that nine? What was it nine something? Let’s see if I do I need to sort it by deposit there. I think that’s it.

That’s the one isn’t it? That one right there. Let’s see if I could sort by Yeah, that’s the one. So there it is. So you can see that’s a plot that’s a system that you could set up so I’m gonna go back to the homepage.

So once again, we entered the invoice and then we waited till it cleared the bank. And we use the bank feeds to still record actually two transactions, it record the receive payments, decreasing the accounts receivable other side going to undeposited funds and

then it recorded a deposit, increasing the checking account decreasing undeposited funds. So next time we’ll we can also think of a system where we’ll look at it where where we will enter the invoice and then receive the payment.

And then see if I can match the the deposit to the receive payment recording that last transaction, which is another possible method you could use.

And then of course we can, we can just do the whole thing, and then match the bank feed to the deposit that has already been made, in which case we wouldn’t record another transaction.

But we’ll just be using the bank feeds as a kind of bank reconciliation tool. Alright, let’s just just just take a look at our at our trial balance tick about that. This is gonna be Oh 1012 to 1231 to two and then customize it and we’ll go to the fonts and numbers and change it up to 14.