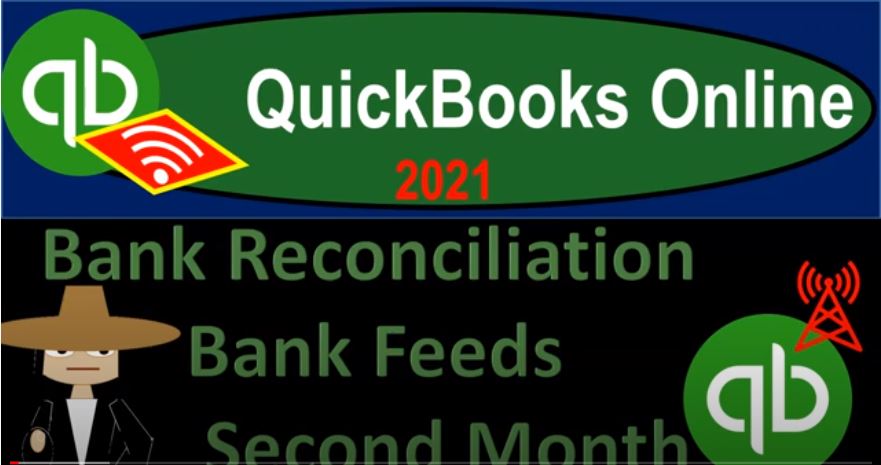 QuickBooks Online 2021. bank reconciliation after having constructed the data with the help and the use of bank feeds for the second month, which should be similar to the normal process for the bank reconciliations, so let’s get into it with Intuit QuickBooks Online 2021. Here we are in our quickbooks online bank feed test file and prior presentations, we set up the bank feeds, we then added the data to what I would call the bank feed Limbo, which would be in the transactions tab.

Now note that I’m going to go over to the flowchart now, which is on the desktop version, you don’t need the desktop version to follow along, we’re just looking at the flowchart. Remembering that as we think about the creation of the financial statements with the help and use of the bank feeds, we can do so basically, depending on the bank, which would be the simplest thing to do, although it’s not really the full service bookkeeping system. Or we could do the full service bookkeeping system entering data ourselves, using the bank feeds as a feature to help us to double check what we have entered into the system.

And that way, it would be part of the process, they could help us with the reconciliation process and be part of this reconciliation type of process. We’re going to assume here, that we’re basically constructing our books from the bank. So we’re not using the bank to kind of double check the books. But we’re waiting until everything clears the bank in order to construct our books. In that case, remember that the bank statement or the bank reconciliation, I mean, has a bit different have a purpose there. Because there’s not going to be any outstanding items, there’s nothing to really reconcile.

But we still want meaning there’s not gonna be a difference between our books in the bank’s books if everything is going correct, because there’s no timing difference, because we’re not entering the transactions. First, we’re waiting until they clear the bank before we enter them into our system. So everything should tie out. But we still want to check it periodically, because the bank reconciliation will help us to determine and see if we have not entered a transaction, somehow something got deleted,

we didn’t include a bank transaction for whatever reason, or something got entered two times, then we can catch those by basically double checking our books periodically, possibly monthly with the bank reconciliation where we get the bank statement, which will look something like this. Notice that bank statement now has the beginning balance, which should tie out to the prior month. And so that if this is the second month of operations, because we already did the first month, then the beginning balance should tie out. And everything should work for quite easily then from that point having the increases and the decreases to get to the ending balance.

Let’s go back on over to our our QuickBooks, let’s open our balance sheet, right clicking on the tab up top and do it in a new tab by duplicating this tab. So we can then open up the balance sheet. In the new tab, we’re going to go down to the reports on the left hand side, open up the balance sheet, the BLS balance sheet, and then we’ll change the dates up top starting from a 101 to 020 630 to zero, because that’s the ending point of our bank statement running that, then closing the hamburger holding CTRL scrolling up just a bit to get to that one to 5%.

We are now at as of June 30 2020 36 to 323. If I go to the bank statement 36 323 is tying out directly to the bank statement. That should typically be the case because there’s no outstanding checks or deposits there we build our books from the bank. So that’s kind of a reconciliation right there. To do that. And and notice again, if you were doing the full service bookkeeping system, it wouldn’t often match because you would have a timing difference, because you would have possibly entered checks that have not yet cleared the bank. So we couldn’t have tied them out yet. And that’s what the reconciliation process would typically do.

But here, we’re just going to basically confirm that everything looks good. And we’ve already kind of checked it off. Now we’ll just do the formal reconciliation just to double check it so it should be extremely easy. We’re going to go back on over first tab. Let’s go down to the accounting at the bottom. And we want to then go to the reconcile tab on the second tab up top, we’re going to be reconciling the checking account. Now I’ve already entered the data in it just to double check so I can make the mock bank statement. But so I’m going to resume but you’ll see the beginning data screen if you’re going to go into there and then you can also see it if I go to the Edit information.

Here’s that beginning data. So notice that this beginning balance of 10,003 7396, I can’t change that it came in from the system. And that’s the beginning balance from our prior period, which should tie out, because we tied it out to the last month. So that’s usually the problem in the first month, Once done, then it should be extremely easy. So then the the ending balances is 36 320 304. So there it is 36 320 304, as of 630 2020, the second month for us of our operations, closing that closing the hamburger excellent out of this, then we have the same kind of layout, we got the statement balance, we’ve got the cleared balance, and then there’s a difference at this point.

So it should be extremely easy to do. So you might as well just go in here and just double check it on a periodic basis monthly, just to check everything off that it ties out. If you’re using a more of a full service accounting system, then you’re gonna, you may have some items here, you typically will that have not yet cleared the bank out. And you’ll still have these timing differences, even though you’re using the bank feeds. And in that case, these the the fact that you might have some of these checked off already, but it might not be enough, you’re still gonna have to go in and tick and tie off every every transaction to find the ones that aren’t there.

And that’s gonna be that’s gonna be the thing. Now, it might, it might all work out meaning like, if you did the full service bookkeeping system, remember that if there’s something on the bank statement, and it’s not on our books, then typically we would have to add it meaning we’re probably missing something. Typically, we shouldn’t be missing anything if we use bank feeds, because the bank feeds would have brought it into our books.

And unless we deleted it or didn’t add it from Bank feed Limbo area to our books, then they should all be there, then we may have something on our books that are not on the bank feeds, I mean on the bank statement. And we would expect that if using a full service bookkeeping system, because we would expect outstanding checks and deposits, those that we have written or deposited that the bank doesn’t know about yet, because they have not yet cleared the bank.

And those would be the items that would not be checked off here because we didn’t check them off with the bank feeds, because we couldn’t match them to anything because they haven’t cleared the bank yet. So if everything works out, even if you’re using a full service bookkeeping system, hopefully these are all checked off perfectly, and the ones that are unchecked, which we would expect normally to be at the end of the month will be those items that are the reconciling items, which would be the outstanding checks and deposits.

However, if this amount is not exactly zero, if it doesn’t work out perfectly, the only thing you can really do normally is uncheck the whole thing. And then and then tick and tie the whole thing out again, to figure it out check in one by one, just a normal bank reconciliation process. So that’s just remember that the bank feeds, if you’re using a full service accounting system doesn’t replace the need for the bank reconciliation, it just kind of modifies it and hopefully makes it easier to do.

But in this case, we’re gonna say finish that up and done with that nice and easy for the second month. And easy process. If you want to check out the reports. Remember, they’re in the history area here. So now we have the second report that we have seen. I think that’s the first one that I go to the first one, let’s go back here, second ones on top. But it’s going to be a really straightforward report because there’s no reconciling items, really the meat of the report, the main part of it,

are these two and if there’s a reconciling difference, then those would be the interesting things meaning checks that have not yet clear checks that we wrote that were being on our books that have not yet cleared, there are none if we made our books from the bank statement, because you know, we’re depending on the bank. So there’s 36 320 304 and this 36 320 304 is both what’s on our books 36 320 304 as of that date, the endpoint 630 2020 and on the bank statement, the 36 320 304. So the report is kind of is kind of boring, but the reconciliation process still worth doing just to give it that double check and see that everything’s proper as of the end of the month.