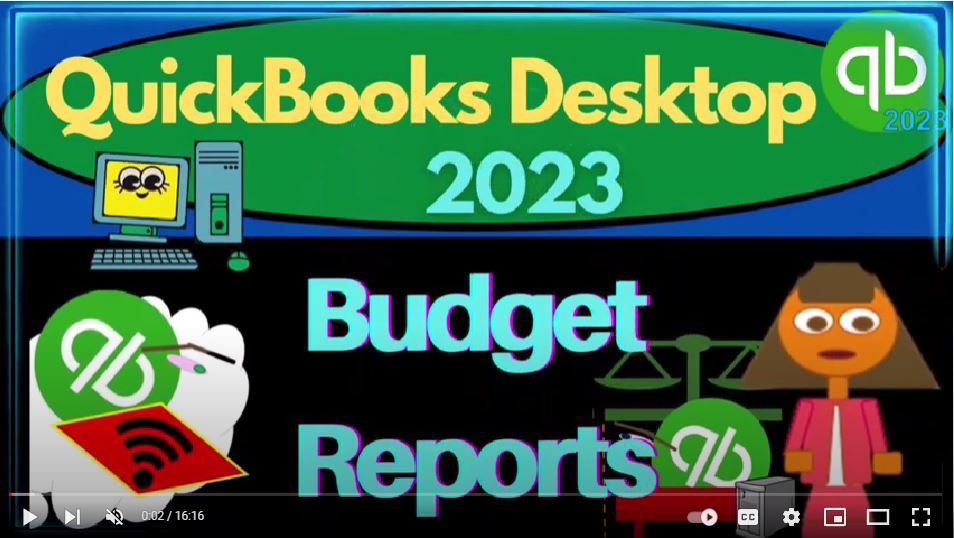 Here we are in QuickBooks Desktop sample Rockcastle construction practice file provided by QuickBooks going through the setup process we do every time maximize on the home page to the gray area of view drop down,

noted we got the highest Icon Bar, open windows checked off open windows on the left hand side open, go into the reports drop down company and financial open up the profit and the loss changing the range in Oh 101 to four to 1231 to four January to December 2024.

Customize it. fonts and numbers change it 12 it okay. Yes, it Okay. There we go. Reports drop down again, company and financial this time the balance sheet report, we’re going to hit the drop down and go to the this fiscal year, customize the report fonts and numbers.

We want to change the font to 12. Okay, yes. Okay. That’s what we do every time that’s the setup process, we got the major two reports balance sheet income statement or profit and loss,

remembering that every other report pretty much is going to give us more information, more detail expand upon one or multiple line items.

And the major two financial reports that we have opened here, balance sheet in the income statement. However, this is an exception to the rule,

then your job typically is to take past data entered into the system to create the end result of the financial statements balance sheet income statement and supporting reports.

When you’re looking at a budget, that’s different, because now you’re projecting out into the future. So we as accountants have some ideas on how to format the budget. And we have past data on which we can start the budgeting process.

But we cannot create a budget into the future without or at least not one that takes into consideration management’s thought process about the environment into the future, but only past data. Because we need to know other things from the budget,

We in the accounting department? If we’re not the management of the company, for bookkeepers, for example, then we don’t have that kind of insight in and of ourselves. So if someone asks us as a bookkeeper, for example, to do the budget, and they’re like,

What about budgeting, then that’s the kind of thing you want to explain to them, you can say, well, I could put together a budget based purely on past data.

But that’s not usually the grounds are the sole grounds on which a budget is created. Because usually we have to take past data and then whatever you think, is gonna happen into the future, or whoever is management into the future,

so that we can then make accurate projections into the future. And then we can make comparisons about what we actually do, compared to those projections, what we were hoping to be happening in the past.

So one more time, if I go to the homepage, just to reiterate this, these items, were entering into the system, bills, pay bills, invoices, receive payments, these are all transactions that happened in the past that were as they’re happening, we are entering them into the system,

When we create the budget, we’re typically going to take past data, we’re typically thinking about a Profit and Loss report because that’s the performance report and then trying to predict based on that as well as other inputs, what’s going to happen into the future.

Okay, that said, let’s go to the reports drop down. Let’s go to the the budgeting down here. This is one way you can get there. The main two budgets are the budget overview budget versus actual.

We can also get there by going to the Report Center up top maximizing it to the gray area, go into the account and taxes. There’s that’s not the one budgets.

That’s the one we want. Here’s our two main reports. If you haven’t entered a budget into the system, you’re not going to have anything in these reports.

they’ve already made one in this system. If we had multiple budget, which we can pick the budget, we could make budgets for balance sheets and income statement. We’ll talk more about that shortly. Let’s go ahead and say next, next, and okay,

here’s the budget that has been provided for us by the practice file, let’s take it from a 101 to four to 1231 to four. So, by default, they usually have it for a month by month budget.

So each month up top, and then the total on the end, we could change it by hitting the drop down and see it as we have seen with a Profit and Loss report, we can see it by month, and we can see it by quarter, if we so choose.

And we can see it by the total by basically the year. So the budget, if we imagine this system, note that this is projecting what’s happening into the future.

So if you were to build a budget, you’re probably going to take the prior year data, let’s imagine it was the end of 2023, you would run a profit and loss would often be your starting point as of 2023,

in that case, and then you would look at the performance for the prior year as your ground bases the starting point to project or think about what’s going to happen into the future.

It’s the one that’s showing you where you went from how far you went, like we had the analogy of driving, if you reset the odometer,

As of that point, the income statement primarily would be the driving or the performance over the time, which would lead us to where we would end up at the end of 2024.

So we’re thinking performance, how far am I going on a month by month basis, we’re typically first thinking about a balance sheet.

Now when we get into the budgeting section, we’ll talk more about how to create a budget a little bit more, we’ve got full courses on creating budgets budgets are could be a whole course and in and of themselves above and beyond, again,

And if you didn’t have a budget set up, they would go through a screen to pick a budget would look something like this, you can create multiple budgets. So if I created a budget up top,

I choose the year, I choose whether it be a profit and loss or balance sheet budget,

you could do either the profit and loss would be the default, typically when you first create a budget. And so there we have it, I’m going to close this out, because I’m not going to make a new one.

And go to the company drop down planning and budgeting, set up budgets. And then you’re going to just basically so notice what we have here we have an income statement, just listing out all the accounts on the left.

How would you possibly know how much to enter per month, you would typically create a profit and loss from the prior year as your baseline starting point.

And then and then possibly start by saying I’m going to take these numbers on a year, a yearly basis and divide it by 12. And that could be your starting point to have an even number in each month.

Or you might try to get more complex with that. You might say let me run an income statement for the prior year. And I’ll run it by month because maybe I have a seasonal business or something like that.

And so I can then predict what happened or I can see what happened in the prior year on a month by month basis. And maybe that’s your starting point. And then you’d have to adjust that with any other kind of adjustments that you had.

So oftentimes, people would start by by say, I’m going to make a profit and loss exported to Excel taking to consideration any other factors such as the economic environment, changes in our management policy,

hiring and firing more people or whatever we’re going to do, and try to predict what that’s going to have an impact on why we’re doing it on the financial statements. And then once you have that in Excel, you can then import it into into your budget.

You might ask, Well, why in the world would I import it into QuickBooks if I already have it in Excel? QuickBooks then is good at running reports, such as the budget versus actual.

So once you have a budget, then you’re going to want to look at the what actually happened, versus what you budgeted to happen.

And see, if you hit the target how close you were, and then re up the budget. That’s the planning process. So given that, then when we when we run the actual budget, we can see it like this.

And we can change the range January through 1231 to four, there it is. So now we’ve got the the month the budget, and then the the difference between the two.

the comparison each of the four quarters. So if I Well, let’s look at it just for like the year first, if I looked at it for the year, now you’ve got this kind of comparative report.

Five the budget. So we’ve got a big difference. And if I divide that out, the percent here is working, because it’s not, it’s not really a change. So it’s not exactly like a horizontal analysis. Instead, we’re going to take the will actually happen 2082 to 5.42,

So we can see that change that on a percentage of the budget basis as well. And so that’s going to be the general outline of the budget.

And then of course, on a on a on a month, I’m sorry for the first quarter compared to the budget, and then the difference and the percentage change.

And obviously as time passes, then we can see these changes and say why in the world were we so off on this particular line item and so on. And we can update the budget going forward.

And the goal then being to try to predict what we think is going to happen, try to make decisions, try to guess what’s going to happen in the environment into the future.

Try to think about how many people we should be hiring and firing and what departments we should be focusing in on and so on, we’re going to make predictions on why that would be the case.

And then we’re going to compare what actually happens, determine whether or not we were correct or not. If we’re not correct, then we make new estimates.

the budgeting process is not something that automatically falls entirely into our category of things to do, because what our primary task is to create flight past transactions and enter them into into the system to create the financial statements and supporting reports.

But we do have the knowledge as accountants on how the budget will be formatted. And we do have the past data as a key component to help us predict what’s going to happen into the future.

So if we’re going to be doing budgeting or included in the budgeting process, then we’re gonna have to be working with management in some way as a bookkeeper

or the accounting department or possibly it’s our own business where we are the manager, and then we’re gonna have to make those other predictive decisions in terms of policy for the business.

What’s the impact on the budget, possibly starting with the prior year budget as the ground basis, and then most likely do the budget like Enix