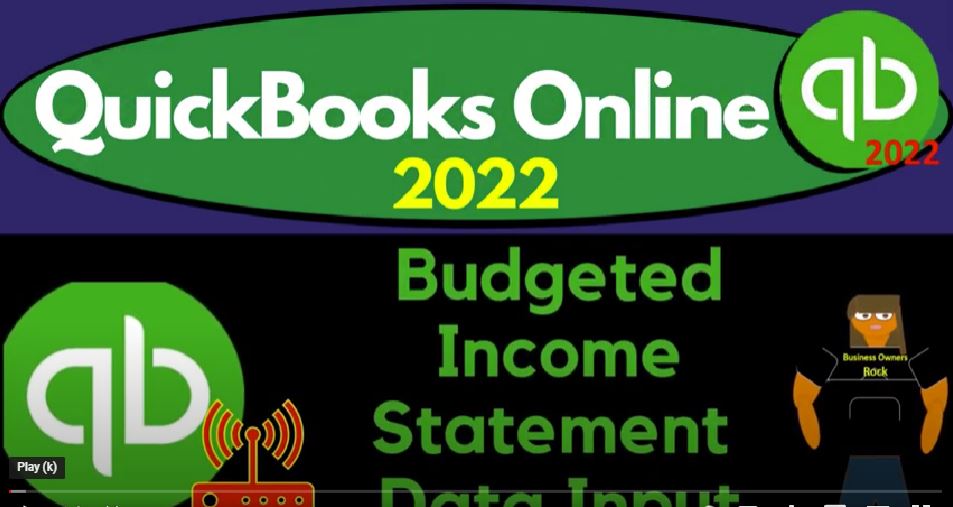 QuickBooks Online 2022 budgeted income statement data input, get ready because it’s go time with QuickBooks Online 2022. Here we are in our get great guitars practice file, we set up with a 30 day free trial holding down control scrolling up a bit to get to the one to 5% currently and the homepage otherwise known as the get things done page and the Business View app. There to the accounting view,

And we’re going to then take a look at the business overview again, go to the reports on the left hand side close up the hamburger this time the trial balance the trustee TV by typing it in not the trail balance but the trial balance I before a I before a we’re not going on a trail, we’re not going hiking over here. Oh 10122 on the range change Oh 228 to two and run it. There we have it now in prior presentations,

we discussed that we’re going to make a budget. When we make a budget, we don’t typically think about actually creating the budget kind of inside of QuickBooks, but rather take the path data from QuickBooks exported possibly to something like Excel, then use that to create the budget.

So the budget also often being thought of as a profit and loss, in essence being the major component of the budget, because that’s the timing statement of what we expect to be happening in the future based on past information.

So what we did then, is we thought about the past information that has taken place in the last two months to two months of data input we have in place is all we have for this company file, January and February, we exported it to Excel but not in an income statement format,

but rather on the trial balance, because the trial balance doesn’t have all the sub totals down here so that we can easily clean it up and just have a very basic income statement without all the subtotals. In it, we exported it to Excel cleaned it up.

So it looks like this. And then we projected out into the future starting out by taking those two months kind of imagining that they were actually the prior two months, like December and November of the prior year.

And then projecting them out to a monthly basis for 12 months as the starting point, taking these numbers divided by two since this consists of two months. And then we went back into it and got a little bit more complex with our budget thinking about what changes might happen for things like people just getting recognition,

And note that if you’re a bookkeeper or something like that, this this is where you the budget if someone’s asking you to do the budget, that it’s something you got to say, hey, look, I got to work with the the owner in order to do the budget because you’re the one planning the company.

I’m the one entering the data input to help you to plan I provide the financial statement information. I can make a basic budget based on past history. But obviously again, the budgeting thing takes into consideration a management of the company or the owner of a company, if it’s a small company with an alignment in conjunction with the accounting department,

so the accounting department could provide the data and then also possibly help to format the budget and then get the budget back into the system so that we can then do budget reports budget versus actual reports as time passes being one of the main reports we will use. So to enter the budget now, going into the cog up top in the first tab and we’re in the Tools area.

And you can see obviously, the the items below changing as we go through these, you could do a yearly budget, most common most likely would be the monthly budgets, they could track this information on a month by month breakout.

Now you could experiment with the prefilled data, like the 2022 data, for example. Or you could take like the 2021, which would be common taking the prior year data to as your starting point going forward. But again, that’s just a real basic starting point. So if someone did ask you for a budget,

and you’re like, you’re the accountant and they want a budget, well, that’s what you would do, you would take the prior year data, and say, I’m just gonna make a budget, you could do that quite easily. But it’s not a very detailed budget at that point.

So what we’re gonna do is say we don’t want any of the data, because we want a fresh starting point and put in what we put in place with Excel. And then it says, subdivide, don’t subdivide, or customer, I’m not going to subdivide here. So we’re going to say next.

And so now we’ve got our data input fields. And we can, these are a little bit funny the way they kind of move around, but not too bad. So we can put this data in the system now.

So this will be a bit tedious with it’s a lot easier with two screens. So I’m going to actually go through this one by one. So we’ve got the billable items up to 1000, or 100 billable. Now, if we just copied across that makes it nice and easy,

I could just basically copy it across. And there we have it, we don’t have the other kind of formats that are as as nice to like, multiply it across, or something like that in the online version they do in the desktop version.

So I kind of wish they would pick that up on the online. But in any case, I’m going to say that that one is done, I’ll make it green for it being done, let’s mark it off as green here. And then we got the equipment is 1130. Let’s see if we could find the equipment there. 11301130.

Now this one, we’re going to say that it’s going to increase by that 10%. And notice, again, it would be nice if I could take the prior cell over here, and then multiply it times the 10%,

they don’t really give us that option. So I’m going to actually have to fill this in manually and say okay, that means that this is going to be 1187. About there’s a rounding involved 1187, tab, and then go and say Okay, the next one is 1246. This is a lot easier with two screens, 12246, and so on and so forth. I’ll jump forward.

So now I’ve entered it for the whole thing here. And so you got the totals at the 17 988, which ties out pretty close here, it’s going to be off by rounding because I’ve got pennies 17 988.

Now note, QuickBooks is going to have all these other accounts involved here. Because remember, they had that huge chart of accounts that we didn’t really clear out.

So we got to do the same thing, because it’s not the same 32 148. So I’m going to copy this across. So I have the whole way, same kind of idea. So after copying that across, we got the we got the 624 996 According to my table here. So we’ll just enter these one by one from the table, these numbers here, and then I’m going to make that green. Next one is the services, which we increase by 1000.

Indeed, that’s what counts the deeds, the deeds done and ties out 20 297-720-2977 Cost of goods sold, the expenses, by the way, should be a lot easier. Because we’re just going to copy those across most likely.

I believe is good. So let’s go back to the worksheet then again, make this green. So now we’ve got the bank fees, 18, this is going to be all the way across. So I just got to find those bank feeds.

And it’s kind of funny, this one kind of hangs around there, which is a little annoying. But whatever. So I’m looking for the bank feeds, which is there they are there under the general.

So I’m going to say This down here is going to be the one eight, so just 18 otherwise known as 18. Copy that across. So nice and easy. Next one is the insurance, which we did something funny for so let’s find the insurance.

Where’s it located? There it is, enter next expense, and now I forgot the number was 190 90. Across copying it across. That looks good. So I’ll make that green.

Sorry about that. Six times eight, three. Okay, copy that across. Okay, and then we changed it in July 768 to July is here. 7682. Copy that across for the rest of the year and the related taxes at that point 535535. We’re going to copy that across 535 and copy it across.

How many times do I have to say it, that’s what it is. Let’s make that green utilities, we’re going to go down to the utilities 634634. On the utilities, there it is. Make it go down 6868. For utilities, copy that across.

And other I don’t really like it down there personally, but we’ll put it down here. For now, we might have to change that I’m not happy with that 212361236. They might do that, because it’s a non cash item to say it’s not a cash flow item, possibly. But still, that’s not that’s not normal accrual stuff, I don’t think so whatever. So I’m going to make that green.

And then finally, the last one we’re gonna have to do something different with is this the last one miss miscellaneous actually know the interest expense we changed, making it go down by the point nine, five of the prior one. So we’re gonna have to change this all the way across. So I’ll do that here. Okay, so I’ve entered those in the total comes out to the 3073,

we increase it point, that point, we decrease it point nine 4.5% of the prior period 3074. So there’s a rounding difference, and that’s okay. And then then we finally have got the other miscellaneous, which also was put down here.

we could kind of check it out here, we can look at our totals down below. But it might be easier to just generate the report, check it. And then if there’s a difference, we’ll go back into here and change it.

So we’re going to close this out for now, I think it might be easier to actually run a report, we’ll do that next time by going to the the items up top, going into the reports on the left hand side, I think it’s easy to find easiest to find them by just typing in budgeted reports.

And then we go into the budgeting. And then we can choose that particular budget notice you can make multiple budgets, we can edit this particular budget, and then make any adjustments we need to do. We’ll continue with that next time. So if I have any errors here, if you say hey, there’s a problem, you missed it something we’ll take a look at it next time.

And in any case, it’s really just kind of a practice problem to see what the data input process would be with our with our mock data. So bear with me if I’ve got any, any issues or errors at this point in time. We’ll continue with it next time.