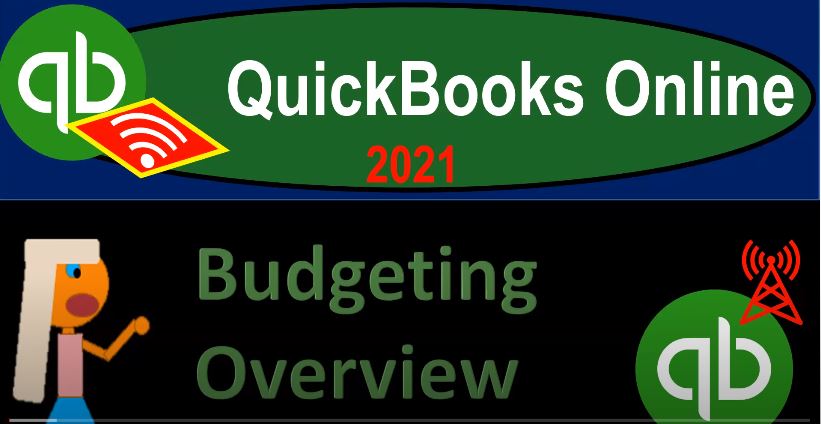 QuickBooks Online 2021 budgeting overview. Let’s get into it with Intuit QuickBooks Online 2021. Here we are in our great guitars practice file, we’re going to give an overview of the budgeting process. First, let’s open up our financial reports that being the balance sheet and the income statement. So we’re going to go up top to the tab up top, right click on it, duplicate that tab doing that one more time, right click it on the tab up top and duplicate that tab.

So we’d be adding the new budget, then we have our name options, I’m just going to call it budget one, and then the fiscal year, so we’re going to be doing the fiscal year for the 2021, then the intervals, the monthly is probably the most common, but you can do it on a yearly or quarterly basis as well. So if we choose yearly, we’d have the yearly column, quarterly, we got the quarterly common columns, we’re gonna stick with the monthly columns here. And then we have the prefilled information where you can take the prior year information.

We’ll talk a little bit more about that later. Because that gets into how are you going to construct the budget, how are you going to put the data into the budget, and then we have the option to sub divide by customer. In the last option, we’re going to keep the default as don’t sub divide here. Now down below, we basically have an income state, so they just lined up our income statement. And then we have it by month up top. So that’s going to be your your grid, that we have to input the budgets, we basically got the income line items on the left hand side, and then we have the date range on a monthly basis, given our option that we chose up on the top.

So in other words, once we have the data in QuickBooks, if I was to enter this budget into the system, then QuickBooks can help us to generate reports such as budget versus actual type of reports, which can be useful for analytical purposes. But then the question is, well, how do I get the information that I’m going to be putting into the budget, then for that,

I would use another tool other than QuickBooks, which would typically for me be Excel, meaning, we’re going to take the information generate, what the budget should be, basically, within Excel, and then take that information that we have generated and put it into QuickBooks, we’re simply going to data input it into QuickBooks, so that QuickBooks can help us to generate reports as time passes, meaning as time passes, then we’ll the standard process will of course be we will predict what is going to happen in the future.

And then time will pass as time passes, then we can run reports that will say a comparison between what we predicted to be happening to what actually happened and give us those differential type of reports. So what we’re going to do in the future is enter the whole year’s worth of information. Notice in our practice problem, we have already entered data for January and February of 2021. So we’re going to enter the data in the budget, pretending it’s back on before January and February. We’ll enter it for the entire year on the budget team basis.

And then we’ll pretend we’ll be thinking that January and February had been passed. And we can then check out the reports that can be that can be generated comparing the actual versus the budget. And then of course, everything from March on to December is we’re imagining in the future, something that we haven’t gotten to and we’ve entered the budget into it so that we can then have a line or that we’re shooting for right. That’s the goal that we’re going to be going towards.

And that’s similar to like, if you’re thinking about someone running a race, if you’re trying to think, in a situation of how far can a car drive in so many hours or something like that, then you’d have to reset the odometer, and then you set the the hour and then you set the car, drive it and see how far it can go in the hour, right? That would be a similar situation for us, we’re going to reset the odometer for the profit and loss, revenue and expenses.

And then we’re going to see how much revenue and expenses are generated in the next time period, that being a month or the year. That’s our, that’s our timing statement, as opposed to the balance sheet over here, which will tell us where we stand at a point in time, we can’t have a budgeted balance sheet. And that’s useful to have as well. But the balance sheet is going to tell us where we are, as of a point time in the future. So in other words, if we’re at this point in time right now, and we predict that we’re going to for the mileage method for that mile example, if we predict that we’re going to drive so many miles, then we can predict where we will be in the future.

And that’s the same thing for for our financials, right, if we know the balance sheet at the starting point, the beginning of the year, and we budget out for a year predicting what we’re going to do in terms of revenue, and expenses, then we can have a decent idea of where we will be at the end of the year. However, of course, there are other complications with the balance sheet because we could have, you know, we could spend money on investments and things like that.

So we could get into a lot more detail in terms of how you get to the balance sheet and what a full kind of budget looks like. But that’s probably beyond the scope of a QuickBooks course, we do have courses on that. And that kind of skirts the line as well between like bookkeeping, and financing, because when you’re doing the or the accounting and financing, let’s say, because when you’re doing the accounting side of things, of course, we’re trying to take the information and put it into the system as accurately as possible.

So there you can get into a lot of detail in terms of what’s the best way to budget and how do you project out in the future, you got finance, you got managerial accounting, that both get into that kind of analysis. And then you got the logistical component of how do you do that which is going to be basically accounting right where you tell me what you think’s gonna happen. And then we’ll, we’ll project it out into the future, and then we can put it into the QuickBooks here, and QuickBooks isn’t comes in play with the data input, that we can then take our projections and put them into QuickBooks, so that QuickBooks can then give us nice comparisons.

That’s the point of the QuickBooks, QuickBooks is there to give us the reports going into the future. And if you are, by the way, a bookkeeper, or in the accounting department, then you kind of want to know where your role is, obviously, the if you’re working for someone who owns a company, their role, of course, is that type of thing projecting out into the future, trying to make the decision making process manager accounting kind of decision making process.

Our goal then is to take that information and the actual information and projected information that they want, put it into the QuickBooks system so that we can generate the most accurate reports on which they can then project out you know, into the future and make their decision making processes into the future. But here, of course, we’re going to be focusing in on the income statement. So we’ll think about the income statement, then how would we generate a budget into the future, the most common way is to take a look at last year, that’s at least the starting point.

And do you start with the past what you know what happened in the past, and then you and then you try to make projections into the future, make changes basically into the future, based on what the current state of the economy is and what you think’s going to happen in the future, how your business is going to grow changes to advertising changes, and how much you think you’re going to invest in, like capital investments, for example.

And so that’s going to be the process for basically generating the budget. Once I have the budget, then we’ll put it into the QuickBooks system. So how can we start that process of thinking of putting together the budget, I would start by basically taking either the income statement or or basically the trial balance, exporting it to Excel for the prior year, right, we’re going to take the prior year numbers, export it to Excel or use whatever numbers we have, export it, then to excel then project out into the future on a monthly basis, possibly taking the year numbers for the full year divided by 12 and look at the monthly numbers. elta, we can actually take the monthly numbers for the prior year, and use that as our as our projection basis.

And but base it in some way on the prior year and then start to make adjustments within I would start with Excel, the projections, we think that are going to be different in the current year based on the state of the economy, based on our investments based on the amount of advertising we increase and decrease, and so on and so forth. So that’s what we’ll do in future presentations, that kind of work, that kind of projection work, I would think Excel is the best tool to do that.

Then once we have that projection set up in a grid in Excel, we would rather put it we want to put it into QuickBooks, why would we put it into QuickBooks when I already have the information in Excel, because then in QuickBooks, we can generate the reports we can generate nicer reports than we can in our Excel. And we can more easily make those reports that are going to be comparing what actually happened to what, what we predicted to happen.

So it’s nice to have it all in one place. And to be able to use QuickBooks to generate reports. So that’s what we’ll do next time, we’ll start to export the data that we have. And then think about how we can use projections on it. Obviously, we don’t have the prior year data, because we started our business here in 2021. So in that case, we’re gonna have to use whatever we got to kind of be our starting point and then and then make our budget from there. And then we’ll take that information and put it into the QuickBooks system as a budget, and then we’ll take a look at what QuickBooks does well, which is to generate reports with that data.