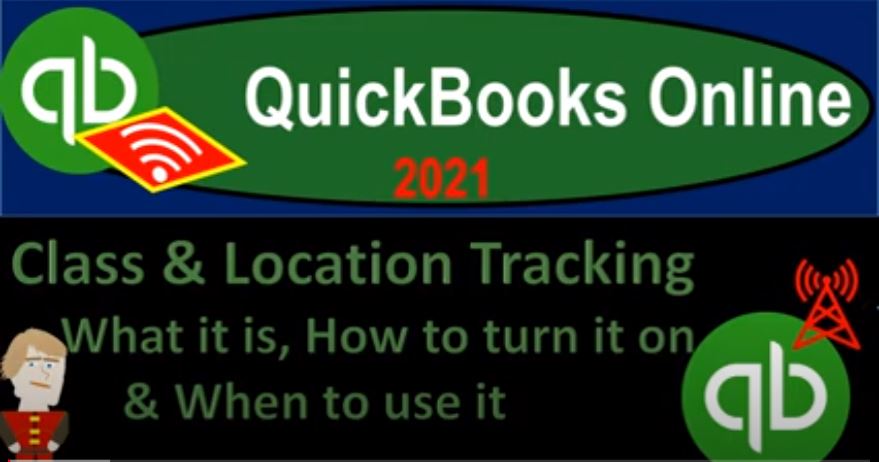 So therefore, you’re going to turn them on if you’re going to utilize those those components. So I’m going to close it out before turning them on however, and then just kind of think about what we would want to do or why we would want to use them. There’s kind of a wide range of things that we can do with the class tracking, we can sort out different locations, obviously, we could sort out different basically departments within an organization.

We can even use class tracking to be breaking out for a sole proprietorship, one account that can be doing both our personal books, as well as our business books, which can be useful ways to be tracking this out as well. What you want to imagine, is a breakout on the income statement in a kind of like a vertical breakout, as opposed to what you might do with sub accounts. So for example, let’s go down here and say that we went to our chart of accounts down below.

And let’s imagine that we have two different locations. And let’s just pick an account here and say we have the utilities account. And let’s say that, that we want to break it out by two locations or to different departments, or I have a personal utilities and a business utilities. A couple of ways we might set that up, we might say, well, maybe I’ll set that up with sub accounts, right, you could say, well, I’ll set that up with sub accounts.

so I can break it out in that format saving that. Let’s open up our income statement to see what it looks like to open up the income statement. I’m going to do it in another tab by going up top right clicking on this tab, duplicate the tab, duplicate the tab then we’ll take a look at our income statement. So I’m going to go on down to the account. tab down below, I’m sorry, the reports tab down below, take a look at the P and L, the profit and loss, otherwise known as the income statement, we’ll do a range change up top, a 101, to one to 1231. To one, let’s run that report. And that’s one way we can kind of break this out.

That’s a vertical breakout. So if I was to close this, you can see that that I can condense it, which is nice, I can expand it, which is nice. So if I do that, however, every expense account, it can get quite long. And you might say, well, that’s nice, but I’d kind of like to see it in a separate column. Maybe I’d like to see it in a whole nother column here. And that’s what the class tracking would do. Instead of having it broken out by account here, I might might want one utility or even two separate utilities, but also break it out by column. And that would also give me a net income, basically buy the class or in this case, like the location.

So let’s turn on the class tracking and see what that will look like. So I’m going to go back to the first tab. And I’m going to say, all right, well, let’s Oh, the other thing I want to just check out is the forms that will be affected. Notice that if I go to a form like an expense form, I’m going to open up the new tab, and open up say, an expense form like a check or an expense, we’ll have the same kind of things here. And notice that what we have is the category and the description, and amount fairly basic.

Now if we add classes and or locations, then we’re gonna have to have some format on here to assign every transaction to a class or location, and or location, that’s why they’re typically going to be off because that’ll more complex or add a level of complexity to the data input forms. So let’s add then class tracking and see the impact on these forms and on the financials. So I’m gonna hit the drop down here, we’re going to then go into the, to the accounting and settings or account and settings, we’ll turn on the class tracking by going to the advanced on the left hand side, then we have here the categories class, and location, these are separate.

So you may just want to use one or the other you don’t need both of them on. But I’m going to turn both of them on one of the differences is and it can be a little bit more confusing. Now that you have these two items and the desktop version, I don’t think they have like the two like the location and class at this point in time. So it’s a little bit added information, which can make it a little bit more complex to some degree as well. But the classes you can break out by anything, obviously, you can use any kind of class you could do, you could you could use locations for different things than locations, but obviously, primarily, it’s given for location.

One of the differences is that the location basically you got to assign the entire transaction to a location typically, where the classes you can split a transaction. In other words, if you have like an expense type form, you can have one expense go into one class and one expense go into another class within the same expense form. If you hit the little question item here, it says add a class field on forms. So you can assign transactions to different segments, like departments, locations, product lines, here we have ADD location field on forms.

So you can assign transactions to different locations like stores, sales regions and countries, then I would also typically check this off to warn, so warn me when the transaction isn’t assigned to a class. Meaning when you have the class tracking on, then you probably want to by default, always assign a class out. If you do not sign up on a class, then it’s going to go into an unassigned category, which is fine. And you can actually go back in there and check it by the unassigned category. But normally, if you have class tracking on, I would suggest setting up the system. So every time you enter a transaction, you assign a class.

And then if something is unassigned to a class, you know that an error happened. And you can go back into that transaction from the endpoint from the income statement and reassign it to the proper class. And then you have the drop down here, you can have one to the entire transaction, which would be easier. So you’d have one class for an entire transaction. But part of the point of a classes is the fact that you can have one to each row of the transaction that allows you to have separate classes assigned to one form like one expense form having expenses broken out to different classes. So this you probably want that that’s the default. And then down here,

we’ve got the location label, which you can call location, business department division, property store territory, whichever you think would be best with the classes, you can actually assign the, the, you know the class categories. As we go, we’ll set up the classes as we go. So let’s go ahead and save that. So if we save that, so now these two things are on in the advanced category, I’m going to say done Down here, and that should assign it out. So now we can, we can basically go into a form, I’m going to go back into the same forms that we have used.

So I’m going to go back into the income statement here, where we have these two transactions drill back down in on it. So I’m going to go into, say, utilities here, let’s go into the utilities item. And there we have it for Location One, I’m going to go into it again, drilling back into it, that takes us to the actual form, this is the form that was used. We saw before that the form didn’t have this other column here. So now this column for the class has now been added, as well as this item up top for location. Now note between these items.

Now you can see down here that since I have the class down below, I can actually have two different classes for the same expense form, meaning that the expense form is going to be decreasing the checking account, that’s when an expense form does. But I could then assign one class to say, say one area, and then I can have another line here, which has a completely different class. And that will assign to classes with one form, whereas the location item only has one line in the location.

So there we have that in the date range is covering what we have there. So we’re there we have it location, here it is by location. And this is what we mean by the fact that you got this column up top now. So now you got location one. And that was the entire transaction that was applied out to location one and then not specified, because for the other transaction is 200. We did not specify a transaction. If I then go to the classes, over here, we have in the classes tab, we’ve got D one, because that was we’re saying department one, and then we’ve got the not specified because we didn’t apply a class to the other item, we still can have two accounts down here,

if we so choose, now showing it in Location One and location two by account as well. But this is not necessary, we could then collapse this and just have one utilities account, breaking it out by department in this case, and then over here by by location, in this case, so you can have multiple utilities accounts or or not, if you so choose. Also note, if I go back to the first tab, which is our normal profit and loss, which only has one column, you can make a normal profit and loss by class or by location by hitting the drop down here, and then choosing the locations.

And then on the location side of things, if I refresh this running it again, we have the same thing, Location One and location two, nothing that has not been assigned to a location so that is good. We then once again can break it out with further detail by location one and two, or we can just simply use one utility account that we can break out between two location categories. So that’s kind of an overview of what we can what we can take a look at. We’ll go into more detail about it in future presentations.