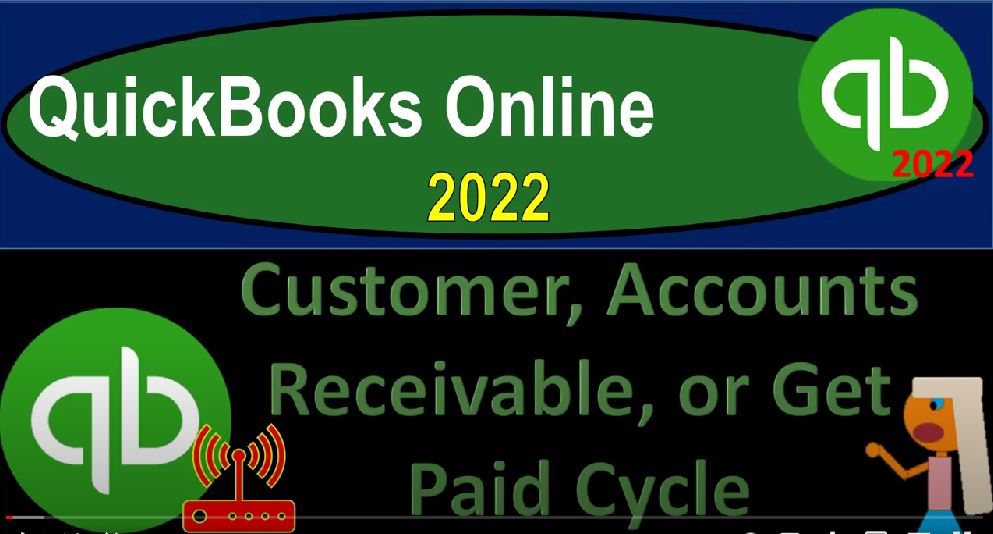 you want to be able to visualize these forms in kind of a flowchart type of set up, and you want to be able to customize what that flowchart looks like in your particular business. Once you know that, then you can go right into this center here, you can also go and you might be working if you’re working on the like the customer side. And by the way, just note also, you could call this cycle, you might call it the customer cycle, because the customers are ultimately going to be paying you this will ultimately be hopefully the source of cash that’s going to be increasing the cash in the company.

And then you can go to your customers over here, there’s going to be your information with regards to your customers. And then you’ve got your documents or the new customer. On the right hand side, you can also go to your invoices, and you’ve got your drop down to create another invoice and receive payment with regards to the invoices. But with before we get into that,

I’m going to go back up to the overview, let’s take a quick look at what it looks like in the Business Center and the free 30 Day file trial version, we still have the plus button up here, of course, but then they called the center the Customer Center, they put these two things together, they get paid. So when the Get Paid center over here, which isn’t the name that I would typically call it. But now we’re down here they got these two things together. And then we’d be up here in like the customer area.

So you got a similar kind of layout, but it’s going to be in that get paid center. So same kind of concept. So let’s go back on over to the homepage. And we’re in then the desktop. Let’s go to the dashboard. In Craig’s design and landscaping. I’m going to jump over to the flowchart. Note that we have a flowchart here within the deaths within the online version. However, it’s always changing the flowchart. And I’d like to see the flowchart that’s a little bit more static.

So we want to get that concept down. You want to know what your particular flow is for your particular type of company. And then And then think about what forms are going to be used to to do that flow. So here we have the full flow chart. Now I’m going to go from the easiest thing to the most difficult thing because it will be dependent on the type of industry that you are in the easiest type of industry would be one that’s not even a cash basis, but once a step easier than a cash basis. And that’s one where you’re waiting till something clears the bank like gig work.

And then you’re just going to take that deposit and record it as revenue, meaning you’re waiting till the deposit happens over here. And when the deposit happens, you’re simply going to put it into the checking account and record the other side as revenue at that point in time. And that would only work if you’re in a type of system where you can basically wait until you get paid instead of having to invoice someone for example, or collect the payment say at a check register or a cash register or something like that.

And that instance, then you would be able to use the bank feeds most likely in that instance and basically wait till something clears the bank and record it as revenue at that point in time and you could probably make your system the most automated as any other kind of accounting system although if you do that, you will lose a little bit Have a detail, because the deposit form is not a form that QuickBooks uses to record revenue typically.

So when you look at this sub ledger, so a report that’s going to be breaking out the Sales by Customer, or the report that breaks the sales out by items that you sell, you’re not going to get as much detail if you use the deposit form to actually record revenue. If you’re on a cash basis, and you’re using more of a full like accounting process, you would be using the create sales receipt. So in this case, you would be on a cash basis, but you’re on in that cash basis, you’re actually going to record this this information, not by when it clears the bank. But when the transaction takes place.

And you can imagine anything with a check a cash register, like a like a restaurant, or a food truck, something or any, any thing that has a register there, you’re going to record the sale at the point in time that you do the work. And then you’re going to take that money, whether it be cash or whatever payments that you have received, and deposit them into the bank with a deposit.

And you’re typically going to need some undeposited funds, there’s this in between undeposited funds account that we’ll talk about that you’re usually going to have to use, because by the time it hits the bank account, you want it to be grouped in the same way that it will appear on the bank statement. And if you’re using credit cards, or if you’re getting multiple cash transactions, then you’re going to have to get that grouping together and deposited in the system. So it’s going to take a clearing account that we’ll talk about when we start to look at the forms.

So that would be the cash bases. And then if you’re on an accrual basis, and this would be dependent on the industry. So if you’re like a law firm or CPA firm, or any type of business where you have to actually do the work first and then build the client and then track the client that has not yet paid you, then you’re gonna have to create the invoice and now you’re on more of an accrual basis because the invoice will increase the accounts receivable and it will increase revenue at the point of time that the invoice is made. We’ll also talk about inventory and cost of goods sold later.

And we will record the deposit, we also might have one added step in that we might have to make an estimate. And this is usually happen if we have the type of business where we don’t have like a we have a custom product or service that we are making. So we have to make an estimate like a construction kind of system, you got to estimate what it’s going to be the estimate doesn’t actually record a financial transaction but can be used to then create the invoice

those are gonna be the major documents, the major flow documents that you will have. And then you also could have basically a refund or credits, that could happen. And those are hopefully going to be outside of the normal process if there’s some kind of problem with with the sale that took place.

Now these forms and this flow, you want to have a visualization of what this is going to do. Once you do then you get to a system in terms of how you’re going to do your data input and the normal day to day transactions, which you could do, of course, by just hitting the plus button up top, and you can choose the form that would be applicable. Or you can go into the center, which you can call the Expense Center, I’m sorry, the sales center or or the Get Paid center or the customer center.

So if I hit the plus item up top, here’s our invoice. So the invoice again, is an accrual type of document, it’s going to record the increase in accounts receivable, and the other side is going to go to some kind of revenue accounts, it will also have inventory involved. If you are tracking inventory in the system. And it’s a perpetual inventory system, then it will be decreasing the inventory, the other side going to cost of goods sold.

And you’ll also have sales tax involved if sales tax is involved. So it’s actually a fairly complex journal entry, which we’ll see shortly with the invoice and then the receive payment is the form that will be used. When we get paid from a customer. The estimate is the form that’s going to be used that doesn’t record a financial transaction, but it’ll be something before we make the invoice typically.

And then also of course, you could use the deposit over here which you will note they didn’t put in the customer area, even though hopefully the deposits are ultimately coming from the customers. But that deposit form is not something that QuickBooks wants to normally use as the form that’s gonna be recording revenue, what should happen is we get an invoice, then receive the payment or have a sales receipt and then record the deposits. Because that’ll that’ll help us to group the deposits.

But if you want to if you want to be on the most simple method, and you’re able to based on the industry, you could use the deposit form to record directly to the sales and if you have the bank feeds, that would be the easiest way to go. And, and we have some of the other less standard kind of forms that would be not part of the normal process, the refund receipt, the delay credits and the delayed charge.