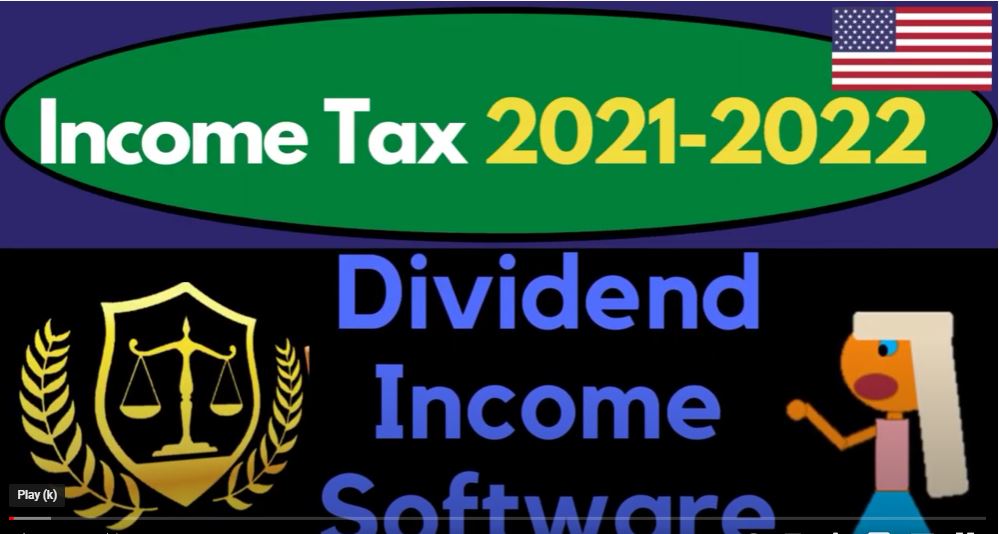 Income Tax 2021 2022 tax software dividend income and get ready to get refunds to the max and dive it into income tax 2021 2022. Here we are in our listserv tax software, you don’t need the lists or tax software or any software to follow along, but you might want to have access to the form 1040, which you can find on the IRS website irs.gov.

IRS dot govt the software helping us to run different scenarios putting the data input in and jumping on over to the forms including the form 1040. To see the results. Our starting point is going to be single filer, Adam Smith, living in Beverly Hills 90210. wages at the 100,000 starting point round number, we’ve got the 12 550 at the standard deduction, given us the taxable income at seven 450 I can mirror this in our Excel worksheet 100,000,

we got the standard deduction 12 550, we’ve got the taxable income at seven 450. Relying then on the software to calculate the tax which is going to be a key component here. As we think about the different calculations for the dividends, the 1515, I’m going to put that back on over here 15, that’s going to be our starting point. I’m going to go back on over and say Okay, let’s go to the first page, we’re talking about dividends now.

So typically, from your financial institution, for most people, the standard thing you’re gonna get is the 1099 div, which might not look exactly like this, but it’ll typically have the same it will have the same box is if it’s a 1099 div, usually we’re looking at box one A and one B as the primary two that we’ll be considering box one a basically being like the total dividends, and box one,

B being of the dividends in box, one a the ones that are going to be at a favorable rate, because they’re going to be qualified dividends. And that usually means they’re kind of their, you know, US corporations or something like that, generally. But so let’s go, let’s go back on over and say, Okay, well, let’s enter that into the system here and see what happens. I’m going to put this into the dividends.

So we’re going to say we’ve got some income, income line items for the dividends. And I’ll just going to call it core one or as financial institution, one, for example, ordinary dividends. Let’s just started off at 1000. And let’s see what would happen if I don’t say they’re qualified, all 1000.

And not none of them are, are qualified, therefore there would be something in box one a 1000, nothing in one B in that instance. So I’d go back on over and say, Okay, what happens, I could double check this and say, now I’ve got the 1000.

Here, we don’t have a Schedule D popping up, because they’re the threshold has not been hit in order to include this schedule D at this point, nothing in the qualified dividends, and my income goes up by the 1002 101, I can mirror that over here in my worksheet, and I could say, Okay, let’s go to the Schedule B, and let’s have our dividends and we had the 1000.

And here I could try to indicate whether they’re qualified or not or meet, maybe I don’t on my worksheet, because that’s going to be something that will change the tax calculation, which I’ll be dependent on the software for.

I’m going to depend on the software to calculate now, the 15,002 5515 152 55 is the tax now that that calculation should basically be the same as if I had any other kind of income or ordinary income. In other words, I should get the same tax calculation.

go back on over and say okay, let’s bring this back down to the 100,000. And then let’s go back to our dividends, dividends. And now let’s put the 1000 here, but say they’re all qualified now all the dividends are qualified.

So net now that would mean that we would see this in box, one A and one B. And so I’m going to go back on over what’s the difference?

Well, if I go back to the forms, and I go to page one, now we see that we’ve got the 1000 still here, but also the whole amount is also in the three a that doesn’t mean that we got 2000 of dividends, that means of the dividends we got all of them are qualified.

What was the benefit that took place? It took place because the when they applied the tax, they used the different tables, a different whole different progressive tax system to apply it out. And we saw the tables looking something like this.

And that’s kind of how I would explain it to the clients. Like if you were talking to someone about it, you can, you can kind of demonstrate it.

And that way and understand it in your mind, basically, in that way by running those two different scenarios and say,

Okay, what if, what if I had total dividends of this, and then of that amount 300, were qualified, that would mean that and this you would have box one a with a 1301 be added, I can go back on over and say,

eight. So again, you got a difference in the calculation due to the qualified dividends and the different rates with them.

Okay, now we’ve got to. And so there we have it here. And we also have the Schedule B that has now popped up because we have a significant amount of dollar amount. So if I go back on over, I can say,

Okay, now this is the same schedule, we reported the interest if it was over a certain dollar amount, so interest in dividends, kind of like your investment income, you could think about it as the 1000 and the 2000, adding up to the 3000, that’s pulling over to page one,

that is right here, and then the qualified portion on the left hand side. So now you’ve got your your 3000 being added the 103, the 103. You can imagine doing this in our worksheet over here, where we had the schedule be the 1000 and the 2000.

So we can imagine that situation. And then we could have the other other kind of items that you could see on this form. So for example, if there was something in the total capital gain distribution, let’s just take a look at that, for example, that’s in to a.

So if I go back on over, this isn’t really a dividend, but you might see it on the dividend form. That’s why you might take it into consideration here, let’s clear everything out and just record that so we can see it in and of itself, let’s call it let’s say this was a capital gain distribution of 1000. For example, you’re gonna say,

Okay, I see where to put that in on the tax software, this is where the tax software can be helpful. You can also see it down here, which gives you the line by line instructions to a total capital gain distribution.

instead, it went into the capital gain or loss, and they put it on the Schedule D. So if I was to open up the schedule D, if it was large enough to be applicable to the Schedule D,

then we’ve got the 1000 down here on the capital gain distributions. So when I’m trying to check that off, unlike my worksheet, if I have a long complicated return,

then I’m also going to be wanting I’m gonna have to, I want to be able to sort that out in my mind. So I’d add another schedule for the Schedule D and I add that in.

And I could have other stock sales and whatnot, which would be on typically the Schedule D, and flow it on over to the first page of the 1040.

So note your data input, should the software will help you with the data input, but then you want to kind of double check because the software isn’t there’s no double entry accounting system,

making sure that you don’t make an error by by inputting just data input the wrong number. So that’s why it’s helpful to do it, double check it in like a software example.

And also, then you can see what’s really happening when you do some of this data input, which you might not have so clear. In your mind, you got a similar scenario with with a lot of these other ones, the the 1250 game that comes up from time to time,

which would be on to be you could see here so you can take your software and stare at there’s the unreal cap 1250 gain, and then you can hopefully the software can help you out.

And you can kind of back into the rationale as to what is happening through the instructions on the form 1099 div and the tax software and so on. And again, you can have some other of these items here that you could have the withholdings that could be involved,

obviously that would be on the on the bottom of the tax return, and so on. So that’s going to be the general idea with the with the dividends.

It’s usually a straightforward data input. But you could have some questions in terms of how to explain it and what’s the impact in terms of taxes and so on, which can get kind of tricky. And you can kind of back into some of those answers oftentimes with the help of the software and the instructions.