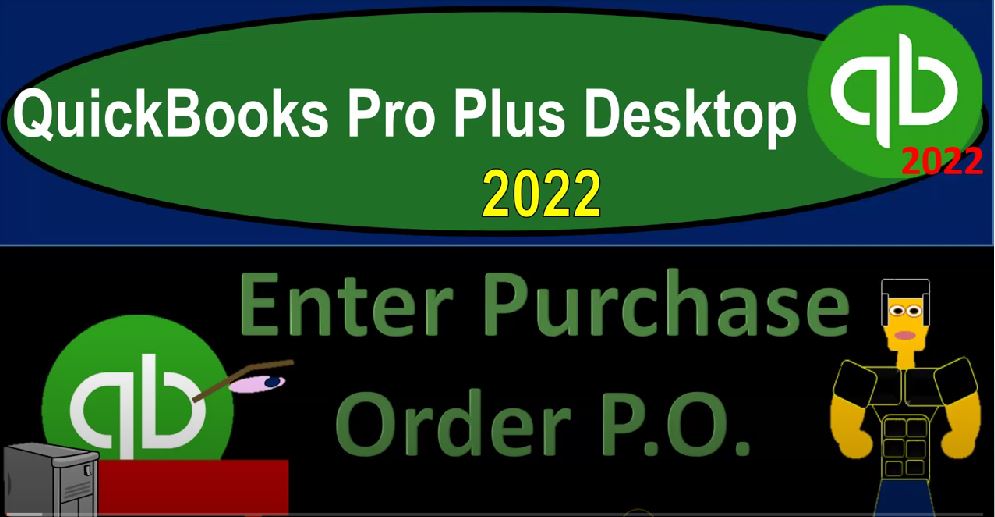 QuickBooks Pro Plus desktop 2022, enter purchase order or P OE form and get ready because we bookkeeping pros are moving up the hill top with QuickBooks Pro desktop 2022. And we are in our get great guitars practice file going through the setup process with a view drop down the open windows list on the left hand side company drop down homepage in the middle maximize on that homepage to the gray area, we’re now going to be looking at the purchase order we’re not going to be opening up the financial statements because the purchase order being unusual,

does not have a financial transaction related to it, it’s going to be a request for inventory that we’re going to be wanting to purchase, and then hopefully sell that inventory on down below in the customers area. No to that we also need to have the inventory online to see the purchase order in the homepage, which you can turn on by going to the Edit drop down to the preferences down below in items and inventory company preferences and have these inventory items turned on in order to see the purchase orders.

The purchase orders is not going to have a financial transaction due to the fact that we’re not actually purchasing anything with the purchase order at that point in time, we are in essence requesting the purchase, it’s a little bit different than what we might think we would be doing when we’re buying something online personally, for example, if we were to buy something from Amazon or something like that, we would typically then pay for it at the point in time that we request it.

So there’s going to be no financial transaction on that side as well. It’s a request for the inventory. But we do want to track it, because once we receive it, then we’re probably going to get the inventory we can we can imagine that being shipped to us with the inventory in it and a bill inside of it. And we’ll have to enter the bill at that point in time. That’s when we would record the inventory on our books and the bill, which would be into accounts payable, and then pay the bill in the normal kind of payment process.

So that’s what we’re going to be doing here we’re going to imagine we’re requesting the the inventory items. So we’re going to be going into our purchase order. And let’s take a look at one of our major vendors Epiphone, I’m going to minimize this caret to the to the left, I’m going to minimize the summary transactions on the right, so we can have a full screen here typing in Epiphone. So we have that vendor set up, that’s the one vendor we have set up, that’s our primary vendor we’re imagining that we buy guitars from and then we’re reselling those guitars that we had set up in the item list.

So the items are going to help us to populate this as well tabbing through, we’re then going to say that this happened on let’s say, Oh, 11222 Tab, Tab tab. This is populating from the vendor that we set up. So we have the information related to it from the vendor. This is our information to ship us ship it to us, Beverly Hills 90210 Right there. Anyways, we’re gonna go to the item down here, and we could select then our items, the items are coming from the items list that we set up.

There’s a number involved here, you would think there would be impact in the financial statements, but no, that’s what our estimated price is, as we request the inventory. If we see where these numbers are coming from, these are coming from our items. If I open up the caret on the left hand side, hit the lists drop down, go down to the items list. We had entered these items in basically the dollar amount that is going to be the cost. We’re looking at the cost, not the price.

So if I went to the ELT, for example, open it up, we got the $400 cost sales price is the 500 Were on the purchasing process here. Therefore we’re using the $400. On the cost side of things, the 500 will come into play when we sell it with a sales receipt or a a invoice. So there we have it, there’s our transaction. And note, we have one field here, the customer field, we’ll deal with that in a future purchase order. That would be if we’re purchasing it specifically for a customer.

That’s something that that Epiphone doesn’t need to know. But it’s an internal document that will allow us to track the purchase through the process, so we could track it through the billing, and then create the invoice so that when we get the inventory, we can turn around and sell it more quickly. Let’s go ahead and say Save and Close. And just check out what the next step would be, I’m going to close this item out, that would be we would be receiving it imagining we’re going to receive it, we won’t record this transaction, but I imagine that we’re going to get it and then Epiphone, we could pop that up, and then they say hey, there’s a purchase order related to it. And that’s the link that we would have for the purchase.

So I’m going to close this back out, close this back out the other way, we could, I’m not going to record it. The other way we could see this is we could go to the vendor drop down at the vendor center. If we go into the vendor center, and open this back up and look at the transactions related to Epiphone, we’re going to see our bill here. And if I go to next year here, because I’m looking at the future we’re playing, we’re doing this in the future, there is our purchase order, you can also go to the transactions. And you could take a look at your purchase order here.

And so let’s say we we buy three of those items. So we have three of the Gibson’s on stock. And so there is that, let’s say save it. And new, let’s go save and new on that one. And then the last one was the vendor of diamond, let’s say, Diamond Head, and it will say tab Quick Add. Not sure this is an actual vendor, but we’re going to add this one, this is going to be for the ukuleles. So this is going to be the d u c, Diamond Head ukulele. And let’s just say we get three of those as well.

So there we have those items. Next one we’ll do is we’ll switch it up a little bit. Imagining that we got we got a customer that came in requesting something. So I’m going to say Save and New again, Save and New. This one we’re going to say is Epiphone and so we’re going to imagine this happened, let’s say on the 13th. So we’re gonna imagine that we have the LPs, and we’re imagining a customer’s requesting 50 of them, and that we’re going to make a purchase order to Epiphone in particular for this particular customer.

That customer being Eric music, which I have already added, which you may not have added yet, so you can then add them by going to the new item here, I’m going to type in ERIC music, you could do a quick add, because we only need the basic information here. Although in practice, if it was a customer, you might want to get as much information you can related to them, then we could have multiple items. Let’s pick up another another type of Epiphone just to have a few line items on it. So we’re going to say 10. On this is also the ELP already have the ELP.

Let’s make a semi hollow body, let’s say 10 of those also, for Eric music we’re going to imagine, so when we process this, then it’s not going to record anything in the inventory, or it’s not going to record anything to any financial transaction, because we have not yet received it. But by giving the customer it will help us to link on through the process so that when we do receive this stuff, we can turn around to the sales side, creating an invoice so that we can then bill the customer on it.

So that’s the point of having the customer here, that customer field doesn’t make a difference, of course to the vendor to Epiphone. Epiphone doesn’t care about our customer, they don’t care who we are reselling the guitars to, they care about, you know, just making the sale to us. But this customer field is for our purposes for the internal purposes. Let’s go save and new and do it Another one. For this one, the vendor is going to be Gibson, we’re going to imagine, and we’re going to say that this is going to be on, let’s keep it with a 13. And we’ll tab on down.

So when we sell it, when we purchase it, it’s going to be increasing the inventory account as indicated down here, reorder point, I’m not going to put one amount on hand, we’re not going to use that anymore, because we’re not doing the beginning balances at this point in time. So when we purchase it, it’s going to go into inventory, when we sell it, it’s going to decrease the inventory account, record the other side to cost of goods sold and record sales of the 777. And then the other side go into accounts receivable, or cash or whatever whatever we got for the sale, whether it be accounts receivable undeposited, funds checking account.

Now as we start with a purchase order remember that the purchase order is unusual, and that every other kind of item that will be entered in every other form will typically have some impact on the financial statements, the balance sheet and the income statement, the purchase order being that unusual one, which does not. So we still want to track it. And we can track it by going you know, when we get the inventory.