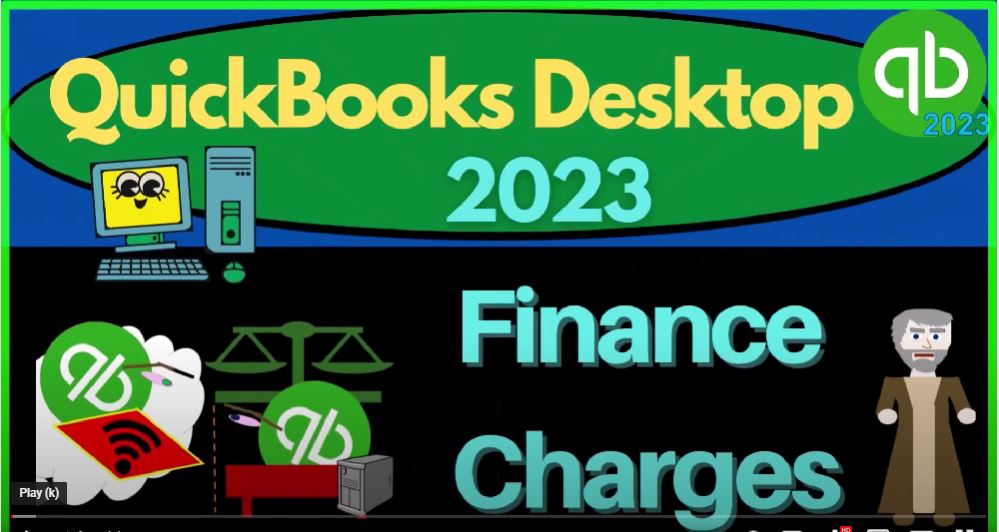 going through the setup process we do every time maximize on the home page, go into the view drop down open windows list on the left hand side reports drop down for the major financial statements company and financial first app being

Okay, one more time on the reports up top company and financial, bring it on down to the balance sheet, date 1230 124. Let’s say let’s customize the report up top and go to the fonts and numbers to change the font up to 12. Okay, yes, please.

Okay, that’s what we do every time going back to the home page and prior presentations we’ve been focusing in on the customer cycle,

which also can be called the sales cycle, the revenue cycle, the accounts receivable cycle, hopefully that cycle ending with an increase to the checking account for money we’re going to receive for goods and services we provided to the customers.

meaning for example, if you have outstanding items, outstanding accounts receivables at some point in time are you going to be charging basically interest for those receivables. Now typically,

when you’ve got outstanding accounts receivables, you’re not typically charging finance charges, because it’s not generally going to be a loan. But you might say, well, if they’ve gone past the due date, then maybe after that point in time, you start to enter or have the finance charges.

loaning people money, we didn’t really loan them money, we sold them goods and services for which they’re going to be paying us in the future.

we are in like a bookkeeper or landscaper or a lawyer will typically Bill someone and expect to be paid sometime after the bill has been sent within like 30 days, then we don’t charge like interest on it.

But of course, if we were simply to loan people money, then we’d have an outstanding loan to someone. And we would basically possibly be charged an interest in that kind of scenario.

So most businesses aren’t in the business of loaning people money, but they are in the business possibly, of having to track basically the accounts receivable items. Now one way you can determine if there’s outstanding balances is you could go to the Customer Center,

customer center up top Customer Center. And we could hit the drop down here and say we want to look at customers with open balances. And so there’s a quick list we can get to there, we might look at the the customers that have overdue invoices.

So we could say overdue amounts, there are none here, that’s one way you can kind of go through that process. I’m going to then the other way you could do it is by going to the reports up top and look at the customers and receivables.

And that gives you a quick look at those that might have these outstanding balances. Most everything in this company file is basically current. And so you would expect you wouldn’t be charging any sales charges on the current items.

So if you were going to turn if you’re going to have the finance items back to the homepage, this item here you got to turn them on in the Preferences clearly in the sample file they’re already on but if they were not, you could go to the Edit drop down,

preferences down at the bottom. We’re looking at finance charges on the left hand side. We’re going to the company preferences up top and then You can set your preferences. So it’s got the annual interest rate currently, at the 10%. This is what has been entered in the default sample file,

they’ve got the minimum five finance charge of $5. So in other words, if the if it was a little bit late or something like that, and there was a charge that is being charged, that’s less than $5, it’s not going to charge them for that unless it clears the minimum of $5. And then you’ve got the grace period.

So you might say, normally, we’re going to say, after the due date, so let’s say we create an invoice, they have 30 days to pay the invoice.

After the 30 days, you might say that you still want a grace period before you actually kick in the finance charges. Possibly, that’s a way that you can you can have a date, that’s not exactly the due date, or the invoice date. Right? You can, you could try to say we’re going to take it from the due date usually is what you would normally do,

because you’re usually gonna give them up until the due date without charging them finance charges, because that’s normal business practice, and then past that date, then the question is, do you want to extend it out past that date at all, before you start accusing the finance charges, so we’re going to keep it at zero here, finance account,

at some point, the accounts receivable that they’re going to pay us on, go into cash at some point, the other side is going to be some kind of income account, we haven’t go into other income here, we’re not in the business of finance charges.

So notice, we’re not putting it into like a normal income account. Up top, we’re gonna put it on the bottom, because this isn’t financing charges isn’t part of our normal kind of operations, because we’re not a bank.

But we have to charge them hopefully to try to incentivize people to pay us assess finance charges on overdue finance charges, and then the calculation charges based on the due date, that’s what you would typically expect because you give them that 30 days.

And if they don’t pay you in that timeframe, that’s when you would apply them or the invoice Bill date, that would be a little bit unusual.

But you could use that and then use your grace period up here to kind of work from there, Mark finance charges, invoices to be printed. So I’m going to keep that undone as the default. So I’m going to say okay, or just close this out has already been set up for us.

And let’s say they had an invoice that was was out there, as of, let’s say, Oh 905 to four. So I believe as of the date of this sample file, it’s running as of December. So that means it should be past due because we’re gonna give them the 30 Let’s say the terms are going to be 30 days. So it should have been due on 10 Five.

And now this software, the current date, according to the practice file is December I believe, December 15. So it’s past due. So we’re gonna say the item let’s just make up an item. Item I got item one here at 5000 was just keep that will keep that on the item.

So we’re charging them 5000. What would this invoice do? It’s going to Well, let’s let’s just make I think that item is just let’s just keep that I’m this invoice would increase the accounts receivable by 5000,

the other side would go to some kind of income account being driven by the item. So that’s be a normal kind of invoice, I’m going to save it and close it. You’ve changed terms for this, I’m going to say yeah, we’ll keep the terms. Let’s go to the Customer Center,

which you could go to here or up top drop down customer center there. And there’s customer number one. So there’s the $5,000 accounts receivable. So now let’s go back to the finance charges going to go to the homepage.

Now note, you could change this amount if you so choose. You could say well, maybe I’ll lower it for this one time or something like that.

But if you do so notice that next time if they still do not pay it, then it might take into consideration the prior finance charges that were not paid and then add on the next amount to it.

So just realize how it’s going to basically work if you adjust these This, this item for the first time, you can mark one or unmarked one mark all there’s only one that we have here. So mark the invoice to be printed, so we could mark it to be printed for an invoice.

And then you’ve got your settings down below here, and that’ll pull you basically up to the same settings we looked at in the edit area, if you go here, you can takes you to the same area that we saw in the settings up top,

this will be a report that will be generated that you could see from the report field as well. So if we assess the charges, let’s go ahead and assess them, what would we expect to be happening, we’re going to be increasing the receivable.

Now, for this particular customer, they’re going to owe us another 9726. And the other side is going to go to that income account that we we designated. So I’m going to say assess the charges. finance charges have I’ve already been assessed today, do you want to continue? Yes,

I do want to continue, I want to charge this person driving me crazy, you owe me $5,000. Dang it. So if I go down to the customer center again, for customer number one, there’s the 97 that has been charged. If I double click on it, you can see the finance charge activity that has now been charged on on the account. But 97,

I’m going to close this back out. And notice that you could, you know, inform you could run statements which we’ll talk about later to kind of combine

the balance due by running statements to provide outstanding invoices kind of grouped together that you can then give to the customer. So you might be saying well how, you know if I’m going to inform the customer of this now.

Now one way to do that is to look at the statements which we’ll take a look at in a future presentation, which can combine some of those outstanding balances. If I go then to the balance sheet in the income statement on the balance sheet, we see in the accounts receivable,

So it’s still income, but it’s down below in other income because this isn’t part of our normal operations. So if I double click on this, in that we don’t make all of our money through finance charges. That’s not what we do as a business. We’re not a bank, right?

So this is something that isn’t shouldn’t be repetitive. It just happens to be the case that we had to put the finance charges in case in this instance would be the idea of

why you put it down here and not part of our normal operating income from the income sources that we generally do and want to to to make our income in the future. So that’s the general idea of the finance charges.