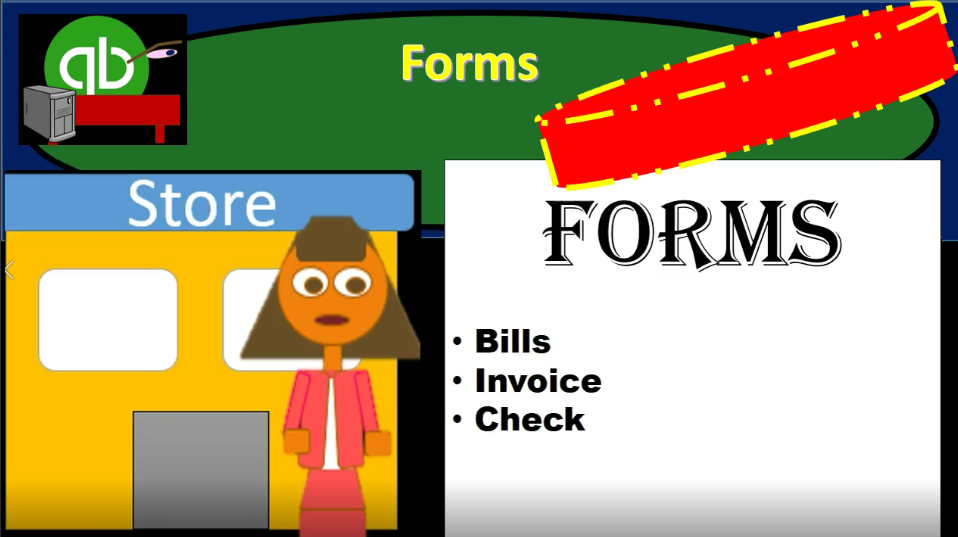 We have the Home tab open in order to open the home page, you would go to the company drop down and the homepage. Now we want to talk a little bit more about the term of form. Within QuickBooks. We’ve discussed this a bit as we’ve gone through the vendors Center and the customer centered the flows of the activity, we want to emphasize it more here because it’s really important to understand the terminology that you’ll be using. Because when you talk to different people, they’re going to be thinking about different kind of terminology.

And even within the field of accounting, it will change. For example, if you’re talking about an accountant, that’s business learning, accounting theory, they’re learning in terms of debits and credits, and not so much through the data input forms. So when we as an accountant, as a bookkeeper talk to someone who’s mainly focusing in on financial transactions being recorded, which could include people like auditors, then we need to be we need to understand that the different types of terminology that we will be talking about. 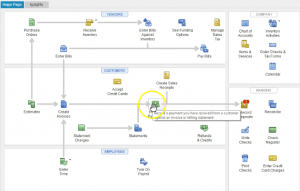 So the term form, in this case, then when we think about QuickBooks will mean these data input screens, so things like bills, things like the pay bills, which will in essence be checks, the create the invoice, the receive payment, the Create sales receipt, these for QuickBooks, or the forms now and you know, if I was not in QuickBooks, and other accountants might see these screens as basically data input screens or something like that, QuickBooks will typically call these forms.

So it’s important to understand that difference when you’re talking to other people, and have the have the term of form when you talk to other people. If you talk about forms, to somebody that’s not formally used to QuickBooks, then the term form may be confusing to them, you’re basically thinking, Well, no, these are the data input screens to them, right. And if you’re talking to someone that’s proficient in QuickBooks, or if they are talking to you, and they use the term form, then you’re going to want to basically be able to understand what where they’re going to.

So these types of terminology thing, when you just work with the software in and of itself, it doesn’t seem like a big deal, because you just you can call it whatever you want. I’m doing my own bookkeeping thing. And I used by using this thing, eating in here, right, or whatever. But when you when you go to get advice, when you go to look at the help views for QuickBooks, when you try to get information on something that went wrong, when you communicate to other people, it’s useful to communicate the language.

If you work with clients, or other employees, it’s useful to tell them hey, this is what the language is of QuickBooks and actually speak in that language. So when you start working with QuickBooks, note that you’re going to have to learn a few different languages, you’re gonna have to learn accounting language in general, because it uses different types of terminology.

And then you’re going to have to learn QuickBooks language. And QuickBooks deals with different types of formats of things and different kind of language as well. And then you’ll be able to talk whatever language people are in at the auditor comes in and speaks, you know, formal accounting language but doesn’t know QuickBooks language, then you can basically be the interpreter there. If on the other hand, you’re talking to someone that speaks QuickBooks language, and doesn’t know you know, the accounting term and can’t communicate with the auditor or something like that you could speak in those terms, or the tax preparer at the end of the year, possibly, same kind of thing, everybody’s going to have similar terms in terms of accounting, but they could differ even within that field, depending on the software that we’re using, and those kind of things.

So you’ll recall, then, all of these data input forms, then are things that are going to be driving for QuickBooks financial transactions, the main two financial statements on the balance sheet and the profit and loss statement. So if I was to select the reports, drop down, go to company and financial and go down to the balance sheet, then this is our major financial statement. If we change the dates up top in the customized reports from a 1120 to 1230 120, 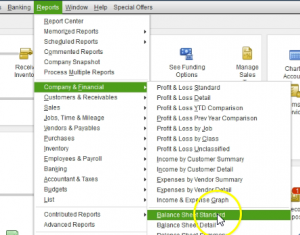 January through December 2020, then the these accounts will then typically be affected by the forms. So what you want to think of is every time you create a form, on the homepage, how will it affect then the balance sheet, the other major form the profit and loss, also also known as the income statement, which will basically be what it is called in financial accounting. So again, if you speak to an auditor that’s not really familiar with QuickBooks specifically, they will typically call it an income statement. 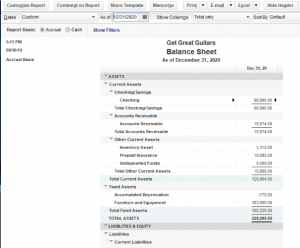 And you’re gonna have to say well, that QuickBooks calls that a profit and loss statement, reports drop down, we’re going to go to the company and financial the profit and loss the other financial statement type form, the main type of form that we will be using all the time, oh, 10120 to 1230 120, January through December 2020. Again, every time you make a form, you want to think about how it may affect the profit and loss report and the balance sheet type of report. 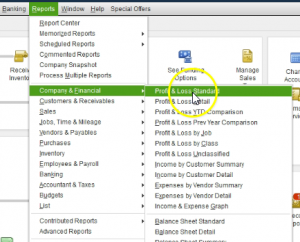 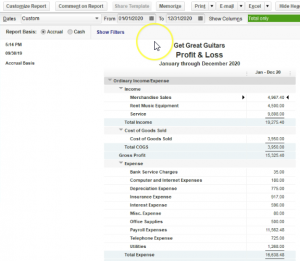 These are the driving forms within QuickBooks when you see these data input screens, and these are the things that are going to be driving the data input within QuickBooks when within the financial statements. When you go to the financial statements, let’s take a look at the trial balance. And you you take a look at these forms, you could see this double clicking on the say the checking account, the form type, now you’re going to have different form types here on the left, like you got the check. 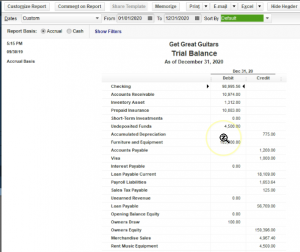 But the bottom is a little bit different than a normal check because it’s coming out of accounts payable, closing this back out closing this back out. So going back to the homepage. So our practice as we started go in input data into our couple months of data is not just to enter the data input into the forums, it’s to learn the terminology of the forums to be able to communicate what a form is to other types of people, or be able to interpret other people’s communications with with us when they’re talking about financial transactions, or possibly debits or credits or the effect on the balance sheet and the income statement.

We also want to think about you know, in order to do that, we need to be able to think about what each of these forms will do way beyond the data input. What’s it going to do to the financial statements? What are the accounts going to be affected? And we also need to think about how can we set up these forms for anything that’s going to be needed in order to fill them out as easily as possible, for example, and most importantly, with regards to the creation of an invoice and the creation of a sales receipt, in which case we’re going to need the items to be set up to set those up. Well, we’ll think think about that when we start a new company and of course the employee information how some detail and setting up the employee information