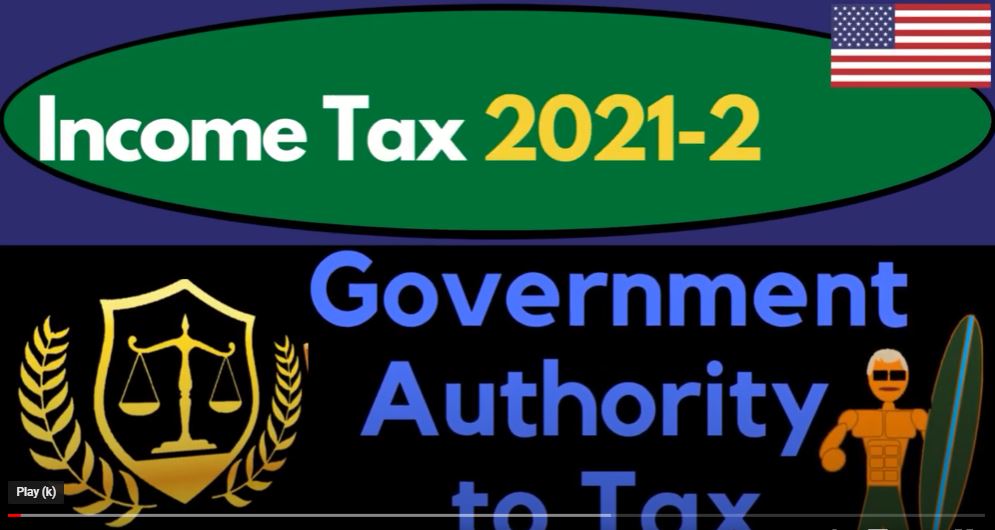 Income Tax 2021 2022 government authority to tax, get ready to get refunds to the max, dive in into income tax 2021 2022. If you work in the field of taxation, you will almost certainly be asked by a client at some point in time. Or you might ask yourself, Where does the government get the authority to tax a natural question in the United States,

a place where we were historically quite skeptical of taxation tried to avoid the taxes for as long as possible. And you might hear arguments saying that the tax itself is against basically natural law theory.

So you might want to have handy in that event, basically, it’s going to be the 16th Amendment to the Constitution. That’s just a response if you need to respond to that if you’re in,

So the 16th Amendment to the Constitution passed in 1913, The Congress shall have power to lay and collect taxes on income from whatever source derived without apportionment among the several States and without regard to any census or enumeration.

So obviously, in the United States, there’s a lot of skepticism, we’ve all heard the saying that there’s no taxation, without representation as kind of one of the causes of the revolution in the first place.

Obviously, the second part of that is going to be important, without representation. But even still, there was a lot of skepticism, especially on the federal level, to have the federal taxes.

And when did the federal taxes really come into play, to pay off basically defense, that’s where the federal taxes, the main thought, or the originating thought of what the federal government was supposed to do, was to have the national defense. And that’s when the taxes would would grow up.

And that’s why you need that combined military because the separate militaries of the states weren’t really sufficient to mount a national defense in the need of the national defense. So on the national level, in order to comply with the ideals of the Constitution, which is basically grounded in the natural law, theory, life, liberty,

the pursuit of happiness, or property, as it wasn’t like kind of natural law, those were the components of it, then the federal government is in alignment with that,

because they’re going to be protecting our security on the on the federal side with the national defense. And that’s what the money should mainly be going towards. So they can they can basically do that. So that was the original thought. On the state and local level.

You have kind of a similar idea that you pay taxes on the state and local level, to support your your natural law rights. And in that case, obviously, defense in that format would be the police so that people can protect, you know, people’s well being and their property to pursue happiness.