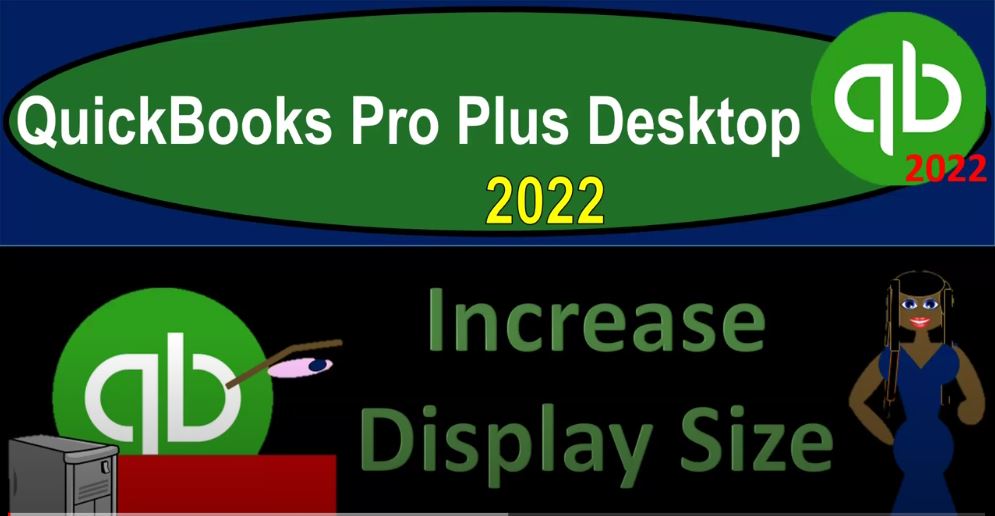 QuickBooks Pro Plus desktop 2020. To increase display size, get ready because we bookkeeping pros are moving up the hill top with QuickBooks Pro desktop 2022. In prior presentations we got the QuickBooks software up and running on the computer indicated by the fact that we have this icon represented the shortcut to the software double clicking on that icon being the most common way to open up the software. If you don’t have that information on the computer, take a look at the prior presentations.

Before we go too much further, we want to think about what the display is going to look like when we open up to the QuickBooks software. So for example, if I open up the software, you might have the display that you’re looking at be a little bit larger or a little bit smaller in terms of the text. Now if you were on a web based software, if you’ve used QuickBooks Online, for example, by the way, it’s going to open up and show what what does create a new company file require, and so on and so forth, we’ll start the new company file in a future presentation, we won’t do that quite yet.

I’m going to close this out. And then that’ll take us to our typical kind of opening the company file page, if you have a prior company file open in the past, it will most likely try to open to that company file. If not, then it will open to this page, which will typically show the most recent company files here. And then you can also search and open or create a new company file which again, we’ll do in future presentations. Now if you look at simply this page, you might be saying this icon in the middle looks greater, larger or smaller on your screen than the screen.

In other words, here’s my display settings. If I go to 100, which is the recommended setting the setting your computer will be on by default, the icons to me are fairly small. And if I look at the reports that the lettering of the reports are smaller than I would otherwise, like them, I could adjust the lettering on those reports. We’ll talk about those later. But I prefer to have it and have usually been running it at the 125%. Just in general, that’ll increase the size of everything. In essence on my computer that’s better on my eyes, my eyes are not the best of eyes.

And I also think it’s better for you as we record the recordings. And I’m going to try at this point to increase it to 150, which I think will be clearer with the recording. So we could see the recordings a little bit easier. So I’m actually going to go up above what I would normally run it at. And so that’ll make it look a little distorted. If you’re running your site at 100, you might be saying hey, the icons are quite small, the layout will be the same unlike a web based program where they actually might adjust the layout of the icons, they’ll probably be less adjusting, although they might still adjust like the ribbon on the top of the screen. But it might be a little bit smaller.

And that might frustrate you, you might be saying hey, I’d like my I’d like my icons to be bigger like those icons. And typically that’s going to be found here, which is actually the settings on your computer. They can also be found by going into the QuickBooks program settings and then finding it there, we’ll look at that. But those settings will typically be then taking you here to your display settings on your computer. This will then change the settings not just within QuickBooks however, but your normal kind of settings do so when you do make this adjustment.

If you’re working in QuickBooks a lot, and you’d like to have a little bit larger settings in QuickBooks, then you can change the settings. If you don’t like those larger settings when you’re not working in QuickBooks, then you would have to kind of toggle back and forth basically between adjusting this for QuickBooks and outside. So I want to point that out first, so that when I when we do go into QuickBooks, you realize that I’m zoomed in quite a bit here. If that’s beneficial for you, you can zoom in that way as well. And if not, you kind of see where where that difference will will be. So next time we’ll go into basically adding a new company file and getting in to the data