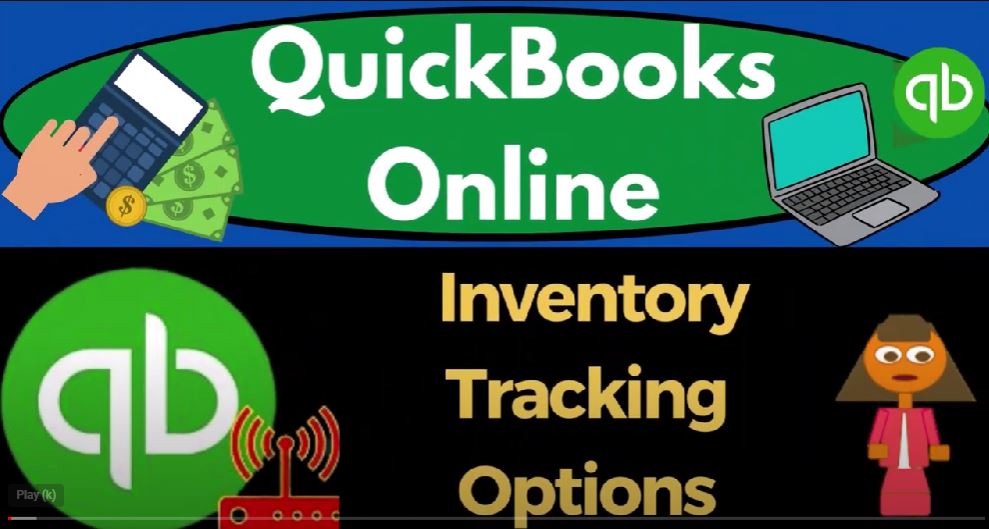 we started up in a prior presentation using the 30 day free trial, we also have open the free QuickBooks Online test drive a sample company. If you want these two things open at the same time,

I suggest opening the sample company in an incognito window or in another browser. If using Google Chrome, you can go to the three dots in the browser,

open the new incognito window type in QuickBooks Online test drive, we will be using the test drive to compare and contrast the accountant view, which is what the get great guitars is in which you can see on the left hand side and the Business View,

Which is what our sample company is in, you can toggle back and forth between those two views by selecting the cog drop down, and then switch the views on down below. In prior presentations, we set up the company file, we looked at some of the preferences in the cog up top, we took a look at our general ledger.

Now we’re going to be entering the inventory items, which have another level of complexity, because they’re gonna have the units of inventory, as well as the cost of inventory. That will then come out to the total here of the inventory assets at the beginning balance. Now note that as we do that, we should get this number as the end result.

And the other side, because it’s a double entry accounting system might be reported to the to the opening balance equity account. And we also want to think about the form that might be used to do that, I think they’re going to use kind of like an adjustment form.

So an inventory adjustment type of form in order to record that transactions. And if we do that for all the accounts, then we should remain in balance. That’s the next step.

Now before we enter the inventory, I first want to just go over the different ways that we might be tracking inventory in the system, because a lot of times people see that they have inventory,

and they say, Okay, I have to do things the same way, I’ve got to use all the functionality of inventory tracking within the QuickBooks system, that’s not necessarily the case,

QuickBooks has the capacity to track the units of inventory. But you might well have a system or the type of business where you don’t need to do that. And you might track it in some other way. And that would be perfectly fine.

So I just want to look at the different methods for tracking inventory. So I’m gonna go to the flowchart over here. This is the flowchart on the desktop version.

But I think it’s just a nice flowchart, the forms are generally the same, and the online version just to think about inventory in general, and what type of tracking we have to do when we deal with inventory.

Now, obviously, it will depend on the type of business you are in as to whether or not you have to deal with inventory or not, if you’re in a service business, if you’re a bookkeeper, a law firm or something like that, you don’t have much inventory other than possibly paperwork.

which would be more complex than, say gig work that has inventory that has no inventory, possibly, if you if you’re just getting paid by YouTube, for example.

The fact that we put inventory on the books as an asset instead of just expensing it when we purchase it is an accrual thing. It’s a deviation from a cash based system.

So if for example, we’re in a kind of system where we’re buying supplies, specifically for a job cost system for a specialized job, if that’s and so we don’t have a lot of inventory on hand than at any given time, which is buying the inventory as we complete the job.

And then we’re going to invoice the client at the end of the job. And that case, you might be able to stay on a system where when you buy the inventory with a check form, or an expense form or a bill form, then you just expense it to cost of goods sold,

On an accrual perspective, you would like the sales to be there, at the same time that you that you expense it.

And also, for your business purposes, you want to generally the accrual method is the preferred method, typically, when you have inventory. So now when you buy the inventory with a bill form, or a check form,

So in that case, you for example, every time you buy the inventory with a bill form, or a check form or an expense form, you just increase the inventory account. But you’re only increasing the dollar amount of the accounts there. And you’re tracking the units of inventory, possibly on an Excel spreadsheet,

So that that system actually works quite well. And then you don’t have to track the inventory within QuickBooks,

So now when you buy the inventory, you might have a purchase order and then a bill or you might buy it with a check or an expense form.

Every time you make a sale. That means you have to use an invoice or sales receipt. You can’t just use a deposit to record sales. as it doesn’t have the same capacity to decrease inventory and track the inventory.

So we’ve got to use one of these two forms, and then it will automatically decrease not only the inventory amount in dollars,

weekly, or monthly to see if our inventory in the system ties out to what is in reality, it should. But it doesn’t oftentimes in reality due to shrinkage, spoilage, theft, and that kind of stuff. So those are the general methods. Now we are, of course going to use the full service inventory method.

And we’re going to start off by putting our beginning inventory into the system. So if I go back to the QuickBooks file here,

and the way we’re going to do that, if we go down to the sales tab on the left hand side, which if you’re in the business view, is under the bookkeeping, tab. And then we’re I’m sorry, it’s not in the it’s in the get paid and pay tab, and the products and services.

That’s where it is under the Business View. And then under the accounting view, it’s under the sales, and then products and services. This is where we were last time when we entered our service items.

And you can see it’s got a bit more complex of a structure, there’s more fields that we have to be filling out than if I was to look at the comparative service item here, which has less fields because we don’t need to deal with the tracking of the inventory units, or the inventory account or the cost of goods sold account.

So we match this number in our beginning balances, it should put the the units of inventory in the sub ledger number two, as well. And then the other side of the balance should go to some kind of equity account. And so we’ll see that next time, it’ll be great.

And then if I hit the plus button, and I go to my invoice, we will then be able to populate the invoice. Now just realize also maybe I should first look on the inventory, what will happen is we’ll have a purchase order that might deal with the inventory when we buy the inventory.

So if I go into an invoice, for example, then we’ve got our product information down here, it’ll should populate down here. So we can imagine then, if we’re in a store situation,

and someone just brought up a piece of inventory, we should be able to find it in the drop down nice and easily. And the invoice will then recreate a fairly complex transaction. And that’s the point.

So the difference between this will go to Sales Tax Payable, it will also decrease the inventory account and record the cost of goods sold account.

a lot going on the data input, however, because we set it up properly, setting up the GL accounts, the sales tax accounts and the items. It should be pretty easy to do the data input. So that’s what we’ll do next time.