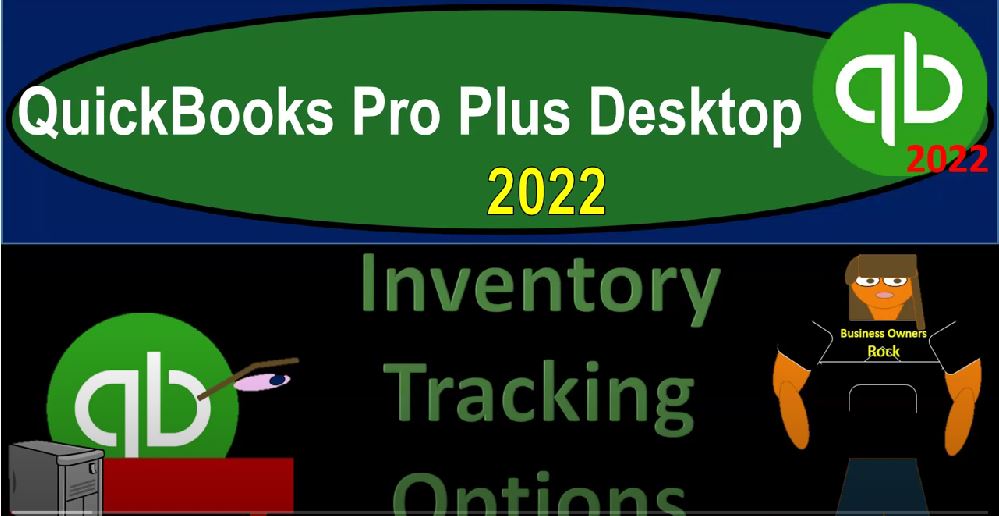 QuickBooks Pro Plus desktop 2022 inventory tracking options Get ready because we bookkeeping pros are moving up the hilltop with QuickBooks Pro desktop 2022. Here we are in our get great guitars practice file going through the setup process with a view drop down the open windows list on the left hand side company drop down homepage in the middle maximize that homepage to the gray area and prior presentations, we look at service items representing services we provide using them to populate our invoices and sales receipts.

Why does inventory do that? And for an example, we can kind of compare it to like property, plant and equipment. If you’re on a cash basis system, even if you paid like if you paid $100,000, for a building for the business, even though you paid cash for it, you wouldn’t be expensing the $100,000 building, most likely, even if on a cash basis, you would do an accrual kind of thing, putting that building on the books as an asset, because it’s going to be impacting multiple periods out into the future,

then allocating the cost of that building in the form of depreciation to the periods in which it’s used in order to generate revenue. That’s an accrual concept. And even if we’re on a cash basis, we can’t really avoid that when we purchase something that’s so drastically, you know, different in terms of when we pay for it versus when we’re getting the benefit from the asset, like a building. Inventory is a similar thing. If we buy inventory, generally, we’re going to do an accrual thing, which is to put it on the books as an asset inventory.

And then we’re going to expense it when we use the income, inventory consume it. In other words, in order to generate revenue that’s at the point of sale, that would be kind of a perpetual kind of inventory system, or our general inventory type of concept. That’s an accrual kind of concept. So the first thing you might think of what if my inventory purchase and sales are very close together? Do I really have to go from a cash basis to an accrual kind of basis, that’s the easiest method you can think of, and we’ll go from easiest to most complex would be to say,

And the turnaround time is very short, then maybe even if you sell inventory, you could get away with a method that would be a cash basis method. You also have to be careful for taxes too, because tax code has some kind of rules with relation to cash basis accrual basis, if you have inventory involved, but in any case, that would be the easiest thing to do. So what you would do there is you would just be saying, Okay, I don’t hold on to a lot of inventory. Even though I sell inventory, when I purchase the inventory, I’m just going to basically expense it at the point in time that I purchase it. So therefore when I make a bill to buy the inventory,

or I write a check to buy the inventory, instead of putting it on the books as an asset. And using the inventory tracking within QuickBooks to track the inventory is in essence just going to expense it at that point in time possibly straight to cost of goods sold, which is usually what we hit when we sell the inventory. And then when I actually make the sale using an invoice or a sales receipt, I will not enter an inventory item transaction but possibly a non inventory or service type of item, which will do the same kind of entry as a service item, simply recording an increase to the sales the other side then going to to to the accounts receivable or to increase in cash or undeposited funds.

And then you might have to include the sales tax in that transaction if you are subject to sales tax, which you’re more likely to be when selling the inventory. So that way, you don’t have to track the inventory. That might work if you don’t have a lot of inventory, but for most people that need to track the inventory, then you’re going to have to move to an accrual type of system. So the next step up and kind of simplicity would be what if I don’t want to track it in the QuickBooks system? because if I do it there, I have to use a perpetual what we call a perpetual inventory system, meaning inventory is going to be adjusted every time we enter a transaction, which is great.

But it takes more time to do that in the setup process. So we might say, hey, look, I’m just going to track my inventory manually, myself on like an Excel worksheet or something like that and make periodic adjustments to the inventory in QuickBooks, that would be a periodic type of system. So you might, you might do something like this, to see the difference between the two here is going to be basically a periodic system versus a perpetual system.

So most of the time, when we think of inventory, we think of kind of like a perpetual system. This is a FIFO system, the inventory in the desktop system usually uses an weighted average. But you know, the same kind of concept, those are flow assumptions, I won’t get into a lot of detail with that now. But the idea then being if you have a perpetual system, let’s say we go through this problem very quickly, let’s, let’s say we start off with 100 units at 50 $50. For 5000, that would be the original amount on the balance sheet. And then we purchase another 400 units at $55.

They cost more now. So now we got the original 150 plus two 455, for a total of 27,000 for the two layers using a FIFO method. Now the key is next time when we sold when we sell the units, we’re going to say that we’re going to sell it and we’re going to record the cost of goods sold at the point of sale, we can imagine this happens when we create an invoice, we’re going to say we sold 400 units. So 400 units here is going to be which units did we sell, we sold the original 100 that were at the 50. And then we sold the rest the 320 of the $55 units wiping out this first column that goes down to this first row. So we no longer have any more units at $50.

And we’ve got 80 left at the at the 55, which is the 400 minus the 320. Now I’m not trying to get into the FIFO versus average right here too much what I’m trying to represent is the fact that this would happen on a perpetual basis, as we enter each transaction, if we were using the QuickBooks system.

probably you probably want to count it, you know fairly quick fairly regularly however, and then you will determine based on the physical count how many of you have sold, and then you’ll make an adjustment on a periodic basis, which will be adjusting the cost of goods sold. And the inventory on a periodic basis. This periodic kind of system might be easier for some types of company, you might say, hey, look, I’m not going to enter all this information into QuickBooks, I’m going to use my own kind of method to basically enter the inventory into the system on a periodic basis. And then I’ll enter adjustments into QuickBooks.

And then on a periodic basis, possibly at the end of the night, then or the at the end of the week, or at the end of the month, or whatever you are going to be counting the physical units you have, and then see how many units are left and you can kind of figure out then the units that were sold. And then you can come up with an adjusting entry on a periodic system, and just simply enter that adjustment into your QuickBooks system, which could be like a journal entry or something like that, which would simply be lowering the inventory, the other side then be going to the cost of goods sold.

But if I want the system to track the units, I have to go to the items tab, and then enter an inventory item. That way, it’ll increase not only the dollar amount, it’ll also track the inventory units. Once I’m tracking the inventory units, then when I make a sale using a sales receipt, or an invoice or sales receipt, then the system will know what the cost is. So when I enter save the item here, it’s going to give me both the sales price as well as the cost and track that cost.

So this will record not only the sales side of things, which will be visible on the invoice, which will be increasing accounts receivable, the other side going to revenue, and then sales tax being affected, if applicable. But it will also drive the other side, the perpetual tracking of the inventory, decreasing the inventory account, decreasing the units be tracking the units as well and recorded the related cost of goods sold. That stuff happening using this form, even though it’s not on this form.

And you can think of that as a as similar to when you scan something like at a grocery store, then obviously the scan price is shown we know what that is. But that system of scanning is also recording the other side of the transaction decreasing on a perpetual basis, the inventory and units recording the decrease in inventory and dollars recording the cost of goods sold, that system is more difficult to set up. But once set up, then it’s going to be easier, it’s going to be nice that we have this perpetual system that’s going to be recorded when we sell, it will also be easier for us to calculate things like stolen items or shrinkage, whatever you call it or spoilage or something like that.

Whereas when we have a periodic system, and we’re using a physical count, then we then we’re dependent on the physical count, what we would like to do is basically kind of match up our perpetual system to a physical count. And that can give us a bit more of an internal control over things like stolen items or spoilage or something like that. So that those are the systems that you can you can use, we of course are going to enter the inventory into the system.

The system here QuickBooks Desktop will typically be using not at first in first out, but rather a weighted average system. That’s kind of a default. If you were to level up on your on the quick from QuickBooks Pro, and pay more than you have more inventory types of options that you can be adding in oftentimes if you have a more complex inventory system, that’s one of the things that if you want to track that in QuickBooks,

that’s one of the things that requires people to kind of level up and pilot and possibly purchase at a higher a higher level of the subscription to get access to that but we’ll be entering it here with the QuickBooks Pro Plus and therefore using a perpetual inventory system and a weighted average system.