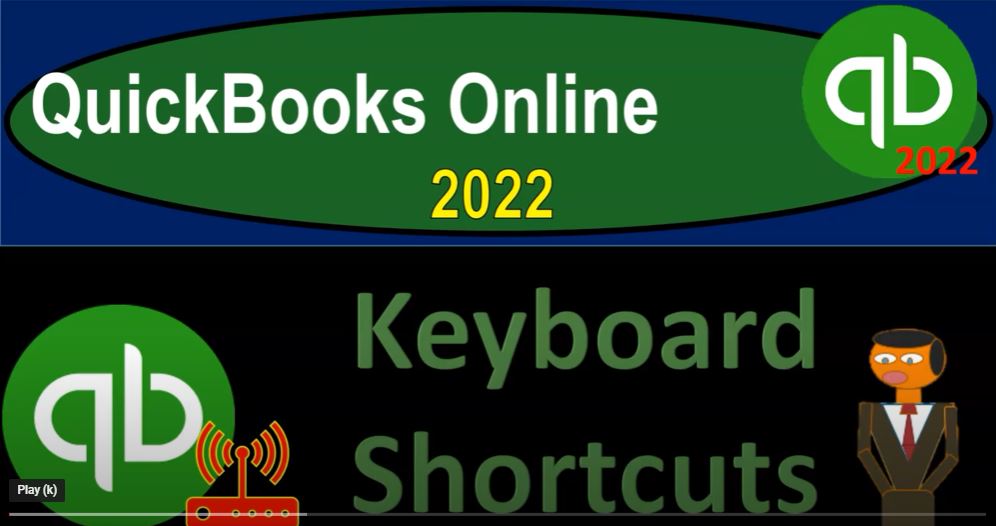 We also have the 30 day free test drive version open, just so we can look at that business view. If you don’t have access to this at this point in time. That’s okay, we’ll work on it more in the second half of the course, back to Craig’s design and landscaping services, we want to take a quick look at keyboard shortcuts,

I have to admit, as a QuickBooks geek, I’m not as good as I could be with the keyboard shortcuts, but we will give you a list of the shortcuts and you can kind of test them out on your own to see which ones of the shortcuts you think are actually saving you time. So we’ll give you a link to this one drive at some point in time. And you could go through and test out these shortcuts for yourself.

I’m doing more electronic transfers these days. And then I might be using the expense form. And if I’m manually entering those, I usually go into the register. So I don’t find that quite as useful to me. But you have the right checks, you have the expense form, which was the the Ctrl, Alt x, and then the receive payments form. So that would be obviously if you had an invoice and then you’re receiving the payment on it, then you could go to the shortcut to receive the payment.

To me, again, if I was using the receive payment form, I would usually possibly be in the Customer Center, looking up the invoices that I’m receiving the payments on. So I don’t find that quite as useful of a shortcut to me generally, but maybe you might, the estimates, I think could be useful depending on your industry. Because if you’re in an industry where people are calling you up all the time, and you’re creating an estimate for them in some way shape or forum, then I would think the estimate could be a good shortcut.

Depending on the industry, you’re in CTRL, ALT E, and then Ctrl, Alt L for the lists. So if you’re working on the lists, a lot product lists and so on products and services, for example, a type of lists, noting that lists is kind of a special terminology. In QuickBooks, we’ll talk more about lists later Ctrl Alt A the accounts, which could be a useful tool, I’m assuming accounts means the general ledger accounts, and then Ctrl, Alt C for the customers,

I think that could be a nice thing to go to, if that takes you directly into the Customer Center, control all vt v for the vendors taking you into the vendor center, that could be a useful tool Ctrl, Alt F search transactions and Ctrl Alt H for the help. And then we have the on transactions page. So if you’re in an invoice or in an expense form, for example, you’re in an actual form, then you can hit Ctrl, Alt D to save it and close Ctrl Alt S to Save and New these two meet. I mean, they could save you some time.

But it seems like clicking the button at the bottom of the form, even if it has a drop up isn’t too much of a time can inconvenience to me. So they’re not something I’ve really learned. But I mean, if you’re doing this all the time, then that could save you time. And then CTRL ALT M Save and Send and then CTRL ALT X exit the transaction Control Alt cancel with or see what they cancel.

This is a useful tool down here that I use sometimes and then I go in and out of using it because I got the I’ve got the calculator on my keyboard now. So I can always just kind of pull up a calculator like this. So I tend to do that automatically, when I whenever I need to calculate something but and many of the fields you can actually calculate within the field in the form that can actually save a lot of time.

The reason I don’t use it all the time, is because some fields don’t have it, it seems like so, like I have to kind of just know that this field has that calculation feature and some other ones don’t. And to me, I’m just automatically just hit this calculator button. And the calculator always works.

It always will pretty much always sometimes I don’t want to jinx it or anything but in case you got the date shortcuts, so the date would be t if you wanted the year you could sort of type in here you can type in y and then are the month and then age the week W and then the k and then the zoom features what we’ve been looking at you can hold Ctrl and scroll up and or hit the plus and minus button. So let’s just take a look at a couple of them.

I would think the invoice form could be useful so Ctrl Alt I So if I go back in here and we hit Ctrl, Alt and I, then we should be able to pull up an invoice form automatically populating the invoice form. Again, if I was going to going to populate some of these other forms, like a write check, I would usually do that in the registers that might not be as useful to me. If the receive payment,

I would usually be going in here in the sales area, and then be going to my customers, in my opinion, oftentimes, when I’m receiving the payment and looking for the open invoices that I’m going to then receive the payment on. So I would think that would be the faster for a lot of people because then you’re actually finding the customer, you’re going to receive payment, but it might be useful.

The estimate CTRL, ALT E. So if someone calls up and you’re doing constantly estimates for people over the phone for some custom jobs or something like that, or what what something would cost, we could say Ctrl, Alt E on the keyboard, and pull up the estimate, I think that could be a pretty fast thing. But again, hit the plus button and go down to the estimate that too, you know, doesn’t seem like that would take that long to me there. So then if I go back down, we got the lists Ctrl, Alt L Ctrl, Alt L for the lists.

And so these are the different kinds of lists, that would take a little bit longer, because that’s up up here. So if you’re going into these lists all the time, and we’ll talk more about these lists, at a later point, these are like the ground basis behind the scenes kind of stuff that needs to be set up. So that could be useful. Ctrl, Alt A for the accounts Ctrl, Alt A. So now we’ve got a chart of accounts, that might be a little bit faster.

But again, that’s pretty quick down here, if you’re in the chart of accounts, you hit the accounting thing. So it doesn’t seem like it saves lat much time Ctrl, Alt C for the customers, so Ctrl, Alt, C for the customers, that could save you a bit of time, I would think because you got to you got to go a little bit further there. If I was, if I was on the dashboard, I got to go to the sales, and then go to the Customers tab.

So obviously, if I’m in an invoice, and I wanted to basically use one of these items, notice I have to hit the drop down to have Save and New save and close and save and share or Save and Send if I want to pick one of those and use it all the time might be a little bit easier to have a shortcut on that.

So that will be those exit transaction cancel, here’s my number field. So if I was to go into here, and say I wanted to like multiply something out, for example, in a field. So if I wanted the rate, like two times 10 or 20, something like that, and I say tab, it’ll calculate it. So if I said like at times five, and then tab, it does the calculation, that’s really nice. And that can actually save a lot of time.

The thing is, again, some fields don’t have that. So they’re getting better and better at having all the calculation fields have that. But if sometimes the field doesn’t have that, to me, I’m just like, there’s my calculator with a little button on my keyboard. And I calculate it there pretty quickly.

So it might say it could be a good time saver depending on your workflow. These date forms don’t tend to save a whole lot of time to me. But what does save time to me is entering the date like this, like we’ve been doing, I’m going to say leave without saving, if I go into a report, for example. And then I go into my balance sheet, when I put the date range in if you put the no dashes and you have a custom date,

If you have to scroll item I typically used to scroll it might be of course different on a Mac than on the windows but we’re in a browser so I would think it’d be fairly similar. I work on a on a Windows based machine. So those are my default settings. I haven’t worked too much on the Mac’s for for an apple for a long time.

I used to but it’s been a long time. So I can’t I can’t really speak to that but we will then have these shortcuts for you. You can test them out on your own and see where they save time. Usually the ones that are going to save time is if you spend a lot of time in one particular area.

So if you’re in the type of business where you’re tracking the accounts receivable a lot, then you might want the shortcuts that are related to that cycle, the cycle happening a lot. Or if you’re in a business where you’re working in a particular department, then it could be of course quite useful to look at the shortcuts that are related to that particular area.