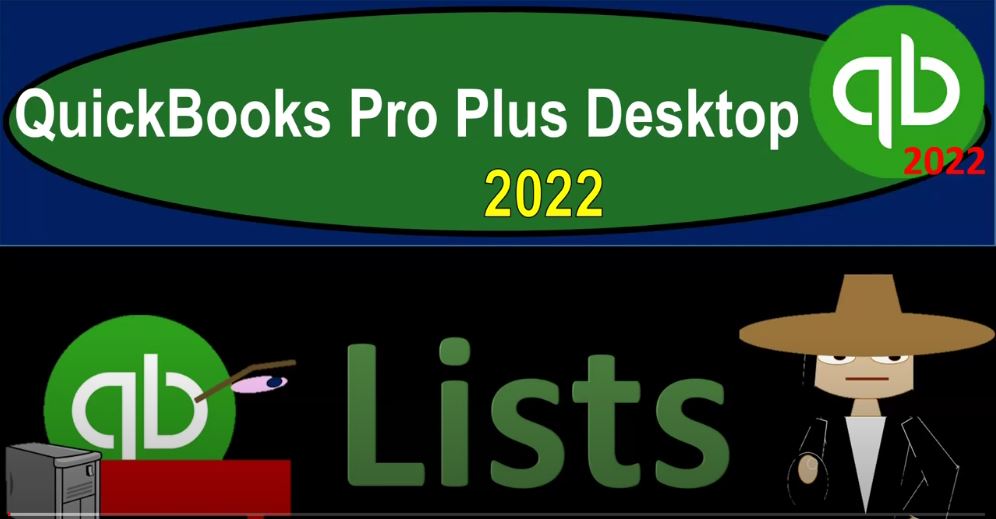 QuickBooks Pro Plus desktop 2022 lists Get ready because we bookkeeping pros are moving up the hill top with QuickBooks Pro desktop 2022. Here we are in our free sample file sample Rockcastle construction going through the setup process with the view drop down selecting the open windows listed on the left hand side, then we’re going to go to the company drop down opening up the home page that opens up in the middle area, we’re going to maximize that home page, we’re going to stop there with the set up process because we’re going to be focusing this time on lists. In prior presentations, we went through most of the items that are involved in the homepage, looking at them by section, which is great, because that gives us the normal items or activities that we would be doing throughout the normal accounting process.

We also looked at some of these special items that QuickBooks thought important and put them over on basically the right hand side, the company area and the banking area. We want to focus now on a couple items that are included in here and basically things that we could categorize under the term lists. Now note that when you’re thinking about the term lists with regards to accounting, and QuickBooks in general, it’s kind of a specialized terms with regards to QuickBooks. In other words, when you think about terminology for accounting, just like any field, you got to understand what the accounting lingo will be the terminology will be understanding accounting terminology. And then as we have seen, some of that terminology will change when you’re thinking about actual QuickBooks software.

And you’ll have terminology that will be different and even more specialized in some ways for people that use the QuickBooks software, which you want to understand. So you can better communicate with other people that are using QuickBooks lists is one of those types of items that is more likely to be used by people that are using QuickBooks software, referring to certain items as lists, the most common two items that are going to be referred to as lists will typically be the Chart of Accounts and the items lists, you might have other, you know, inventory items lists. Now, the reason they kind of developed as their own terminology, I believe, is because they located these items under the lists drop down.

So if you go to the lists drop down, you’ve got these items that QuickBooks has categorized in the format of lists. Now, these two main items can also be found here, you got the items lists, and you got the chart of accounts, you probably want to think of them, however as lists, because that’s might be how they are referred to. And these as well as some of the other items under the lists that we’ll talk about are not items that typically we will be doing on a day to day process, which are found in the flowchart on the homepage, but rather often items that we need to do during the setup process as we put the company file together.

And if you present a future presentation, the items also being in a similar fashion in that in order to populate properly the invoices and the sales receipts as well as possibly purchasing the inventory. We got to know what we are purchasing on those items and what we are selling, whether they be inventory items or simply service items. So those those are going to be things in the list, I’m going to close up this little caret. And let’s just take a look at the lists and see other things that will be included in here. So we got to the chart of accounts, once again,

the underlying foundational item we’ll look at in a lot more detail. In a future presentation, we have to have accounts in order for us to post any of these transactions, therefore, it’s something that you in essence will populate when you start up the items. Same kind of thing with regards to the selling of items. If you’re a service company and the purchase if you sell inventory, you got to set up the actual items so that you can then populate invoices, sales, receipts, and so on. And we’ll talk about them more specifically on their own time.

Those are two really, really important items. Then we’ve got the fixed asset item list. This is one that isn’t always used. I’ll go into this real quickly because I won’t spend a lot of time on it here although we might specialize in on on it at a at a later point. But it’s not something that you’re going to use all the time depending on the company that you are working with. It’s going to give some supporting documentation for the fixed assets that you put on the books, fixed assets being the depreciable assets like equipment, building and so on.

And if you put them on the books you want like a setup ledger for it in a similar way, as we saw with accounts receivable needs a sub ledger by customer accounts payable by vendor inventory by inventory item here, you want a sub ledger by depreciate the depreciable acids. However, oftentimes, we might rely on outside software, such as tax software to help us out with this process. Because oftentimes, we’re going to need the tax return to have a separate schedule for the depreciable assets and be on a tax basis for depreciation as well as once on a tax basis that software can be used to, to then create the book bases as well.

So oftentimes, you might be reliant to some degree on your tax software to kind of help you out with the categorization of the depreciable assets, possibly as the supporting documentation, like kind of like the sub ledger, that you would have to support the dollar amount that you’re putting in on your financial statements for the depreciable assets. So that’s that, so we won’t spend a lot of time on that we might have a special topic just to look at these items, and you know how useful it would be, but that’s going to be those lists. And then we’ve got the price, the price level. Now this is a list in case you want to give special price levels to say particular customers, so that you could set up the price levels and then go to the customer.

And if they fall into a particular category, for example, you might then say that they have a discount due to the fact that they’re, you know, in a particular category. So we get the commercial, industrial, residential, and they’re saying there’s this amount off on the price. And then you could set that up to a particular customer. And then when you select the the item that is going to be there, it’s going to basically apply those, those discounts. So we might talk about that in future presentations. But those are in essence those items, then we’ve got the sales tax code list.

So these are going to be items that help you to determine whether something is subject to sales tax or not, when you turn on sales tax, then these will typically be there by the default, these two are the default, either it’s gonna say tax or non tax, these are two items that are going to appear on the invoices or sales receipts, that will indicate whether they’re taxable or not. And so and so that you can apply the proper sales tax or not. We’ll talk about that process more when we set up the sales tax in our practice problem in the second half of the course.

And then we’ve got the payroll items, when you set up payroll, you’ve got a whole bunch of payroll items that will be in place to help you do the process of processing the payroll, and then accounting for things like the the vacation, and so on the overtime, and so on. And then the taxes are going to be driven by the items to determine and calculate those items, this whole thing will generally or basically be generated as you set up the payroll process.

We’ll talk about that more. In the second half of the course, when we set up, you know, go through the payroll process, we also have a whole course on payroll, then we also have the the payroll schedule list. And so again, something that’s going to be kind of related to payroll, usually you might only have one schedule Are you paying weekly, bi weekly, semi monthly or monthly or the general kind of schedules

you might have there. And then we have the payroll schedule class lists, classes are special thing in and of themselves. And they can be used for multiple different multiple different reasons. So we could set up classes for multiple different reasons and assign transactions to classes, we have a bunch of courses that kind of use the class tracking, to get an idea of when it could be useful to really good tool to have depending on whether or not you have the special needs related to them. But you could set up the classes we have, we won’t go through that in the first practice problem. But we do have some information that focuses specifically on classes.

And then we have the lists going down to the workers comp lists, which is kind of related to a payroll situation as well. And then other lists other names lists. So note when we talk about lists with with regards to our our vendors and customers, we have our vendors and our customers, which we could find in our customer drop down and vendor drop down, we might put some other people in other if they don’t really fit into the category of a vendor or customer and we want a list of those items. And then we got the customers and vendor profile lists.

And then we have the Add, add the list. So those are going to be the general lists. And like I say, most people will refer to some of these things possibly, under simply the name lists, possibly because QuickBooks has named them under the list. We’re going to spend more time here, going over the primary two lists in following presentations, those being the chart of accounts, which is fundamental.

And the item lists another fairly, pretty much fundamental item necessary for the startup process, which underlines all of the other kinds of transactions that are going to be taking place as we go through the cycles that are basically indicated on the homepage with the forms