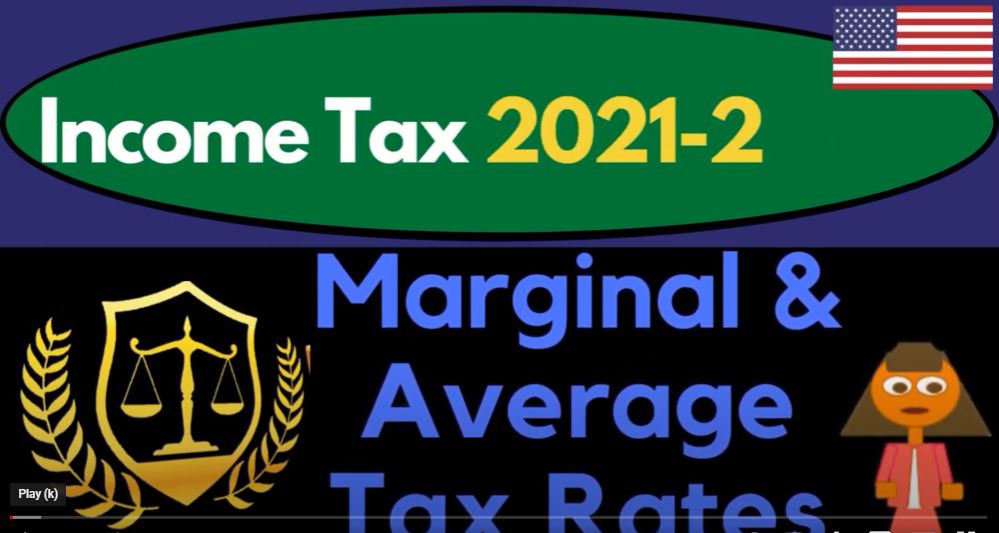 Income Tax 2021 2022 marginal and average tax rates get ready to get refunds to that Max diving into income tax 2021 2022. As we have seen in prior presentations, the federal income tax system in the United States is a progressive tax system,

meaning we have different layers involved, we have different tax rates, the rates going up as income levels go up. But we also talked about the idea that progressive can be a term that’s going to be relative as well.

we can also use the other term, which is often compared and contrasted, which would be a flat tax, while flat tax being defined as a tax that only has a one rate, a flat rate or pure flat rate would only have one rate.

But if you were to decrease the number of layers, you could say that you’re flattening the progressive tax system out in that way, when people use the term flattening. They also mean if they’re using it as a favorable term that they’re trying to make the tax code easier.

So now, if we applied the rates, then when we talk about what what tax rate are you paying, that gets quite confusing as well, when you’re looking at projections out, what should I basically due? If I’m projecting into the future, as I’m making changes to what my income will be in the future?

Then what rate should I apply? Should I apply, for example, an average rate? So meaning, if I get taxed at multiple different rates, I have to take an average of it?

Or should I use basically the last rate, the marginal rate? These are questions we have to ask just from a practical standpoint, and these are questions that many tax preparers don’t understand, because they only know because really, when we do the tax preparation, it’s more dependent on the tax software, we’re just going to be doing the data input, the data inputs going to make the tax return, which is basically an income statement.

And then it’s going to apply the tax. And we’re not going to get into the details of this progressive tax structure, we’re going to let the software do that. So when people ask us questions about what what, how much tax, am I actually paying on a rate basis? It’s a little bit confusing question.

If I’m going to make more income next year, how much more am I going to pay? That’s going to be confusing, because we have this progressive tax system. And we have to understand the concept of an average tax versus a marginal tax to answer those questions.

And those numbers will usually be given in tax software, you just need to understand what those numbers are telling you within the tax shelter and how to apply that as you’re discussing it to your own plans, or to your clients plans. So the progressive tax system, the old recall, is going to have these different layers in it.

So let’s say we earned a you know a lot of money here, the idea then would be that you’re going to be taxed at different levels within it.

which it’s not to avoid earning that last dollar, because because it’s going to cost you a lot in taxes because all of your income would be taxed.

That’s not That’s not how it works. What’s going to happen is that last dollar will be taxed at the 32%. So there’s still a disincentive as the progressive tax system goes up. But the disincentive is only on the added dollars that you’re earning.

So you might say hey, you know, it’s not worth me working any more over and above this income level, because I’m because the government is taking a higher portion that could happen if the rates go up a lot at some at some point. But presumably, you still have the incentive to work, you know, up to that point. So that would be the general idea of it there.

Plus the 12% would then within our mind is times the 12%, that you would have to go through, no one actually does that, because they’re going to use the tax software in tables to help them out with that calculation. But that’s, you know, the kind of complexity that’s in it.

So that’s the idea. Again, no one actually does that. Because that’s a really tedious thing. And it’s not only that, that you’d have to do in practice on the tax return, because there’s some times when they actually apply a whole different tax rate altogether, such as for like capital gains tax could be at a different rate. For example, dividends could be taxed at a different rate.

So when you actually get to the tax calculation, you almost have to be dependent on the computer to calculate it and help you out with that calculation.

much tax Am I actually pain? What’s the rate that I’m actually paying, if I’m paying the progressive income tax system, I would like to know that ratio just so I can understand, you know, what is going on here. So for that, you can either use an average tax, or you can take a look at the marginal tax rate.

So the average tax rate is going to take the total tax, which you’re actually paying after you do that calculation, which most people will get from the tax software and divide it by the taxable income,

the income statement, some of which some of those deductions are not really expenses that you needed to incur in order to generate the income, which you would think would be natural type of deductions.

So even that, it’s still a little bit confusing in terms of what you’re actually paying, based on kind of your income. But that’s one method, you can kind of see this is my taxable income, compared to my tax.

Now, the other thing that kind of throws a wrench into this confuses this whole thing is the credits. Because when you take the credits that are going to be involved, which we’ll talk more about when we get to the income tax formula,

that also kind of kind of confuses things a bit. So we’ll talk more about that later. But for now, we’ve got the 20%. Now, if you’d look at the marginal tax rates, then you’re just taking the last tax rate that applies.

In other words, if you’re doing tax planning or projections for yourself or others, and you’re saying, Hey, I’m going from something my income is going from, like, let’s say 40,000, and it’s going to go up to 50,000.

And so that’s going to be a really relevant number important number, when people are doing projections, you want to be careful with that. So if people ask you the general question, I just want to know, you know, like, what’s my average tax that I’m basically paying? Just so I know, like how much I actually pay? Well, that’s gonna be the average tax.

But if I want to know, hey, look, I expect to make more money next year, what’s going to be the impact on the margin? And that’s an economic term from economics on the margin always means, basically, what’s what’s the pros and cons of the next step. I’m already here. What about the next step?

But just from a formula standpoint, this is just the income tax formula. In Excel. We’ll talk more about it later. But let’s say you just had an income of 100,000. And we only had the standard deduction of the 12 550. That would give us the taxable income of the 87 450.

But here’s your 1040. And then if you were looking like a tax summary, most software has some kind of tax summary, which will give you kind of a side by side from the prior year.

I don’t have anything in the prior year, but they give you these items down below the marginal tax rate is the highest tax rate that was that was applied out here. And then the effective tax rate is the average tax rate.

So if someone is asking, you know, how much did I pay on average? Well, you can you can explain the calculation, but we’re talking 17.2% The marginal tax rate, what’s the highest tax bracket?

What am I going to be paying taxes on if I earn more money in the future? 24 is your current marginal tax bracket and if you go above a certain level, you’ll be going up above and paying the next bracket up.

And usually tax authors in the diagnostics and in the analysis will tell you when they will hit that next level or the next tier so you can appropriately give some advice in terms of what earnings might do in the future.