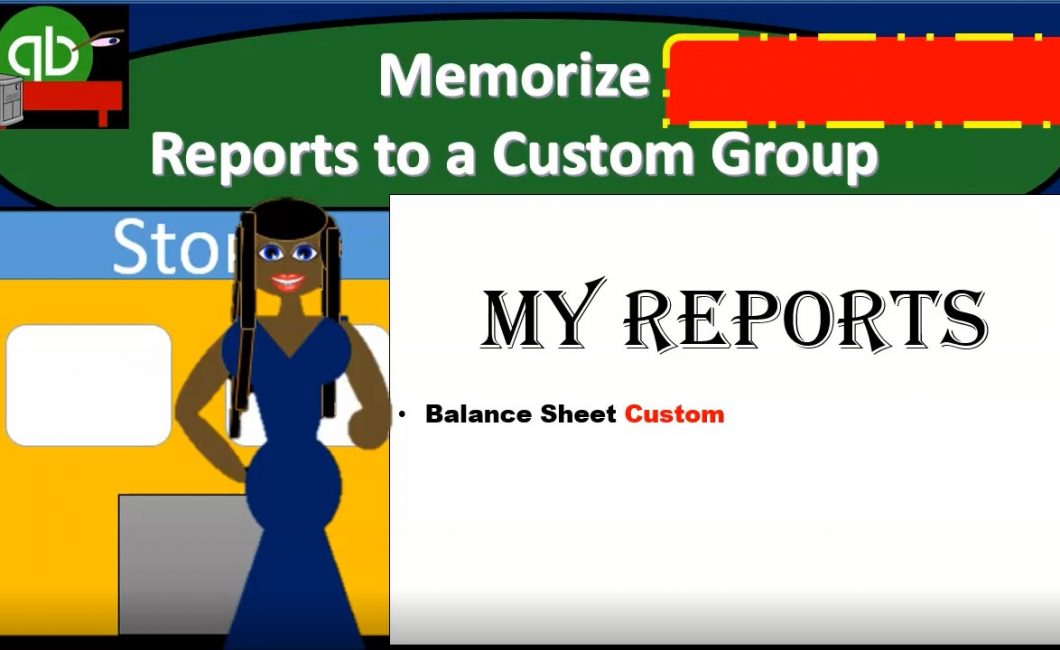 Let’s do a little bit of adjustment. Let’s make it into that comparative balance sheet. So we have something worth memorizing. Once we’re done with that, then we’re going to go to the memorized report field up top. We’re then going to memorize it, we’re going to change the title of it will memorize the report. And we’ll put it into a specific group that we have set up called my reports. Now we set this up in a prior presentation to put it into my reports that is located in if I close this back out, the reports drop down.

If we go to the reports center, then you’ll recall we have the tabs up top the standard tab. And then the memorized reports. Here is the categories that we can put these memorize reports into, on the left my reports isn’t quite there isn’t there yet, because there are no reports in it. However, if we go to the Edit, memorize report setting up top, you’ll then see this layout of the of the reports and there is our grouping that we had set up by selecting the memorized reports drop up or rise up, and then and then creating a new group. I’m going to close this back out now. And then we’re going to go back to the balance sheet, we’ll go into the balance sheet. And then I’m going to customize this making a competitive balance sheet. 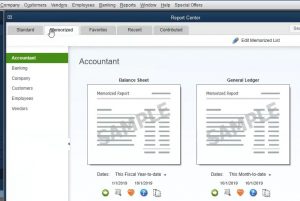 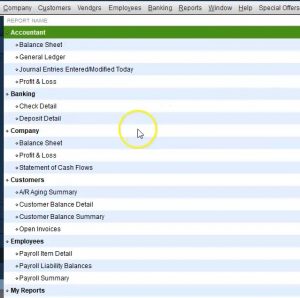 And then I want to see the previous period, I want to see the change in dollars the change in the percentage, then I’m going to go to the header and footer Tad, I would like to remove the date prepared time prepared and report basis, we’re going to say the balance sheet is going to be a comparative balance sheet. And I’m simply going to call the dates are going to be let’s say january, february 2020. So that’s going to be our adjustments there will then go to the fonts and numbers within the fonts and numbers Report, I’m going to say that I would like to see the parentheses around negative numbers, make them read, I would like to remove the pennies, remove the cents. So that’s going to be our adjustments if I say okay, and if you just I’ll just go through this one more time. Here’s the header and footer. And then here’s the Display tab. 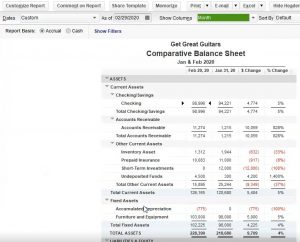 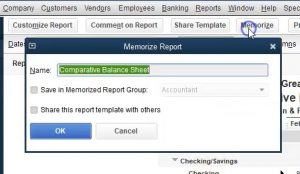 Then I’m going to select the category which I want to put it into my reports, and then say, okay, so we’ll say okay, and then it takes a picture, if you have the audio on it’ll sound like a camera kinda. And then we’ll then close this. And then if we go back into our report center, we’re in that memorized reports within the report center. And you may have to refresh it in order to see the my report. So if it’s not showing up, you can close it back out, go back to the reports, go to the report center to kind of refresh the screen. And then I’m going to maximize the screen, we’re going to go back into memorize reports. And then you should have my reports here. The reason if it’s not there before, it’s because we made a change to add a report to a grouping which had nothing added to it prior to that. 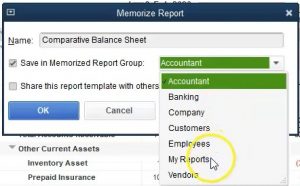 So then if we go into the my reports, there is our competitive balance sheet. If we were then to run that report, then we have our competitive balance sheet and we have a lot of changes that are going to be there for us. And we can you know if if there are other users are using the QuickBooks system and don’t know how to make those changes, then this could be much easier to allow someone else to use the system. Also easier not to forget, you know, the kind of change changes you’ve made can be kind of confusing to just remember, should I put the comparative here or should I change the dates and whatnot, which you may still have to do as the dates change and whatnot, and to change the things like the you know, the red numbers and these type of things. So that’s one way to have the the memorized reports. 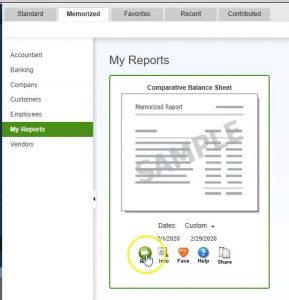