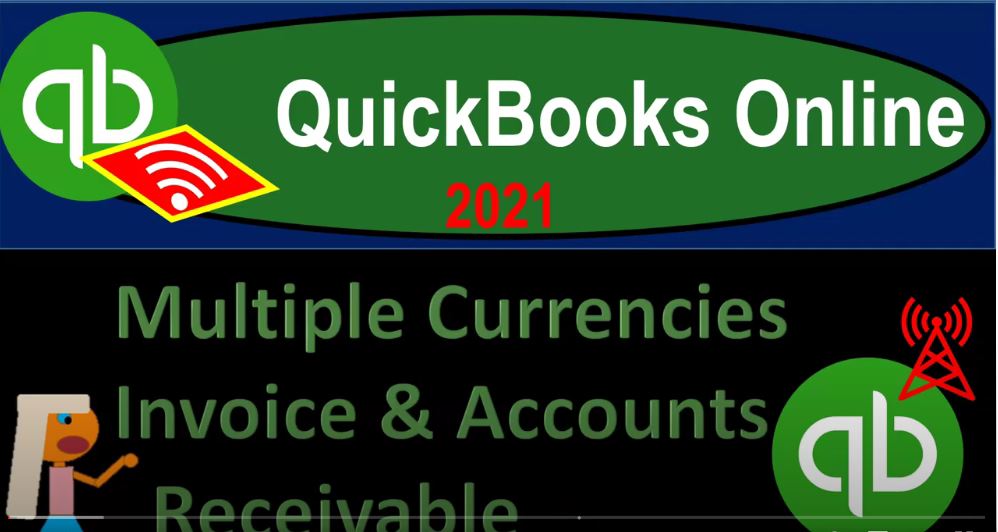 And then when we get paid later, we’re not going to get us dollars, we’re going to get a foreign currency, which means we’re gonna have to revalue once again what we get, and it’ll be something different most likely than what we put the the transaction or the accounts receivable on the books for because of the difference in the exchange rate of the foreign currency as compared to our home currency logistics of this will basically be this, we have to then go down, we have to make sure that we have the currency set up that we’re going to be using, in this case, we’re going to be using Canadian dollars.

So remember, every customer that we set up has to be applied to a certain currency. If we have one customer that pays us in different currencies, say US dollar and Canadian dollars, we need two customers, even though they’re the same person to represent the two currencies that we’re going to be receiving in closing this then back out, we can then create the invoice up top creating the invoice. And then we’re going to be saying this has got to be going to a customer that is in the foreign currency. And that will help us out now QuickBooks is going to help us out with this exchange item down below.

It’s basically picking up the current rate, the basically the spot rate down below here. Now let’s go ahead and think about this in terms of an Excel worksheet just so we can see what we expect to happen. And then we’ll go up here and figure it remember when we see it in QuickBooks, it kind of magically happens, right, it’s going to record the transaction, kind of magically, we’ll check it out on the financials, let’s first think about it down here, in Excel where it’s not as magical, we can see exactly what is going on. So a transaction that’s going to be happening and we’re making a sale.

The confusing thing here is that even though we’re going to get paid in Canadian dollars, we’re still going to value this receivable in US dollars, we just need to recognize that this account is going to be one that’s going to be representing us doing transactions in a foreign currency that we’re gonna have to revalue in the current currency. And then the sales item is going to be just revenue down below. And so there we have it.

Obviously, we don’t know what that is. But we could speculate that, however, we don’t typically do that, right, we’re gonna, we’re going to say the sale happened. Now, we’re going to put it typically generally on the books at whatever the exchange rate is now, which is often sometimes called the spot rate. So we’re looking at the spot rate, if we were to then exchange our money for foreign currencies at this point in time, that would be the current rate, that would be be looking at.

And we’re going to say it’s going to be this in the future, right. And that means that we’re going to have to, we’re gonna have to have an adjustment, because now we got paid and something that has a different us equivalent dollar. Due to that timing difference. We’ll talk about that later. Let’s put this on the books, then let’s put this on our books and say, all right, so I’m going to change the date back to last year. So we’re not in the in the future. So I’m going to say 3120. Let’s say this is Oh, 30120. Watch what happens to the exchange right here. When I hit tab, I hit tab, and it changes the exchange rate. So it’s actually populated the exchange rate.

And that’s what’s really nice about QuickBooks, it can pick up the spot rate for us and use the information that QuickBooks has to kind of pick up the spot rate. And that’s really helpful. So that’s going to be the rate that we would be using. However, we want to use kind of our example rate here for our example problem. So I’m going to use then this point six, five, just for a nice, easy example problem. So I’m going to say this is going to be point six, five, I’m adjusting it 2.65. It says you’ve changed the exchange rate of the Canadian dollar ca D for Sunday, first March 2020.

So that means although we’re going to get 42,000 Canadian dollars on our books, we’re going to put the US equivalent in the accounts receivable 27 three and the sales at the 27 three, let’s check it out. So we’ll save it and Close it, save, I need an email, do I need an email, I don’t want to send it, I just want to close it, save it and close it. I said it right, but I did it wrong. I do that a lot. I’m going to go up top, I’m going to right click on the tab up top, we’re going to open up the financials, right click on the tab, and then duplicate it.

And then we’ll do that again, right click on the tab again, duplicate it again, we’re going to be opening up the good old PnL and the balance sheet. And then we’re going to go to the reports on the left hand side, let’s open up the good old Profit and Loss report. And I’m going to bring it back to 2020. So we’re working in the past, oh 101 to zero to let’s say 1231 to zero, run it hold down Control, I’m going to scroll up just a little bit to get to the one to 5%, which is where I like to be closing up the hamburger. It’s the perfect zoom rate.

Next tab over and then we’re going to then go down and then do this again, go into the reports. And let’s open up the BLS balance sheet report this time, that’s my favorite one. And then we’re going to go and close the hamburger change the range again from a 101 to zero to 1231 to zero. Let’s run it. Alright, so now we got our accounts receivable on the books at that 27,300 which once again is the US equivalent. If we go into that, then we see our transaction if I go into that, and then it’s going to take us back into our invoice, we’re basically zooming down and drilling back in and there’s our item going back up top, let’s close this out, and scroll back up top and go back to our our report. And notice it created an accounts receivable account for a CA D here.

So there we have that, let’s go back on over to the first tab. The other side, of course, is rolling into net income, which rolls into the equity section. Let’s go to the income statement on the income statement, we have sales of the 27,300. That’s in the US dollar equivalent of the foreign currency we expect to receive in the future. And you might be starting to think well, that’s kind of, you know, that’s kind of funny, because, you know, I don’t know, like what if the foreign currency changes, or what if I know the foreign is current isn’t like that kind of manipulating things, possibly if you’re pretty confident that the currency is going to change in the future.

And you could get into kind of questions like that, because obviously, again, we’re going to get paid in the future in foreign currency. And we’re putting it on the books at the current kind of exchange rates. And if you get into hedges and other kinds of things, then things could get a little bit more complex. But the general idea is that we’re going to put it on the books as of the current date, because that’s when the transaction took place.

And then if there’s a change in the future, we will record the difference in terms of a gain or loss on the exchange when we get paid the difference between the exchange rate when we first made the transaction and that when we receive the foreign currency money. Also note that that there could be another complication if we have to do adjusting entries before we get paid. In other words, if we still have, for example, back to the first tab, this accounts receivable on the books at the end of the month, and we need to then create the financial statements,

then we have that timing difference once again between the exchange rate when we did the transaction and the exchange rate not when we got paid because we didn’t get paid yet, but the cutoff date into the month or year. And we might need to revalue then our our accounts for that difference in the exchange rate which can kind of complicate things a little bit as well. So that’s where we’ll stop here. And but one more thing I just want to add just like we have on this Excel worksheet over here I want to put on place just our beginning balances for cash,

There we have it, let’s go ahead and save that and close that just so we can we can have some money on the books in the US currency. Let’s go back then to our balance sheet to check it out. I’m going to run that report, run the report. And so there we have it. Now we’ve got the 100,000 on the books other side in retained earnings that basically matches our trial balance over here. Let’s go ahead and open the trial balance the trial balance is another report that’s really useful to look at, it can kind of simplify things.

So I would get used to checking it out. And it’s a good good report to check our numbers we’re so let’s do that by going to the accounting tab, I’m sorry, the reports tab. And then I usually just just search for the trial balance, I might make it a favorite report as well as well. But trial balance, trial balance, and then let’s go ahead and say a 101 to zero to 1231 to zero, run it close the burger, hold CTRL and you can see this is a much cleaner report to kind of look at right so now we got our checking account US dollars,

accounts receivable, Canadian dollars, retained earnings and then sales. This is on the income statement that ties out in essence to what we have here. So everything kind of works out we’ll do the same kind of method going forward, putting it into the Excel worksheet where we can see it in a more transparent type of way. See the calculation, see the posting, and then into QuickBooks where the magic happens.