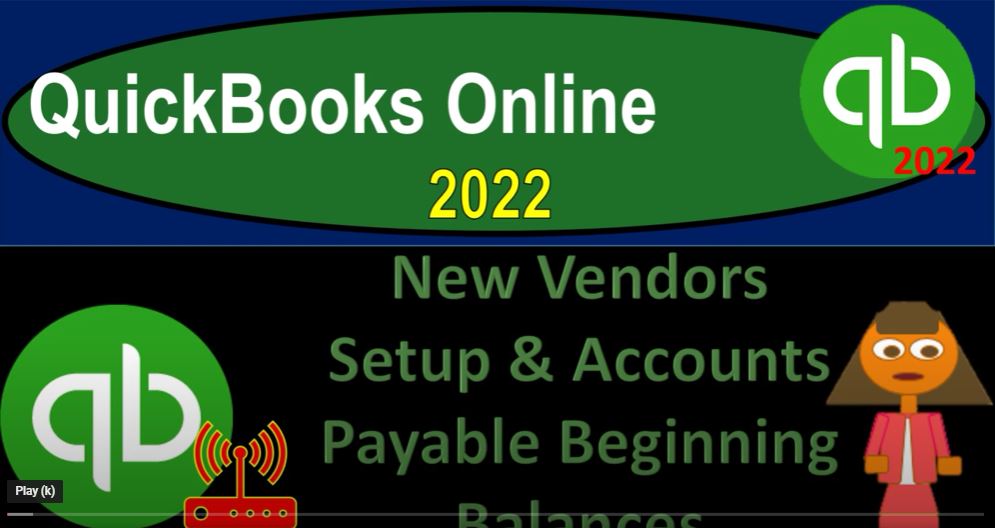 QuickBooks Online 2022 new vendors setup and accounts payable beginning balances, get ready because it’s go time with QuickBooks Online 2022. Here we are in our get great guitars practice file that we set up with our 30 day free trial holding CTRL down scrolling up just a bit to get to that one to 5%.

Our concept here, by the way, before we do will be that we’re trying to enter all the beginning information in terms of the underlying foundations that we need to enter before we start entering the financial transactions on top of them for the current period that we’ll be working on to create the financial statements balance sheet and income statement.

The financial transactions typically be an input with the items in the plus button, the invoices, the checks, the bills, the pay bills, and so on and so forth. But you first want the foundation input, so the input of those data input fields are as easy as possible.

That is what we are doing now. We’ve been entering like the more difficult ones first, we’ve entered the inventory items, we have entered the accounts receivable items.

Now we’re going to enter the accounts payable items, which also has another added issue with it, like the accounts receivable in that we not only want to have the balance in there, which we could just do with a journal entry if that’s what we were concerned with.

But we also need to know who we owe the money to this represents us owing other people money. And we need to know how much we owe each individual so that we can then pay those individuals at some point in the future.

Therefore, we have another sub ledger kind of problem that we have to deal with. So it’s going to be similar to the receivable issue. Let’s go back on over to our reports here.

This one will be located, you could think about this, you might say well, the first thought an accountant might have if you know debits and credits is to say, well, I’ll just go to the New button up top and enter a journal entry. And I’ll increase the accounts payable. But it might be a little bit difficult to enter the vendors that way.

And even if you entered the vendor, that way, it wouldn’t have like the bill form that’s easily then matched up to the Pay Bill form. So we could just go right for from our accounting process with that bill in the system.

And you might go into the accounts payable, for example, which would it’s an order by type. So we’ll go down here to the A to the P, accounts payable, and you might use the register and say I’m just going to enter something directly into the register here, that would be similar to enter in a journal entry, same problem, you want to enter the actual bill. So what we’re going to do instead is open up the hamburger.

And we’re going to go into the pay they get paid. But now we’re focused on the pay side of the get paid and pay that they kind of crammed into one area here, and we’re on the vendors down below. If you were in the accounting view, it would look like this you would be in the Expenses tab.

Now, because we’ve done this importing thing in the past, we’re just going to add one vendor. But if you were to import it, it would look similar similar process as we did with the customers.

And you can you could set up your file, similar process as we did with the items. But we’re just going to add the one singular item. As we do this. It will also be similar to the customers as well in terms of the simply the data input form because it’s going to be the contact information and so on related to the vendor.

If you had an address that you need to down here you can put the address I’ll put the eight O’s Cynthia Street, I’m not sure that’s exactly right. But I’m going to keep it with a practice problem Beverly Hills, California.

So I need a lowercase i here on the hills, and the zip codes going to be 90210. United States. And then we’re going to have notes, no notes, no attachments, the email address you could have,

I’m going to call it Sam at let’s say it was at fifth phone.com Sam at the phone.com phone number 555-467-5212 for mobile, no Tab, Tab, other other tab, website tab billing rate no terms, let’s set the terms at this is going to be will to net 30. On the terms opening balance.

Now here’s the key for us to enter this beginning balance, you’re not going to use this most likely any time other than when when you enter the first this first vendor in place.

But it’s not it’s in the prior period, therefore that expense will roll into equity. And everything will work the way it’s supposed to. Do we need to track a 1099 for them, I’m going to say no. And so I’m going to say let’s do it, let’s say save it. And this phone number, this is a wrong email.

Or what if I said sam@gmail.com, that one probably exists. So we’ll save that. And so there we have it, that’s not a real email. So don’t email Sam or anything are getting mad at us. Like as if I don’t know who that is. Someone’s email probably. But in any case, then we’re going to say that should that should have recorded a balance for it.

So let’s open up our financials right clicking on the tab up top duplicate, go back up top right click again and duplicate Ultra vase another time. And then we’re going to go into the reports which are going to be up top in the business view,

if you were in the accounting view, by the way, the reports would be located in the reports, which is kind of more clear seems like but in any case, we’ll stick with the business view here going to open up the balance sheet, balance sheet, and then I’m going to go up top and we’re gonna range in the changing from

Oh 101 to one to 1231 to one and run it closing the hamburger holding control scrolling up just a bit. And so now we’ve got accounts payable on the books at 15,000 is just what we wanted. That’s exactly what we want it to happen.

And it happened, making us the happiest people in the world. And then if I go into it, if I click on it, and go into it, notice that put it in there with a bill form.

So if I go into it again, drilling down to the source document, it put it in there with a bill form, it just made a bill form out of nowhere without a with a vendor name of the Epiphone and it just put the other side into miscellaneous expense. It’s like whatever, we’ll just put the other side in the miscellaneous expense. So that means that went to the income statement. Let’s close it back out.

And check it out. Scrolling up, go on back, then back, get on back to the end. So the other side is on the income statement. There it is. It’s included in that five, five. So let’s go is that going to cause us a problem? I don’t think so. But let’s see why. Let’s go back to the second tab.

So now we’ve got 20,500 from the prior thing, the receivable and then it just made this bill and dumped it into other miscellaneous expense. If I go into it, there’s the bill. And there it is.

So there’s the bill. So if I go back, is that a problem? Because no, I don’t want anything in my income statement. But this is as of the for my cutoff date. So as of the cutoff date, when we’re starting the news file, which is January 1 2022, this will all roll into equity will not be a problem.

If you want to look up anything prior to the cutoff date, January 1 2022, you should be looking at the prior accounting system, whatever that was, therefore, I’m not worried about any junk prior to this as long as my cutoff numbers are okay.

And if I scroll up and change this to the current period where I want where I’m concerned with the information in this file, then I can change the date and just check it Oh 101 to two to 1231 222 twos.

If I go to the next day, it’ll all roll into retained earnings where it should be as of when we want to be working on stuff.

The opening balance is still ugly, but we’re going to fix that at the end just making a journal entry taking everything out of whatever miscellaneous equity account they put it into and put it into the proper account, which for us will just simply be retained earnings at that time.

So we’ve got the 15,000 on the books we’ve got. We’ve got the balance sheet working out everything else is washing out to equity as is the plan. And so everything is going according to plan and the plan has come together, which I love. I love it when the plan comes together.