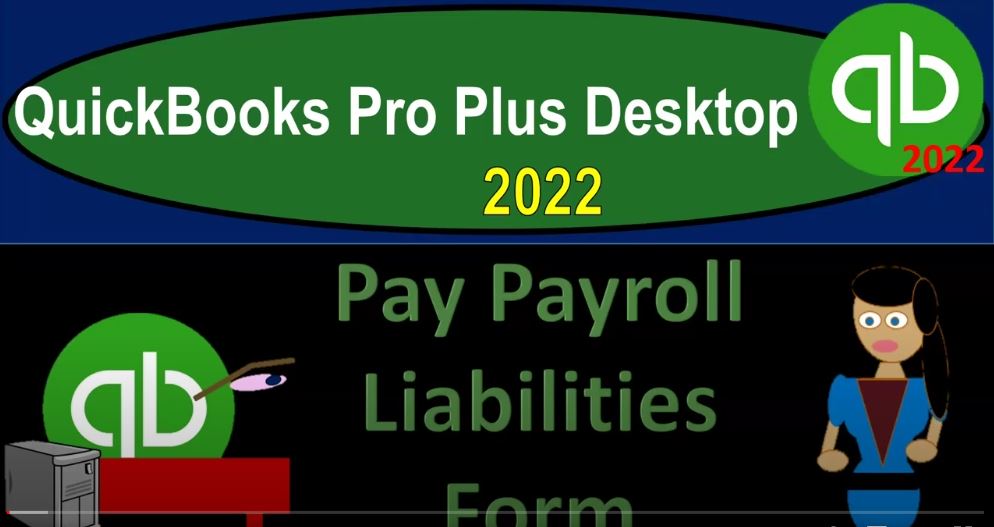 QuickBooks Pro Plus desktop 2020. To pay payroll liabilities form, get ready because we bookkeeping pros are moving up the hill top with QuickBooks Pro desktop 2022. Here we are in our free sample file sample Rockcastle construction going through the setup process of view drop down selecting the open windows list which has now opened on the left hand side company dropped down home page opening up in the middle maximising that home page, then reports drop down opening up the major financial statements company and financial going on down to the balance sheet. I’m also going to be changing the font size.

So I’m going to go to customize reports, fonts and numbers. You may not need to do this font change font, but I’m making it bigger for the presentation purposes 14. Okay, yes. And okay. And you might be saying do I have to do that every time you could memorize the reports, which we’ll talk about later. But for now, we’re going to do that basically, every time reports drop down company and financial, we’re going to look at the profit and loss standard. And then we’re going to go to customize reports up top again, fonts and numbers, font change, bringing that up to 14 once again.

Okay? Yes. And okay, so there’s our setup process, we got our three items open on the left hand side, going back then, to the home page, toggling over we’ve been looking at the employee cycle, or the payroll cycle, prior presentation we focused in on the pay employees, which is obviously the big component of the actual payroll process, which should be fairly straightforward if you have a system set up so that you set up the payroll prop the payroll properly.

So whatever the payroll process has been set up to do, we will process this periodically, typically weekly, bi weekly, semi monthly, monthly. As we do so as we saw in the prior presentation, we will then be withholding taxes from the employee, as well as other things we might withhold, such as benefits from the employee. And we also had to pay our taxes our portion, those things we have not yet paid when we processed it, when we processed the pay payroll, we only paid the employee he for the portion that they’re actually going to receive the amount that were took out of their paycheck directly for them, the payroll taxes and the amount of payroll taxes that we owe on their wages are now recorded as liabilities at that point in time.

And that indicates a decrease to the checking account for the payroll checks. That check however, represents only the net Check that went out to the employees closing this out. And that’s at the point in time that we processed the payroll which we looked at last time, if I go to the profit and loss then and we go down to the payroll items, payroll items, this gross pay, double clicking on that, we then have the information in here representing the paychecks and the paychecks represent the the total pay the gross pay that went out.

So now at this point, we’re going to sit Okay, so now after processing the payroll, we’ve got the federal withholdings, that’s what we took out of the employee paycheck that that was for for their federal income tax, not our federal income tax. That’s what we’re going to use to put on their W two so they can file their 1040. Then we have the federal the FICA taxes, which include Social Security and Medicare. This includes both the employee portion and the employer portion.

We have the federal unemployment tax, which includes just simply the employer portion that we have to pay that is accumulating every time we process the payroll. Typically we got the state taxes I won’t get into these in detail because those will differ from state to state and the state disability the workers comp also will different depending on the institution, and then we’re going to have the benefits that might have been taken out. And once again, those are things that are going to increase because we took them out of the check, and we’re gonna have to pay them at some future point. So now we got the situation that we’re going to process the payment.

So if I, if I go back to the homepage, you might say, Well, why don’t I just issue a check, then a cheque type form something that’s going to increase the checking account and pay these off. And instead of writing a check, however, we’re going to use, of course, the pay liability widget, which will, in essence, still generate the checks, but will also indicate that it’s done so with a widget, the payroll liability widget, and it will help us to manage those liabilities as they become due if we had set them up properly, as we went through the setup process kind of in a similar way, as the pay bills feature helps us to manage the bills that we have entered and are going to be paid off.

So the fact that it has its own little widget down here can be nice, should be useful to help us make sure that payroll is being processed properly. So let’s go into that widget. It might give you some little air signs and whatnot, because we’re in our practice file, but we’re just testing it out. And that notice that takes you into the employee Center, which you could also get to from the homepage in the employees, or you go to the drop down here to the employees center, you’ll note that it’s on the payroll side, at this point in time, I’m going to close the thing, the widget or the icon on the left. So then these items up top are the checks then that it’s saying,

hey, look, you got to pay these things. So we got the California and disability insurance, the California withholding, the federal, the health insurance, and so on. And if I scroll back down, we got the other checks that are going to be generated. And they should automatically generate as they’re going to be due allowing us to process the payments as as basically easy as as possible. If we have everything set up properly. If you go into one of these checks, for example, then it’s going to show the check form which of course looks just like a check form up top in that the check form represents the decreased to the checking account.

Down below, however, wehave a bit of a different, we’ve still got the expenses on the left. But on the right, we don’t have the items tab, which you typically see on a check. But instead payroll liabilities tab. And so that’s a little bit different. And then you got these two items down below. So it’s still kind of like a check form looks very similar to a check form, it is in essence a check form.

But it’s going to indicate that it’s a special check form. And it’s going to be paying off the payroll so that we can more easily zero in on that payroll information. So I’m going to then close this back out. So once we I’m going to close this not recording it, once we record these, then the transaction will be fairly straightforward just as off as if we were paying off some other type of liability. In other words, if I open this back up, and we go back to the balance sheet, once we process the payments of the liabilities, we would expect then the checking account up top to go down,

I’ll close this back out again, we would expect the checking account to go down. So that’s a decrease the checking account. No note, you can also increase the size here if you want, I’m going to customize it fonts and numbers. If you’re zooming in or spending some time here, I’ll put this one only up to like 2011 Maybe, and say okay, yes, and yes, and it squishes everything together, I might then remove some accounts like maybe I don’t need some of the accounts involved.

which they indicate with a special kind of name here, again, that being the liability checks with the kind of liability check. That gives us a bit of an indication that we’re using like a widget. In order to pay this off, we didn’t just write a check form, we use kind of like the widget, which is going to be paying off a liability check. So if I double click on it, we get another that check form.

we will process the payroll widget, decreasing the checking account, writing the checks and then decreasing these payroll liabilities. So if we, for example, went into the federal withholding, and you could make this a little bit larger, I could say, Okay, let’s make that larger fonts. Font group, I’m going to go into let’s make it just 10. This time, okay? Yes. Okay. So there we have it, and then I’m going to remove the class field altogether. So there we have this, and the type is really what we’re focused on, let’s open up the split field a bit, open up the data a little bit.

you’re going to see a similar trend, by going to the FICA account, we should see a similar kind of process it’s going to go up and then we’re going to pay off way down here with the liability checks, paying off the liability checks and it goes back down to zero, this one being a lot lot larger because we have that kind of matching situation for each of the each of the employees closing this back out as opposed to this one being just an employee tax.

And then the Federal Unemployment Tax similar type of situation this is just an employee or tax so it accumulates upwards and then we pay it off with a liability and then we have the same with something like a plan that’s going to be like health insurance which is a voluntary Lee withheld situation. We’re taking this out of their paycheck on their on their behalf at their request, instead of mandatory and you got the similar process it going up and then of course we pay that out, bring it back on down to zero