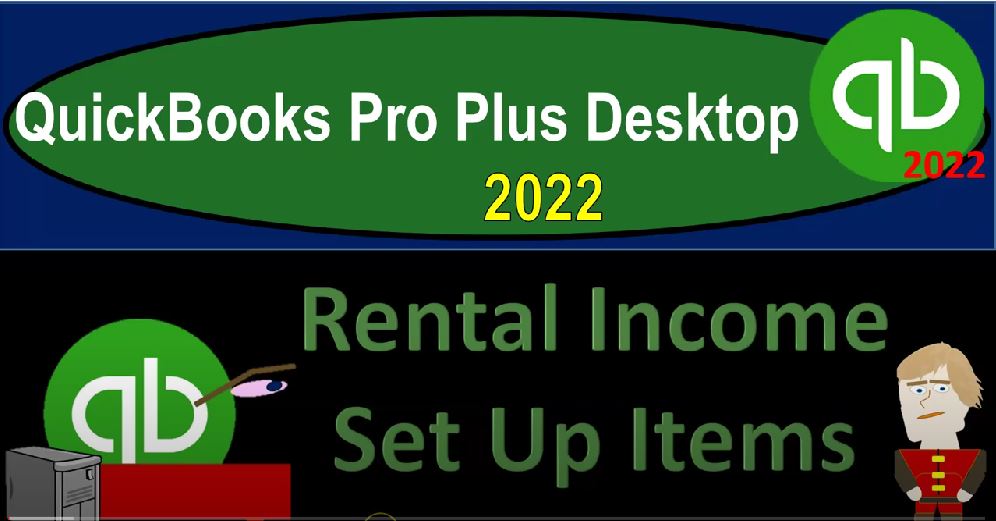 QuickBooks Pro Plus desktop 2020 to rental income set up items get ready because we bookkeeping pros are moving up to hilltop with QuickBooks Pro Plus desktop 2022. Here we are in our get Craig guitars practice file going through the setup process with a view drop down the open windows list on the left hand side company dropped down homepage in the middle maximizing it to the gray area, not opening up the financial statements at this point because we’re setting up our items for our rental income scenario being at this point, we got our guitar shop set up, we’re selling guitars, we’ve got guitar lessons going.

And now we’re thinking about renting some of the equipment out in order to pick up another revenue stream another revenue source, the concept being that we’re going to have customers request for equipment, possibly a standard band set or something like that. And we’re going to ask for a security deposit when they request it. So we can revert, we can reserve that equipment for them, when they pick it up, then we’re going to collect the rest of the rental income at that point in time. So if you’re going to set some process up like this some kind of rental type of system up, then the first thing we need to think about is what are going to be the billable items for and how can we do the billable items.

And we want to make this as easy as possible, so that anybody can basically set it up, we don’t want to be agonizing over what’s going to be the in the guitar set, or what’s going to be in the standard band set, or how we’re going to build the standard band set, we would like to come up oftentimes with some kind of package deals and you can rent it for so long, like a weekend or two days or this long or possibly a week or something like that, and have it set time frame and let those fall into a standard set timeframe so that if someone is booking the rental information, they can go right into the invoice, for example, or the deposit that deposit that we’re going to be receiving, and book it pretty easily.

It will be a lot more difficult if you have like a more complex kind of setup with regards to how you’re going to be building out the band sets. And you’d also like it. So you can advertise and say we’re going to give a standard band set, for example, for a set price. So if you’re thinking about the items, then that’s going to be the first thing that will be driving the simplicity of the process, we’re going to go to the lists drop down and look at the item list, then now you might say that I’m going to put in my items per per item. So you could do that you can have someone construct what they need,

and their guitar and their band set. So every guitar is going to we’re going to charge this much for how many days or something like that. But again, that gets a little bit more complex, that’s one way you could do it, you can also try to say, Hey, I’m gonna give you a standard set. I mean, this is gonna be a standard kind of guitar. So it’s got two guitars and amplifier, and you know, drums in it or something like that. And you can maybe have some flexibility within that standard guitar set and possibly have add ons from that guitar set.

And that might be some kind of standard kind of way to go. If you’re thinking about something like this, that could have multiple pieces, saying, This is the ground floor in order for us to provide the rental process. And then you might have some kind of add on features from that point in time that are common kind of add ons that you could charge basically more for, or something like that, let’s consider that we’re gonna, we’re gonna set up a standard kind of band setup. So I’m going to say, items drop down or rise up,

I’m gonna say it’s a new item. And we’re gonna say it will be a service item, because we’re not selling the inventory, we’re just renting it. And we’re just gonna call it a band set number one and assume that hat that has some standard kind of equipment that we’re going to allow it to be in place, we’re going to say, hey, we’ve got these guitars on handle all the time, you could choose, you know, from within this range of guitars with for two guitars, possibly, then, you know, a microphone within this range of the microphones that we typically have in place, and then possibly a drum set or something like that. For standard set.

Obviously, I’m, I’m not, I’m not an expert on the band sets here. So I’m just given a standard idea of what you might end up doing in terms of packaging your products. And so then we’re going to charge a standard rate for that, let’s say it’s going to be 2000. For that, for whatever time frame, you might be saying it’s gonna be 2000 for a couple nights, two nights per weekend or something like that. I’m going to say that it’s going to be non taxable because we’re not selling it. And then for the accounts, we could call this service item, or we might want to set up another account. Remember, you want to be careful about how many accounts you set up for the income accounts.

You don’t want to set up another income account for every item you sell. But a major category like like rental equipment might be might warrant then another category on the income statement. So we might say let’s set up another income account as we do this. And let’s call it our rental income, or let’s to call it equipment rental in Come. And so we’ll keep it at that it is an income account. So I’m going to save that. And so let’s do that and say Save. And then let’s add like one or two more for an add on type of thing, if they had some kind of add on that they’re going to include that would increase the price. So I’m going to edit again, or item and then new item.

And I’m going to call it just rental add on, you know, guitar, so let’s say they want another guitar or something like that. I mean, we can add that on another guitar for you know, $50. And it’s going to be a non taxable, non taxable account. And it’s going to go to the rental income account, and then save and close. And then I might say, one more edit, I have not edit, I’m not editing it and hold on a second, another item, new item. So then we might say that we want another item that’s going to be rental, add on Amazon amp, I can add on amp of some kind.

To make it louder, they want it louder than than it is let’s say that’s going to be 40 and non taxable. And it’s going to go to the rental income account. Rental income, what did I call it, I call it equipment rental equipment rental account. So those are going to be our items. So our general our general items. So I’m going to save it and close it, save it and close it. So now we have our item set up.

If I go back to the homepage, then next time what’s going to happen is we’re going to imagine that we have someone calling us that they want to set up an E rental process, and that we would like someone to be able to use those items to kind of guide them to what the standard kind of rental process would be, be able to then collect a down payment on it for the future rental process to reserve the equipment.

Then when they come in and pick up the equipment, then we’re going to you know, collect the rest and invoice at that point in time. So that’s going to be the general the general concept next time. We’ll go in with that customer deposit