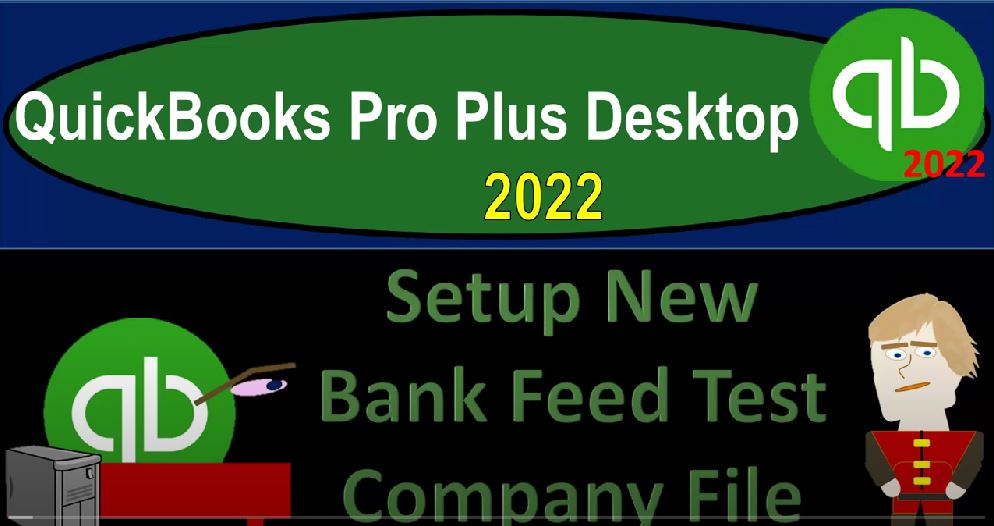 Notice that as you set up a new company file, you want to be aware that you will have and create a new file it’s kind of like a similar process. If you were to work with a Microsoft Word and a Microsoft Word document, the Microsoft Word being the program, the document being what is opened within the program, similar kind of system here, this is going to be the program icon for QuickBooks, we’re going to create a QB W fi which will be the data file store that in this folder,

Also, you want to have the data file have its own folder, not simply putting it on the desktop, for example, because there’s often other junk that will go along with the data file. And it can clutter up the desktop and or any other folder where you got a bunch of other stuff in it very quickly. Therefore, you want to put it in its own folder, so it doesn’t clutter up anything else.

So let’s do this, we’re going to be opening up the QuickBooks software, oftentimes it will then open up to another file the prior file that you had open, if it does, so you could close that file, or you could just continue on with that file open, I typically like to close the file, but you can go to the File drop down,

Or I typically still go to the drop down up top and say I want a new company files, let’s select and add a new company file, this will just be a test file for us to set up the bank fees. Now I got this wide screen, because I’m in a two screens. And so it tries to tries to span it over the two screens. But in any case, we have for myself,

I’m the admin or for someone else, if you select for myself here, it will typically populate your information generally from your Intuit information, which is the owner of QuickBooks that they have on file, I’m going to pick someone else so that it will not populate that information. And I can just populate it myself with some mock information. So we’ll choose the second option.

Remember, down here, you got the other options, which include exist, open existing file, which you could obviously do without going into this area, convert the quick end data or convert other accounting software data. So if you had some other accounting system prior to this, and you wanted to try to convert, bring that information into the system, you can attempt to use those methods, we’re going to just start a nice clean new company file. So we’re going to start one up, here’s the name,

QuickBooks is going to try to help us up with a list of accounts on the right hand side. So obviously, if I have inventory, I want to choose something with inventory, you could try to get more precise on these types of accounts. The desktop version does a pretty nice job because they actually customize a lot more than the online version for your chart of accounts to give you that Default Chart of Accounts.

Otherwise, it’s often a good idea to choose the Chart of Accounts that’s applicable to you. And then make modifications along the way, meaning you use the account names that are applicable, if you don’t like the name, you change the name. And then if the name is not there, you create another account for it.

So this would be the type of entity that you have set up under notice that the normal bookkeeping process is going to be in essence the same for all of these the major differences is going to be in the equity side of things so proprietorship having one equity account owner’s equity partners equity capital, or just capital partnership, having two equity accounts for the two partners generally that you’ll have to deal with single member LLC, similar kind of setup.

And that might be different than a sole proprietorship, even though you have a single member if you’re using the tax line items. But in my experience, there’s not many people that do that to try to convert the the software all to the tax software like automatically, which could be you know, I’ve tried it, it’s not, it works pretty good.

And then the e i n number, if you have the e i n number would be applicable here. I’m going to say 951234567. I think that’s right. And then phone number, we’ll say 555. To do. DEP and then the address, we’re going to put a mock address here, which is going to be 106 North Roxbury drive, Beverly Hills, hills, Calif, California.

And then this is 90210. I just made this address of this house is for sale, it’s $45 million Kilson case you’re in the market in California. I don’t know who would pay for that these days for a home in California anyway, create the company file. And there it is, and they try to upsell us on a couple things get paid faster, blah, blah, order checks, and whatnot. So I’m just going to close that out.

No, thank you QuickBooks. And then we’ll This is our homepage that is open the chart of accounts that has been populated for us. If we go to the lists drop down Chart of Accounts, then we didn’t select any industry. So they gave us just like the bare minimum accounts, they gave us a payroll account, they gave us the opening balance and the draws and the equity and the payroll account down below.

And you might ask, Well, where did you put the file QuickBooks, it would be nice. If you told me like where you put the file, there’s a couple of ways to find it. What I often do is I just closed it out here I go to, I go to let’s close this thing, close the company, and then it puts it in that open window area as the last company that I had open, right here. It’s gonna say, Hey, here’s your list of stuff.

And then I hover over it, and I take a screenshot, screenshot clip it snippet. And so there is where it is. And then I’ll often just put that on, say a word doc. So I can now find it say what in the world did you do quick, it’d be nice. If you ask me, just where to put it would be nice, but whatever. Second part it put it where I had my last company file. So it’s like, Hey, you put your last company file here, you probably want to put it there. So you could follow the the list of items here to kind of find it, and then I’ll move it now moving, it’s going to be nice and easy.

Because I closed it you have to have the file closed. Notice the software’s not closed, but the file is closed. So I can then cut and paste or move the company file if I can find it. So I’m going to say all right, where did you put it QuickBooks? I really wish you’d ask me before you do these things.

And then I think they put it into it’s in the second part of the course here. And then that I think they put it into data files, most data files over here. So here we go. And we’re looking for The big fee. So there’s the bank feed, notice all this junk get put in there with it, I don’t think you need that stuff I like I’m kind of scared to delete it oftentimes. But you can see how cluttered a folder gets when I only got a few files in here indicates I’m just going to cut that thing,

I’m going to Ctrl X or right click and cut it, cut it out, so I can move it to where I want it to go. Going back over here, we’re going to go back here. And then I want to go into my bank feeds and put it into this data file. And then I’m going to paste it right there. So there it is, see it’s still made its own junk over here, even though I didn’t copy the junk before, but whatever.

That’s why I put it in its own folder. So you can have that junk hanging out. If you’d like to take that suitcase of junk with you all everywhere you go data file, that’s okay. So there it is. And then we’ve got our software here. This is the data file that we have that if you hover over the properties, you can see it’s a QuickBooks company file as opposed to a backup file a QB W file, as opposed to a QB B file.

Okay, now I’m gonna, whoops, I try to open it. I want to I want to open this by let’s do with this wav file drop down and open or restore. And I just want to open the company file, which is now in a new location. So QuickBooks doesn’t know where it is because I moved it because I didn’t like where it put it the last time.

So then we’re gonna go in here and we’re gonna go it’s in the bank feeds data file, right? They’re opening that back up. This action requires Windows permission, okay? I’ll give it permission. You can do it, QuickBooks I, I will give you permission, then it wants a password. Now that we’re opening it back up again. So the password super secret password, okay, I’ve put in a super secret password. I’m not even going to tell you what it is. No one knows.

No one’s ever gonna know except me, this mine slocked. In this mind, QuickBooks knows, but they’re not going to tell anyone. They won’t tell anyone. Any case. Then if I go in here, and I say so now we’re back in our file, so we can just close this out and open it back up.

Once again, if I go to the list drop down and our chart of accounts, there’s our chart of accounts. What we want to do next is to set up our banking accounts or checking accounts and then set up our bank feed information connecting them to the bank and then and then we will set up the the transactions for the bank and then add those transactions into the system. So that’s what we’ll be doing in future presentations.