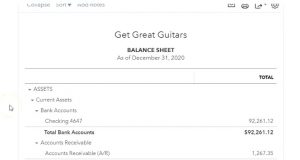 I just want to mention at this point in time, if you have something in like a CD or savings account that’s paying interest that will become due at a later point in time, then it could be the case that that if you have the same bank that you’re working with the packages roll over into your checking account, you can have it roll over possibly at the term or maturity of that particular investment. If you think All that then to happen, you’d have a similar situation that you may not even know about until you actually look at your bank statement.

You’re like, hey, there’s a deposit of, you know, whatever the deposit is, and you’re going to say what’s great, but where did it come from? And then you’re going to look on your on your assets and say, Oh, this investment probably became do right, it automatically matured, and then went into the rolled into the checking account. And you’ll have a similar kind of transaction there, the deposit will be for higher than the investment amount. Why? Because you had a gain, in that case, interest income. In this case, we’re going to say it’s basically capital gain, we sold stocks, okay. So that’s going to be our transaction. So again, this isn’t like a normal type of transaction, because we don’t sell.

This isn’t what we do for our normal type of business operations. This is something that we put money, we had excess money, we put it into an investment, and now we’re now we’re going to be selling that investment. It’s not something we do all the time. And therefore it’s not. There’s no form that we really think of that would be in our normal business cycle for this for this transition. However, we are dealing with cash and cash is going up. Therefore, the form that we would think about would be the deposit form. So we could use a register to enter this into the register like the checking account register. 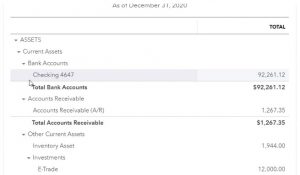 So we’re going to record a deposit. So here is our checking accounts can be going into the checking account, we’re going to put this in there as of Oh 206 to zero, so it’s going to be February 6 that we want to put this in there as of these deposits up top have to do with items that are in the undeposited funds from sales receipts or receive payments. That’s not what we want. We’re going to leave Those alone, we’re going to go down below to this item which says add funds to this deposit. Going to select the drop down for that. This is where we can basically add the accounts that we need to account. So we have received from we received it from each raid. So each raid. So if I say e trade, there it is. And then the account that we’re going to have is also called e trade we put in if we go back to the balance sheet, we put it under the sub account of investments, and then he trade.

So I’m going to say all right, it’s going to go into each trade here. Each trade I think I put a dash or E trade. So there it is, it’s the subaccount of investments, that’s the one we want. So in notice what it puts up top because it’s a sub account. It puts the parent account investments and then the sub account of each trade. Then we can have descriptions sale of invest meant. We’re going to say it’s an electronic transfer, and we’re going to go to the amount which is going to be at to pick up the amount of But the 12,000 here now we’re saying we got 17,000. But we have to reduce this amount by the 12. What’s in it? So I’m going to reduce this by 12,000.

And then we’re gonna have the other account. Well, what’s the difference? It’s gonna have to be some kind of income account some type of gain. So there’s got to be a gain on investment. Let’s see if there’s going to be anything in QuickBooks related to a gain on investment. I don’t need a Fender, I’m going to select over here, gain on investment, it would have to be some income or other type of income account on applied cash uncategorized income. So it doesn’t look like there’s one appropriate for us there. So I’m going to call it gain on on invest meant so well, something like that. And actually, they and we’ll add that now we need to choose the account type. 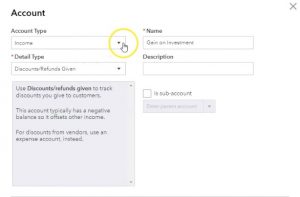 Now it is kind of it is like income that we have here because income is going to be going up but it’s not No, it’s not part of our normal business type of operations. So if We put it into income, it’s going to show up at the top of the income statement. But I’d rather kind of pull this one out, I’d rather say, Hey, you know, this is this is unusual, this isn’t part of my normal operations, I would rather have an income and expense that are in my normal operations. And maybe put this at the bottom of the income statement as kind of unusual income or other operations. So I could see a subtotal for that, I’m going to put it into other income. So I’m going to call it other income because this is not a primary income source. And then you see you have the types of descriptions, I’m going to call this other investment income.

All right, let’s check it out and see what happens. We’re going to say Save and Close. Then let’s first take a look at our trial balance. So if I go to the trial balance, I close the hamburger, I’m going to scroll up a little bit to that 125 is that at the 125. There it is, I thought it was a little small still. So then we’re going to be in the cash. I’m going to go into the cash account, have a checking account, scroll back down, and we should see now notice we’re always going to have this one to 28 there that kind of kind of bugging us because I did I did a transaction at the beginning of the end of the month to see those two loan transactions, so we want the one above it to six. That’s the 17,000 we selected 17,000 That, of course will take us to our deposit. There’s our deposit, closing that back out, going to go back up top, going back up top. And going back to our TB trial balance.

The other side is going to be taking down the the investments we had, here’s our investment in each raid, it still shows the zero even though it is zero because there was activity in this time period that we are covering. So that’s great because it allows us to see the auto zoom, if I scroll back down, there’s our deposit, only 12,000 of it being applied here, taking down the asset down to zero. Scrolling back up top, going back to our report. Scrolling back down to the bottom, we’re also going to see the game down here. Here’s the game. And if we go into that we had an increase of the 5000 It wasn’t just an incredible investment for stock market was doing great. And so then I’m going to go back to the balance sheet. Let’s check this on the balance sheet. Same kind of thing.

Obviously the checking in would be going up. So same account here, that’s straightforward. The other side being the investments, I have to refresh, let me refresh here. Going to refresh the screen. Wow, that’s much fresher. Alright, so now if I go back down to cash obviously was affected, the other side being an E trade. So that’s going to be in the investments again, the zero still showing up here, even though it’s it’s down to zero, because of because it’s it’s going to show us the activity due to the date range, we put up top, the difference, then go into the income statement. This is what where we really want to put our time here, if you go to the income statement, and scroll down, close the hamburger over here.

Then at the bottom of the income statement, we’re seeing that game, notice that is income it’s an other income. But this is nice because we get to see the sales information that is really our business sales information, the cost of goods sold and business type of expenses to get a subtotal of basically our net income, from just operations, net operating income and Then we can have our other income down below. And we’re basically telling ourselves and readers saying, Hey, this is kind of not normal, this isn’t going to happen every time period. This is some other investment that we had down here. But we did have that income. And that brings our net loss up to the 133 93. Also note, of course, that we could run the income statement just for the second month, we’re now on month two.

So you might want to say let me check out the interest income statement from Oh, 201-202-0229 to zero to 29 days in this month. There’s it. So there we have it. Yeah. So 29 days, 2020. I knew it. So we’re going to scroll back down, no income yet. For normal income, we’ve got the interest. And then we have this game down here. So we could consider the income statement, what’s going on just for the second month. Remember that the income statement is a timing statement. And therefore you can do that if I did that for the balance sheet. It wouldn’t make a change. Right? If I said too, oh 12020 229 to zero, and I ran that report. And you still have all that all the numbers here are basically all the same, right?

Because the Indian date is the same, the end date isn’t the same. I said 1231. But we haven’t put any data into their past February. So in essence, the indie numbers are the same as at the point in time is the same. Only in the thing you want to keep aware of is if I go down to the equity section, and I look at the net income number, it’s at 133 93, even though I ran the period from just the month of February, right, and if I go back to the prior, the profit and loss, you can say, well, net income isn’t for that period. It’s really should be 4000 404.

Why is it Why is it not reflecting that number? Because really, that that rollover function for for QuickBooks works on a yearly basis because your yearly bit so the rollover really happens at the end of this kind of automatic rollover that QuickBooks does. That generally does is a yearly type of thing so that 133 point nine three is for the year of 2020, even though we ran the report only for the month, so you kind of gotta keep aware of that. If I go back to the p&l, in other words, and I changed the beginning date from a 10120 to 12 to just to 29, it’s fine to 29 It’s fine.

If I go back down, there’s the 133 93. on the balance sheet, there’s the 133 93. So just be aware how this debt income number works. It’s can be useful, but it can also be a little bit confusing. If you try to look at partial periods, like a like a month or something like that. It’s going to roll over basically at the end of the year, not at the end of the month, even if you run the report for a month.