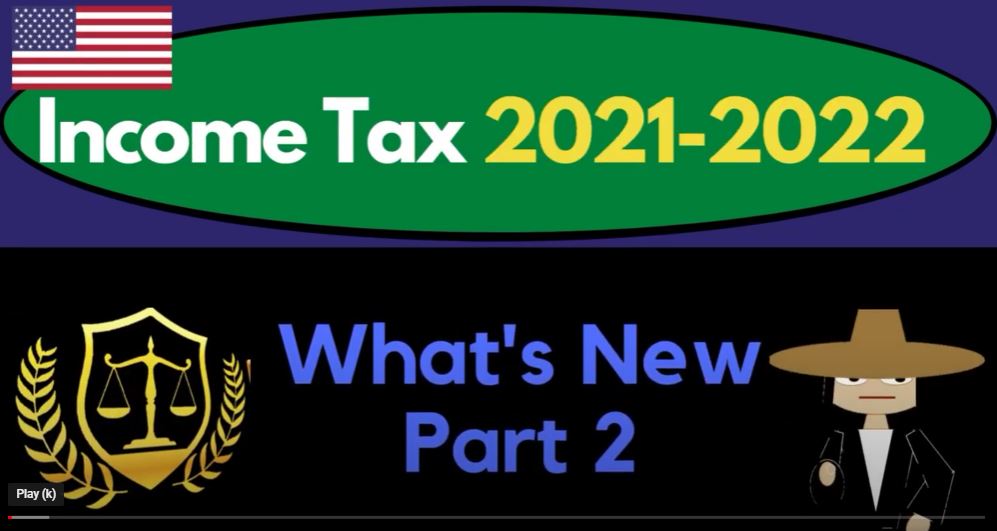 Much of the calculation were on the instructions for the 1040 before but due to those changes and some more complexity possibly they took it out of here and put it on to the schedule 8812 we may discuss those in future presentations. If you are claiming the non refundable Child Tax Credit, refundable Child Tax Credit additional child tax credit or credit for other dependents,

complete schedule 8812 and attach it to form 1040 or 1040 s or so we’re gonna have a supplemental schedule that we’ll fill out that will feed in as we saw when we’re working on will work on a worksheet to kind of solidify those concepts, but it’ll feed into the form 1040 We’ll take a look at that in future presentation.

Premium Tax Credit the PT C premium tax credits, AARP expanded the PTC by eliminating the limitation for taxpayers household income may not exceed 400% of the federal poverty line and generally increases the credit amount. So the premium tax credit has to do with health insurance premiums.

So we’ll talk more about that possibly in future presentations as well. In addition, in 2021, if you receive unemployment compensation, you are generally eligible to claim the PTC premium tax credit if you meet the other requirements. For more information, see publication 974 and form 8962.

So note that this tax credit has a couple conditions, but make it quite complex. So we’ll talk about it in detail in future presentations. But the general idea is that it’s trying to give benefit to people that have lower income to help them out.

But it’s trying not to do what most credits do. And that says instance, which is to disincentivize work, because if your work, then you lose the credits. So they try to actually increase the credit up to some level as your income goes up.

Which means which is going to be an incentive to work is the hope and then it’ll taper back off at some point in time, it’s also going to weave in children involved with it or dependents, which will typically have a benefit from you still have access to the credit at zero dependents, but then you can get up to three and still get added benefits.

So it’s quite complex to kind of calculate, and they’ve made changes here for people without a qualifying child. So that’s what we’re looking at here. We’ll talk more about this credit in detail in future presentation. It is quite complex and interesting to look at all the different scenarios where the but any case,

special rules apply if you are claiming the EIC earned income credit without a qualifying child. And this case is the minimum age has been lowered to age 19. Except for specified students who must be at least age 24 At the end of the year.

So in any case, the age limit has changed. However, the applicable minimum age is lowered further for former foster youth and qualified homeless youth to age 18. So in certain conditions, it can actually be down to 18.

Additionally, you no longer need to be under age 65 to claim the EIC without a qualifying child. So significant changes to the age limitations that were there before tax software will help a lot to help kind of determine these items.

When determining whether you are eligible to claim the EIC earned income credit, even if your qualifying child hasn’t been issued a valid SSN, social security number on or before the due date of your return, including extensions.

So obviously, there’s always kind of this issue as to whether you know, there’s a the the social security number involved with, it can be an issue when we’re talking about qualifying children.

However, when determining the amount of the EIC earned income credit that you are eligible to claim on your return, you should follow the rules that apply to taxpayers who do not have a qualifying child in that instance, then we have the phase out amounts increased, the amount of the credit has been increased and the phase out income limits at which you can claim the credits have been expanded.

So they’re going to adjust the phase outs and the limits basically every year import to basically keep up with basically inflation cost of living changes from year to year.

So that’s somewhat standard, no big difference than what the norm is. In that case. That’s a typical type of change rules for separate spouses. If you are married, but don’t file a joint return,

you may qualify to claim the EIC earned income credit if you live with a qualifying child for more than half the year and either live apart from your spouse for the last six months of 2021 are legally separated according to your state law under a written Separation Agreement, or a decree of separate maintenance and do not live in the same household as your spouse at the end of 2021.

So there’s going to be typically restrictions for the earned income credit for married individuals. In other words, if you were married, and you try to file married, filing separate, the IRS is going to be skeptical that the only reason you’re filing married filing separate is to try to claim something like these refundable credits.

So usually, you don’t have as much access to a refundable credit, if you file married filing separate. So then the question will be well, what what constitutes as a legal kind of separation for us to be able to file to file and get something like their credit.

And that often comes down to like state law requirements in terms of what it means to be legally separated. So you have divorced, which is kind of like similar to like divorce, right? So the whole language in terms of are you married for tax purposes,

or are you not married, and if you’re, if you’re not married, or if you’re legally separated under the state law, then the idea would be, then you might be able to have access, then, to the, to this credit, even though you’d normally if you were married,

you would have to file a joint return, and you’re filing a separate return, which often disqualifies people. We’ll talk more about that in the future. But that’s the general idea, investment income limit increases.

And given the fact that the earned this credit is designed to help people whose income are low, then then they’re saying if this income limit should should, you know, stop people from basically kind of taken the credit if they don’t need the credit,

because they have sufficient income, but they increase that amount to a pretty significant amount $10,000 of dividend. I mean, how much in investment must you have to get $10,000 of interest.

So this is another new thing that they tried to help people out with the earned income tax credit, because you’ll recall that it actually goes up to some degree as your income goes up. And then they have this problem.

They’re saying, Well, what if people couldn’t work in 2021, because of the whole pandemic thing, we don’t want to take away the credit in that case. So we’re going to allow you to take the 2019 income, possibly if it’s higher, which is actually a benefit for this credit, because it or it could be and if it is,

then you might you might be able to take the 2019 income so quite confusing. The game adds a level, it should be beneficial but adds a significant level of confusion to the earned income tax credits.

So we’ll talk more about that in future presentations run some scenarios on it. File schedule EIC form 1040 If you have a qualifying child, if you have at least one child who meets

The conditions to be your qualifying child for purposes of claiming the EIC complete and attach Schedule E IC to your form 1040 or 1040. s are even if that child doesn’t have a valid SSN social security number.

For more information, including how to complete schedule AIC earned income credit, if your qualifying children doesn’t have a valid SSN, social security number, see line 27 A instructions and Schedule E IC. Forgiveness of paycheck protection program the PPP loans, so the PPP loans are kind of thing that they tried to do for the,

the whole pandemic thing is to give possible ability to get access to these PPP loans, which were a big epic thing. And so now of course, we have the tax consequence component of it because they might have forgiven the PPP loan is part of the process would be that you might be able to forgive some of the loan itself, which means it wouldn’t be a loan at that point.

We’ve put kind of like free money. And then the question is, well, is it taxable, if it’s free money, you know, and so on. And so then on down we go, the whole of the rabbit, the rabbit has a bunch of tracks on their holes, so we’re going down the rabbithole were last.

So you want you want to earn income but not be required to put it on as taxable income. So you don’t pay taxes on it would be what they’re saying here.

identity identity verification, the IRS launched and improved identity verification and sign in process that enables more people to securely access and use IRS online tools and applications. And if you tried to get into this before, they tried to put some facial recognition stuff in there, which was just a mess, I couldn’t even get it.

And it just seems like the next step is like camera. I mean, maybe I’m just paranoid. But it seems like once they have all the any case, they were problems with that for me.

And they they took that away now. So you shouldn’t need to go through the whole facial recognition thing to get the account. And the account is going to be something more and more important.

Hopefully the IRS is trying to get better at a better website and a better account access and so on online, similar to a banking situation, which deals with very sensitive information, who which typically have very good online access stuff and we got stuff like PayPal,

and that’s seems fairly secure. So if they can do all that stuff, I would think the IRS could do it without needing your face on file. But any case, to provide verification services the

IRS is using id.me A trusted technology provider. The new process is one more step the IRS is taken to ensure that taxpayer information is provided only to the person who illegally has the right to the data.

Taxpayers using the new mobile friendly verification procedure can gain entry to existing IRS online services such as the Child Tax Credit update portal, online account, get transaction online get an identity protection p i n IP p i n and online payment agreement. So these are things that are becoming more and more important because as the laws are changing,

the pre payments for the child tax credits thing advanced child tax credits, any payments that you make to the IRS would be nice to be able to track and this kind of stuff will be easier to track if you can log into the online portal.

And so I think going forward more people should should just be it should be more it’s going to be more routine I believe or should be because it’ll be easier,

kind of like login into your bank has become additional IRS applications will transition to the new method over the next year. Each online service will also provide information that will instruct taxpayers on the steps they need to follow for access to the service. You can also see ir 2021 two to eight for more information