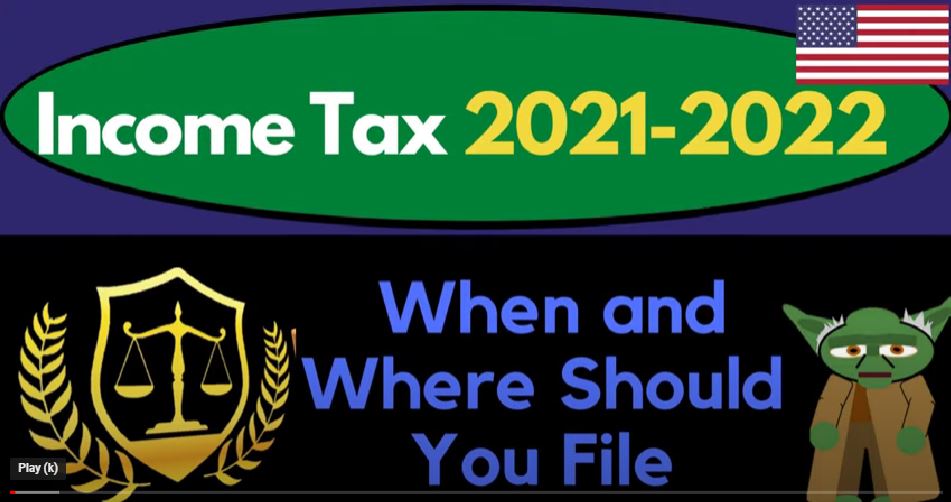 Income Tax 2021 2022. When and where should you file get ready to get refunds to that Max diving into income tax 2021 2022. Most of this information can be found in the form 1040 instructions tax year 2021 found on the IRS website IRS dot govt irs.gov.

often it’s due on April 15. We’ve got April 18, at this point in time, due to some holiday that we’ll see in shortly here. So the due date is April 18, instead of April 15, because of the Emancipation Day holiday and the District of Columbia,

even if you don’t live in the District of Columbia, if you live in Maine or Massachusetts, you have until April 19 2022, because of the Patriots Day holiday in those states, if you file after this date, you may have to pay interest and penalties set see interest and penalty later.

What are the ways we do that if we meet the filing requirements, because if we don’t, they may charge penalties on it. And once they charge penalties, then they’ll accumulate interest on top of it, as well.

So that’s that’s what we’re trying to avoid here. When and where should you file. If you were serving in or in support of the US armed forces in designated combat zone or contingency operation thank you for your service, you may be able to file later see publication three for details.

So if you were in a combat zone, the IRS is gracious enough to to possibly delay the filing requirements. So that’s, you know, you got that going for you. That’s good.

So if you e file your return, there’s no need to mail it. However, if you choose to mail it instead, filing instructions and addresses are at the end of these instructions. So more and more of the IRS is trying to push people towards the E filing, they’ve been doing this for some time.

But after the COVID pandemic type thing that’s going on here, they’re doing it more and more, in part because of the restrictions which are following, I would think more heavily on the IRS, when you’re talking about basically, restrictions for Max masking and any other kind of distancing kind of restrictions.

Those because they’re in the fed the IRS is kind of the first place, they can kind of apply those, at least from a top down fashion. So you would think that the IRS is going to have more problems with those kinds of things. And we know that they are quite backed up on tax returns that are having issues and problems.

So if you send it in a paper return, it’s quite likely that it’s going to take them longer, because they’re going to need actual manual processing for it. They’re trying to get everything basically automated. If you send in every turn, and it has a problem with it, that’s going to take you know,

purse, a manual person instead of an electronic truck process, then that could also take longer for most people that want a refund, that’s going to be bad. So the general rule that they’ve been putting out there for some time now is if you want to get your refund fast, you want to use tax software, you typically want to electronically file, and then you want to have the refund go directly into your bank account with a direct deposit status.

Now, if you owe them money, then you might not be as concerned with them processing as long as you avoid the stick of hitting getting hit with the penalties and interest by still filing on time.

I would think but you know, as long as they don’t charge you penalties and interest, you might not be as concerned. But even on that side of things, it’s kind of nice to be able to E file it because then you can at least say, hey, look, that thing has been processed, I don’t have to worry if it got lost in the mail or whatever, anything like that. So in any case, the chart at the end of these instructions provides the current address for mailing your returns.

So if you want to mail the return and you can take a look at the form 1040 instructions and you’ll find the proper place to mail it, make sure that you’re mailing it to the proper place. Use these addresses for forms 1040 or 1040. s are file 2022. Obviously, if you’re using tax software, then it’s an E file a lot easier of a process.

Remember that even if your if your income is below a certain threshold, you may have access to free software on irs.gov. IRS. Gov. So the address for the returns filed after 2022 may be different see irs.gov forward slash 1040 form 1044 Any updates? What if you can’t file on time?

So the general rule being that you owe the money as you earn the money. In other words, the way the tax system is kind of designed to be would be similar to if you’ve ever worked with payroll taxes, that being that during the tax year, in this case, 2021, as you earn revenue, you actually pay the IRS as you earn it. And then when you file the tax return in 2022, by possibly, or generally April 18, in this case of 2022,

you with this to have an information return telling them this is my earnings. These are the taxes my tax liability, which I already paid during 2021, resulting in no refund, and no tax due. That’s how it’s kind of designed to be.

However, it can’t be that way perfectly, because it’s a very complex tax system. So we cannot know throughout 2021 how much tax we’re actually going to owe because it’s a progressive tax system with massive amounts of different kinds of deductions instead of just one kind of standard deduction.

And you have different complexities with filing statuses, and so on and so forth. That’s why we shoot for kind of a refund, so that we can avoid the stick of penalties and interest.

But you’re still going to need to pay them because simply by delaying the returns, you’re not going to delay the pay date. Because the pay date in essence, they still want to get paid throughout the year.

So you’re going to in most of the times when people can’t file it’s because they don’t know something like they’ve their own business and they don’t have the proper bookkeeping or so on to file for proper schedule C. So they don’t know how much tax they owe. And that becomes a problem to estimate the payment.

But remember, you have to estimate the payment to avoid the stick of the penalties and interest because there’s a difference between the filing requirement and the payment requirement.

you could just basically go on to the IRS website, make the payment that you owe, which will automatically file in essence, the extension, if you don’t owe them money, then you might still file the form 4868 to kind of, you know, make sure that you’re in compliance.

But usually, obviously, if the government owes you money, in other words, when you file a tax return, they’re gonna give you a refund, and you delay that point, then it’s not a big problem to the IRS,

they don’t care that much because you’re in essence giving them a loan, they are no the time value of money, they’d rather hold on to the money for a longer period of time, and not give it to you until later. And so it’s not as big of a problem. If you owe them money, then it is a problem. They want their money up front you got to make a payment and so on.

So an automatic six month extension to file doesn’t exist. does it extend the time to pay your tax. If you don’t pay your tax by the original due date of your return, you will owe interest on the unpaid tax and may owe penalties you can see form 4868 For more information as well as the related instructions possibly

What if you can’t file your tax on time. If you are a US citizen or resident alien, you may qualify for an automatic extension of time to file without filing Form 4868 You qualify if on the due date of your return, you meet one of the following conditions.

This extension gives you an extra two months to file and pay the tax but interest will be charged from the original due date of the return on any unpaid tax.

So you got that same kind of difference between the due date and and the due date for the payments. You must include a statement showing that you meet the requirements. If you are still unable to file your tax return by the end of the two month period, you can get an additional four months if no late no later than June 15. So you got that extra two months to kind of do the filing.