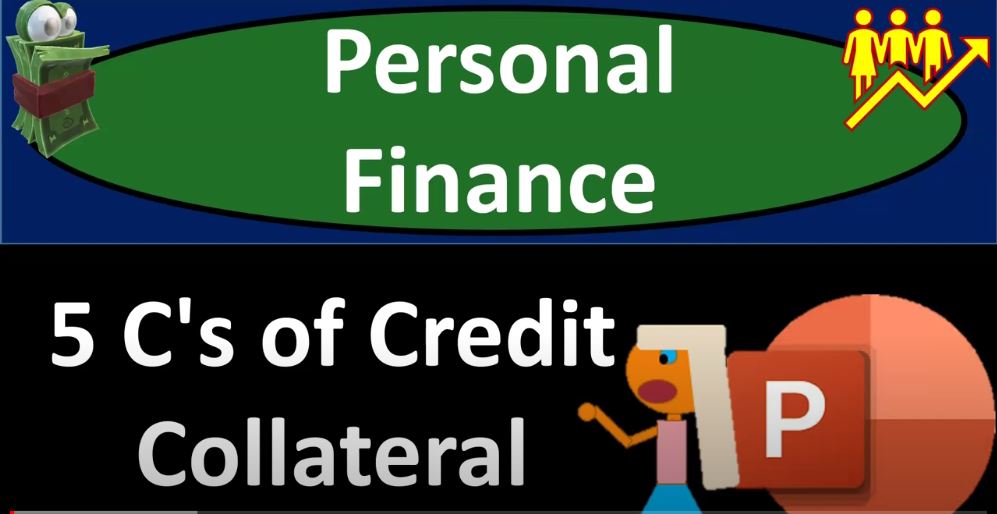 Personal Finance presentation, five C’s of credit collateral, prepare to get financially fit by practicing personal finance. First, we’re going to take a step back and look at the five C’s of credit common things that lenders will be taking a look at when assessing credit common things that we would want to take a look at in order to assess our own credit situation, then we’ll be focusing in on the particular sea of collateral for this particular presentation. In prior presentations, we looked at the seas of credit history and capacity.

This time, we’re taking a look at the sea of collateral and future presentations, we’ll look at the seas of capital and conditions. So collateral What is it? collateral is a personal asset you own such as a car, a savings account, or a home. So these are going to be types of assets, which you’re going to be putting up to support the loan. So in the event that you default on the loan, then the institution the bank, or other lending institution, possibly could go after the collateral to pick up the value recurring or recovering the value of the loan money that they gave to you.

Now, note, when you’re thinking about collateral, typically, you’re thinking about these large types of things, such as a car, such as a home, possibly such as a savings account, why do we need these large types of things, you might be saying, Hey, I got a TV at home, I can use that as collateral, something like that, yeah, might be able to use those types of things as collateral as well, but usually would be at something like a pawn shop with that type of situation, because they would want possession of those type of smaller, movable things, that they can’t basically prove as easily with documentation,

that they have the right to them in the event that you default on paying the loan. If you’re talking about a large thing, such as a car, such as a home, then you typically have documentation to prove that you have signed them over as collateral, for example. And of course, a savings account will typically be something that is at the financial institution.

So collateral why is it important? collateral is important to lenders because it because it offsets the risk they take when they offer you credit. So obviously, if you’re looking for a loan, the bank’s trying to give you money or looking to give you money, you’re going to take that money, you’re going to spend it perhaps on a car, perhaps on a home perhaps on some other thing. And the bank is out the money, why is the bank giving you the money because they want to make the money back plus interest on the money.

Of course, they’re concerned as to whether or not you’ll be able to pay it back in the event, you don’t pay it back, if they have something that they can go after, such as a car, such as a home, such as the savings account, that will of course lower the risk to the bank, lowering the risk to the bank is something you typically want to do. Because the less risk on the banks side of things will typically lend leave them or to charge lower interest rates, they are willing to charge a lower interest rate to get your business if they think you’re likely to repay back or at least be able to secure the loan.

And they want to take your business at that point instead of so you go into some other bank. So using your assets as collateral gives you the gives you more borrowing options, including credit accounts, that may have lower interest rates and better terms. So obviously, again, that’s your goal, your goal is to make it look good to the lender, so that they want to land and so that you get better terms in order to do that. And then you’re more marketable to banks, when when you’re looking better.

And that usually will lead the bank to be offering you better terms. So if you have assets like equity in your home, you could potentially use your home equity as collateral to secure a loan, this may allow you to take advantage of a higher credit limit, better terms and lower rates. Now, obviously the home is one of the primary areas on the personal side of things where people use it as collateral.

Because again, it’s something that the it’s something that’s generally quite stable as opposed to a car which will deteriorate in value depreciate go down in value over the years, fairly rapidly. And of course, it’s large, you can’t move the home, it’s not like you’re gonna up and leave and take your home with you generally. Right. And it’s, it’s something that they can have documentation of as to who has ownership and who has, you know, pledged it as collateral and so on, and so forth.

Also, it’s it’s thought that the home could most likely go up in value over time, which could be which could be good as well. Now, as the home goes up in value. That could mean that you have more what they call equity Home Equity, that would mean that That’s the difference between in essence, your value of the home and your current loan balance. And so if if you have more value in the home, then you have financed against it, then you might be able to use the home as a way to to support further financing.

Obviously, you still you want to be careful with with that because of course, the downside of it would be that if you don’t pay the the the payments then the home is on the line in those instances. So but remember, when you use an asset as collateral, the lender may have the right to repossess it if the loan is not paid back. And that’s of course the point that if you don’t pay back the loan, then the collateral that you put up would then be in jeopardy at that point in time.