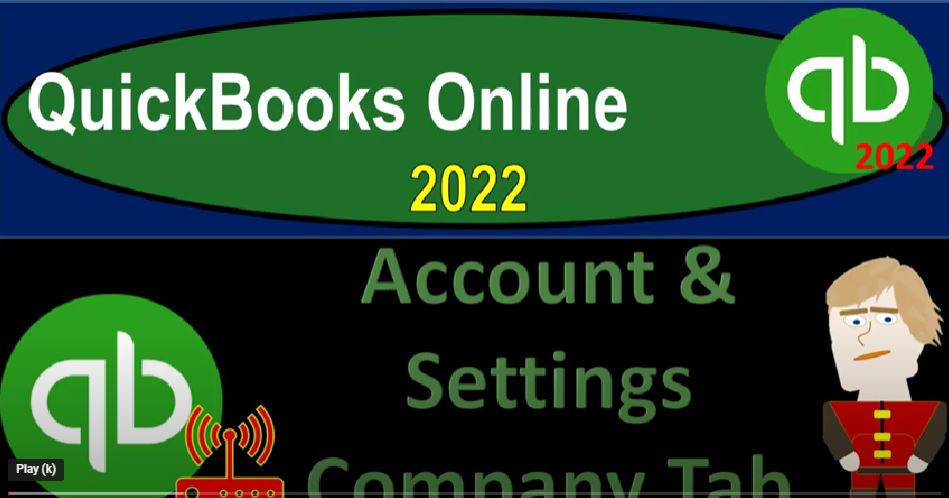 QuickBooks Online 2022 Account and Settings Company tab, get ready because it’s go time with QuickBooks Online 2022. Here we are in our get great guitars a practice file that we set up by using the free 30 day trial period, get a hold ctrl scroll up just a bit to get to that one to 5%. If you watched the navigation course, remember that we have a couple key navigation items, I just want to recap real quick one is that you can zoom into the screen by holding CTRL down and scrolling in or out.

You need to be careful with that, however, because it will adjust the size of the screen as the website will adjust the size of the screen. The other is that you can duplicate the tabs up top by right clicking on the tab and duplicating the tab. So you can have for example reports on one side your data input on the other side. Be careful with that because you’re going to need to refresh the screens in order to have the changes from one tab, go to the next tab we will be practicing that a lot.

So we will get an idea of it closing that second tab back out. Also want to note that they’re experimenting I would call it basically a B testing with this different look on the left hand side, which they’re calling the Business View, which has these nice little icons and less formal language, except especially this item here, which I love, they call the get paid and pay tab, which is quite informal.

But then you could go to the other the prior kind of the older look, I would say by going to the cogs drop down and switching to the accounting view the accountant view. So I’ll try to toggle back and forth between these two views a bit so that you can get a feel for both of them.

And and you can then be working with whatever you think is best you can work hopefully with other people if they like the other view, as well. And you can also if they just change to the new view or they go back to the old view which they can do at any point in time because I would say they’re basically a B testing,

which one is going to be more popular, then you can be okay with either method they go remember, with the quickbooks online software, they will change things like that you have no control over it, the functionality should still be there, it’s just that where you’re going to find it and how it’s going to look will be a little bit different.

So I’m going to go back to go to the cog up. Top and turn a switch back to the Business View. To take a look at that I would think that this view also they they looked at it and designed it possibly for use on tablets, and phones.

And so possibly this is more optimized for that type of usage, which more and more people are using as well. So I’ll try to take a look at it and toggle back and forth a bit, we might jump also back on over to the sample company file just to take a look at the accounting view, which might be a little bit faster.

So it might toggle back and forth between the two. Okay, that said, we’re now going to go through the setup process. There’s nothing in this company file we’re starting from scratch, we now want to think about the set up or the options on the setup options that we kind of went through when we set up the free 30 day trial. But you can also kind of adjust them or adjust your settings.

And most of those items are in this cog item up to the right. So your major functionality to change things is going to be if it’s a day to day transaction, the New button on the left, or is your items on the left hand toolbar, which I would think of as centers for your major cycles, the revenue cycle, the sales cycle or purchases outside the revenue cycle, sales cycle, accounts receivable cycle, same name for the three things, then your vendor cycle or your expenses cycle, your employee cycle, and so on.

So now just to recap them, they’ve got the general categories within the company area of company name, company type, contact information, address, address, address, and communications with Intuit. So let’s go back up top and look at a few of them you can hit the pencil up top which represents the editing but really, you can click anywhere in the middle here and that’ll go into it.

So you got your editing, you might want to add a logo so the logo might be something that would be applied to some of the the types of forms that you give to other people, such as an invoice for example, possibly an estimate.

So we can add hit the little plus button in the logo. I haven’t optimized any logo here but just to show you how you can pick one up you can of course search for something on your computer for your logo, I’ve got this little Let’s, let’s choose this one, we’ll choose this one, your feedback is is used is helpful. So we’ll do that one and save that here.

So there’s our, there’s our logo. And then we’ve got the company name shown on sales forms and purchase orders. So for the practice company, I’m going to type in get great guitars.

because you’re a sole proprietor or something like that, then you could type in ei n number up here, and you can search for how to apply and you could typically apply online, it’s pretty easy process.

So if I close that back out, this isn’t a required field, by the way. So also, if you’re not basically using external reporting for taxes or anything like that, you’re just doing your bookkeeping, you could do so without entering anything in here. But I’m going to put nine, nine and 123456. Let’s do that, then 1234567.

And that’s obviously a made up number. So let’s go ahead and save that. And so there we have it. And then we’ve got the company type. So let’s go into this one represented by the little pencil, but I can just click anywhere in here. So the tax form is the sole proprietorship.

So this change in this might not have an impact basically on the look and feel so much of the reports. In other words, if you were to change a sole proprietorship, you would think the equity accounts on the on the general ledger would be would be something that would apply to a sole proprietor like a capital account, or an owner’s equity partnership would have equity accounts, and so forth and so on.

But I don’t think when we set it up that that that that was changed or that deferred. So in any case, this you might want to set up of course, the sole proprietor means your one business owner typically might filing on a schedule C, the partnership would mean that you have two or more partners.

And typically for taxes, you’d be filing a Form 1065. And then having a flow through of that, to the 1040s of the partners as small business corporation, they form 1120 S S corporation would be another type of flow through type of entity that’s supposed to get the best of both worlds of a company.

And a sole proprietorship with the flow through Corporation. 1120 would be a normal Corporation, which has its own legal entity and doesn’t have the flow through the nonprofit if it’s a nonprofit organization, Limited Liability Company kind of acts like a partnership, but now you’re limited liability, although it’s possible to be a single member limited liability and other so I’m just gonna use the sole proprietor here, and we’ll save that and then the contact information contact information down below.

This information could be useful because again, you might choose to have it on your forms that you’re given to clients and customers like invoices as well as vendors, and things like the purchase order. So I’m going to go ahead and save that. And so then we’ve got the company address. So address where the company is based,

I would like to choose a Beverly Hills 90210 address here, even though no one like remembers that show at all anymore. So it doesn’t make any sense anyone but any case 1404 done Ridge Drive, Beverly Hills, California 90210. It’s currently selling for about 8 million if you’re in the marketplace. So let’s go and pick that one. That’s the one I want. That’s where we’re located. That’s where we’re located.

So that’s the company address. And then this address, let’s go to this one, it’s going to be the same, that looks good and same. So I’m just going to keep that the same going across and communicate with your marketing. If you go into that it’s going to help you to basically manage you get another website trying to manage the different kinds of products that you might have, with the same the same software.

So that’s going to be that item. So that’s the general overview of the company information. If I close this back out, remember the place we were just located was in the cog up top.

And if we were to enter forms that were going to be given to some someone outside of the company such as the invoices, such as possibly the estimates, such as the purchase orders, then some of that information that we populated there for the contact information and the logo and so on could help to kind of customize those forms.