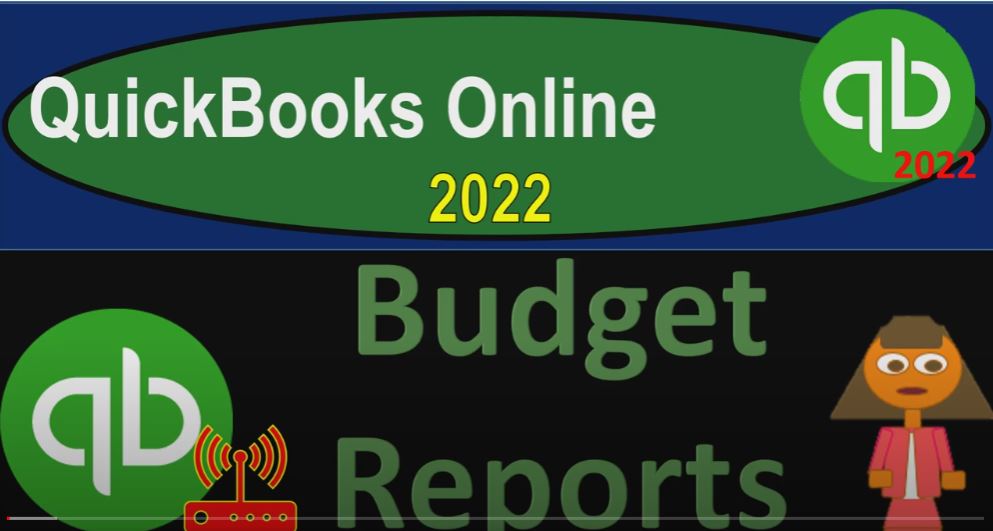 We’re also going to have the free 30 day trial version open just so we can compare the Business View and the accounting view. If you don’t have access to this app, this time, that’s okay, we’re just using it for a reference. Going back then to the sample company. And we’re then going to open a few tabs by right clicking on the tab up top and duplicating it back to the tab to the left. Let’s do it again.

we’re gonna open up our favorite to the balance sheet the profit and loss and scroll up and do the good old range change on them from a 101 to one to 1231 to one and run it. Closing up burger going to the tab to the right doing it again by going to the reports down at the bottom this time the P and L the profit and loss Income Statement going up top and ranging the changing Oh 101 to one to 1231 to one, run it Poor five or and then closing the hamburger.

Now we’re going to be looking at the budget type of reports remembering that the budget is a little bit different than any other kind of report because that’s going to be a forecast into the future. So just realize that when we’re thinking about the budget, when you’re looking at the normal accounting process, the budget isn’t really something that kind of falls into the normal accounting in the definition of taking prior transactions and using them to construct financial statements.

The budget then is going to take the financial statements and make future projections based on past data as well as future information. Therefore the budget kind of takes into consideration multiple areas, right, you’ve got the accounting area, which is the prior data that we’re going to be using and the construction of the budget, we’ll be using accounting.

And then we’ve got kind of like corporate finance or decision making or managerial accounting, you could call it type of topics, which means we’re going to take that past data and make estimates or projections into the future, which is which is typically kind of different than like normal or standard, like bookkeeping type of accounting, because that means we’re actually looking into the future to make decisions on the data from the past.

And then you could crossover with like economics and so on, which means we’re gonna take into consideration market data and whatnot as we make the projections into the future. So on the accounting side of things, if you’re doing the accounting, you’re thinking I’m my primary job generally within QuickBooks is to enter data of prior transactions to make the financial statements on which the management can then make future decisions and use it to comply with any kind of things they got to comply with, such as taxes and reporting needs.

And then then go into like your put your next hat on your other hat on, which would be managerial accounting, corporate finance kind of accounting in and you know, economics and whatnot, and try to think about that past date and how you can project it into the future.

Now, that also means that you would typically do that not in the QuickBooks system. In other words, I’m not going to construct the budget just within QuickBooks, what we’ll typically do is export the data from say, a Profit and Loss report the Performance Report, which is the first thing you would think about, although you could do the balance sheet too, and think about budgeting out the balance sheet,

but the performance report is the profit and loss and then performed your estimates possibly in something like Excel, your projections out into the future. Once you have those projections, then I would put them back into the QuickBooks system. And that’s where the bookkeeping falls into play with the accounting of the budget, because then we got to account for the numbers that we’re forecasting into the future,

putting them back into the system, so that we can run comparative reports meaning I would like what QuickBooks does well with a budget is run comparative reports what actually happens versus the budget so we can do the comparison Since and track what we’re doing in the future, okay, so that said, if I go to the right tab over here and go down to the reports, I don’t think we have anything in the budgets at this time.

So if I type in budgets, they don’t have any budgets, they didn’t set up any budgets. So let’s set up a budget real quick. And then we’ll do this more in the budgeting section. But just let’s put some numbers in just so we can look at these reports, I’m going to go to the first tab to do it, the budget is located up top and the cog up top. And then we’re going to go into the budgeting information here, budget, and then we’re going to apply add a budget, we’re just going to add a budget because they don’t have one.

Again, you would probably want to make the adjustments outside of QuickBooks in something like Excel to, to, to think about what your number should be, and then input them into the system in this way, when you come back here. Now I’m gonna there’s the data that’s on the right hand side, notice that the sample file, they were kind of lazy, in my opinion, you know, they can’t, they only put a few data points starting in September.

And they’ll just do this for some of them, this is a discount, I’ll put this at the negative 50, let’s say and then take that across. And then I’m just looking over here and putting in a reasonable number. So I’m going to say this is the landing services, let’s say 400, tab, and then copy that across, copied across.

And then I’m just going to make it standard all the way across the months just so we can have something to play with here. So you could see some reports, this will be 300, and then copy it across, copied across Roger, Roger that copy out. It froze something, it’s frozen, I fixed it. Don’t worry people, I fixed it. And then this one’s going to be let’s put this one at the 150. And then copy that across. And so there we have that did, I made this one 180. We’ll copy that across, and then this one down here is the total. So that looks pretty good.

So there they are. There’s our there’s our budget overview in the budget versus actual. Now the budget overview is just going to give us you know, an overview of our budget, it’ll look like basically an income statement type of report. And the default is it’s breaking out here by month. So we got the month by month breakout. And then we’ve got the total on the year on the right hand side for the income,

and then the expenses. So we basically have an income statement in essence, which is broken out by month. And if you take a look up top, you got the drop down, it’s going to be the budget that we have put in place here. You could change the range up top. So if I wanted to just see like the end of the year, for example, I could change this to like 10 a one to two and run that one. So now we’ve got the end of the year. Information on the budget for the last three months the last quarter

So the other report that we can take a look at is the budget versus actual, which is a great report. And that’s kind of one of the major reasons that you’d want to put it back into the system. So that when the actual time period goes by, you can compare what actually happened to what was budgeted, and then look at your look at your differences.

So let’s open up the hamburger again, go back down to the reports on down below. And let’s do a budget versus actual budget versus the actual stuff. And the budget is like what we thought was going to happen, and the actual, is what actually happened. So obviously, to run this report and have it make sense, you would have to have the actual timeframe having past so that you have some data inside it,

nothing much in the actual the difference, and the percent of the budget. So we could of course, change the date range here. So we might look at, say, the, let’s say, the first quarter of this time, a 101 to two, maybe you might have some data in that area to let’s say, Oh 331 to two, and then run that one, run that one hold CTRL down, scroll down just a bit. This is obviously a much wider report,

because we do have this comparison information for it. And then of course, we’ve got our totals on the right hand side breaking out the comparisons on a side by side budget versus actual. So again, the general idea for the budgets would be one. Remember that the budgets are something that are kind of added on to the bookkeeping, the bookkeeper, your standard accounting,

bookkeeping job doesn’t really include the budgets, because the budgets represent management, making projections into the future. So when you’re doing normal accounting, you might not be thinking budget, but accounting, bookkeeping, data input and whatnot is involved in the budgeting process.

however, so that then you can do what QuickBooks does well, which is run reports, taking the budget numbers versus the actual numbers, and that’ll give you relevant data that you can make decisions on as time passes.

Obviously, if any of the budgets change, if you want to adjust the budget, you can go back on over here, look at this budget by editing it or you can add you know another budget you can run multiple different budgets