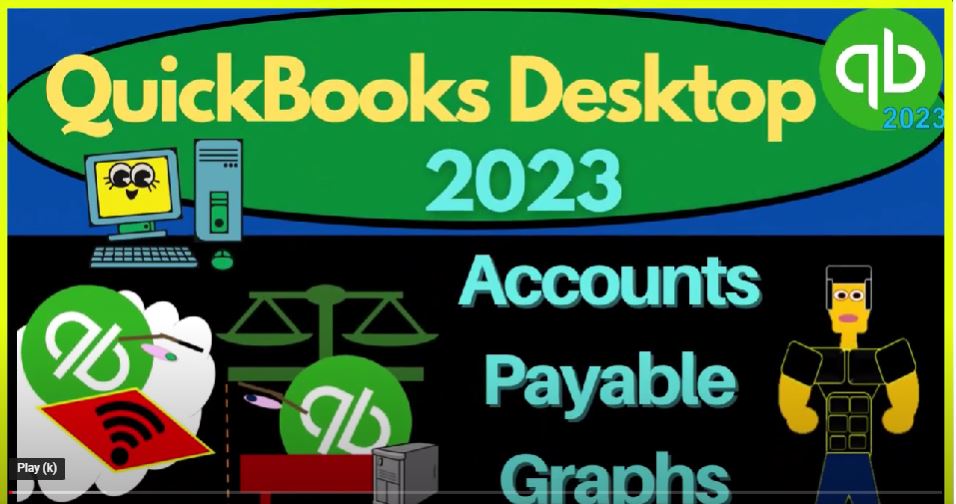 hide icon bar open windows list checked off open windows open on the left hand side reports drop down company and financial p&l Profit Loss Income Statement change in that range in a 10124 to 1230 124. That’s January two set to December 2024. Customize it fonts and numbers to change the font to 12. Okay, guys, please. Okay.

Reports dropped down company and financial this time the balance sheet rock dropped down for the fiscal year 1231 to four customize it so we can get to the font so we can change it on up to 12.

Now we’re going to be looking at the accounts payable graphs, we looked at accounts receivable graphs last time, accounts payable is down here. It is an accrual account there goes up when we enter bills, and then it goes down when we pay the bills off.

So we’re owing vendors, people that are providing us goods and services. And so we’re going to sort that out by a graph, show it pictorially.

So the report that this would be based on then would be if I go to the reports drop down, we go to the vendors and payables. And we’ve got the accounts, vendors Balance Summary, let’s do that one. And so there it is. So now we’ve got let’s customize it, fonts and numbers, changing the font to 12.

So we could see it a bit better, a bit better. So there it is. So now this is who we owe, listed out. And then there’s the total 26 636 92 timeout to the balance sheet.

Or we just like to look at the colorful thing that we can go to the reports drop down, and you can find it and the vendors and payables.

We’ve got our graph right there, you can also find it in the Report Center. Of course, let’s do it that way to maximize the Report Center, because it always unmatched itemizes, which is just annoying, but you know, get over it.

That’s how it works. And then here it is, we’ll run it right there. It’s stupid that it does that though, but whatever. So there it is. So we’ve got this now it looks a lot like the accounts receivable graph that we looked at last time.

But now this is people we owe money to, as opposed to people owing us money. Once again, we’ve got the pie chart down below, which is nice, but it’s quite static.

Once again, it’s got this kind of 3d impact, which I don’t personally like, although it’s kind of a cool effect, because it seems deceptive to me.

Because once again, this blue icon, which was this vendor looks like it’s a lot bigger than it should be when compared to the green one here, which is obviously a lot bigger in reality. So it seems when I see something like that, I think slimy marketers trying to put one try to try to skew my opinion or something.

But maybe that’s just me, maybe I’m a little paranoid. But there is that now if I look at this, and we see how are these calculated, we can go up top and so this is going to be the parry the vendor balance summary.

So this one, let’s pull out a trusty calculator here and just do a calculation with it. That’s what we do with calculators. Do some calculation, pull that thing out.

So we’re gonna say okay, does that tie out here? 25.17 There it is. Now note that if you put this graph because it’s nice and colorful into a presentation and you give it to someone in the month in summary or something, then they might actually ask you what it means.

So you got to have you got to be able to say okay, yeah, that’s my that’s who we owe the money to. That’s the percentage that we owe in comparison basically to the total down here. This report up top represents the aging report.

But you can’t change the colors, you can’t do much more. Other than this, I can’t change the fact that we have 10. Vendors represented what if I want less or more what if I want the pies to be larger by having less vendors and more in this other category or less can’t do much about it, because it is what it is. So it’s a lot more flexible to be able to export this stuff to excel.

Note that if you did want to present this to somebody, you could of course, print it. And you could print it as a PDF file, which to a PDF printer, which could save it as a PDF, which could be useful if you want to group it with other reports.

And then I’m going to take a clipping. And you might just say, well, maybe I just want like the pie chart here. And then maybe you don’t maybe you don’t need the title. So once again, the screen clipping, little formatting, I can go up top and say let’s crop this down to here. Let’s make it a little bit larger.

So something like that. And then you can then of course, you can copy the key over insert. And you can say, let’s put the key in to. So like that.

That’s one way that you can easily kind of put this together in, you know, whatever format, you’re presenting this to somebody. You can copy that over in Excel or something.

If you’re making an Excel worksheet to put all your reports on one report. That’s one easy way to put this pictorial thing in there. Next time though, we’ll we’ll try to take the report,

And so we’ll do that next time because like I say that would be give you way more flexibility to do what you want to customize the colors that you want in the pie chart.

And to customize the look and feel of it to not make it look deceptive with this 3d kind of stuff and so on. Which again, it’s not my I just but you know, it’s kind of cool.