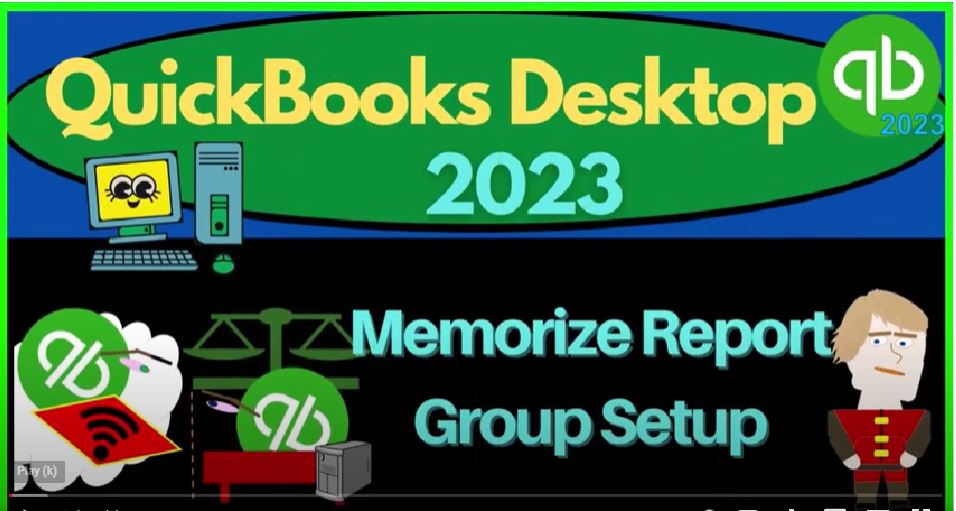 Support accounting instruction by clicking the link below giving you a free month membership to all of the content on our website broken out by category further broken out by course, each course then organized in a logical reasonable fashion,

making it much more easy to find what you need then can be done on a YouTube page. We also include added resources, such as Excel practice problems, PDF files, and more like QuickBooks backup files when applicable.

So once again, click the link below for a free month membership to our website and all the content on it. Can we are in QuickBooks Desktop sample Rockcastle construction provided by QuickBooks

going through the setup process we do every time maximizing the homepage to the gray area view drop down noting that we’ve got the open windows list and hide icon bar checked off. So the open windows are on the left.

And then we’re going to go to the reports drop down company and financial P and L range change a 101 to 412 31 to four tab, customize fonts and numbers changing the font up to 12.

Okay, yes. Okay. Reports. Again, company and financial, again, balance sheet, that’s the new thing. And then we’re gonna go to the drop down and take a look at the fiscal year, and then customize and read fonts and numbers to change it to 12 again, and 12.

And okay, yes, and okay. That’s the setup process that we do every time. Now we’re going to be looking at the memorizing of the reports.

Now notice that this particular report these two reports, we’ve been customizing them every time, we might say, hey, is there a way that I can do a memorization, so I don’t have to do that.

Every time, we could do that we can do the memorized reports up top, let’s make it a little bit more glaring of a change. So we can look at the memorizing report, I’m going to go to the Customize. And let’s say we went to the fonts and numbers and we like we said we want the brackets or parentheses red and remove the pennies.

So now we’ve got the header is in red. So it’s a little ugly. But if that’s what we wanted to do, we could memorize it. To do that, we can go to the icon up top for the memorize, we can change the name if we want balance sheet like custom or with custom or something like that,

we can then say we want to save it to the category. These categories are given to us in part because it’s a sample file where they already set up categories.

This is where our focus is going to be to try to customize the categories here, we can also share the report with others, meaning you might be using the file with other people as well,

I’m not going to save it right now, because we’re going to work on basically these categories that we want to save to. So I’m going to close this back out.

Once you memorize it, if I go to the reports drop down, then it’ll be in this little drop down. But we want to work on the category. So I’m going to go to the Report Center, we’re going to maximize it to the gray area into the memorized categories. We already have this stuff set up in the sample file, I’m going to go to the edit the list. And that shows us this list.

Let’s show that one more time I went there kind of fastest is the Edit, memorized list with a little pencil. And this gives us the categories and the reports that are in each of the categories.

What I’m going to do is clear out the categories so we can think about what we want to put in to this category. So the way you can remove the reports is we can click on the report, you can hit the drop down or rise up down here and say Delete memorized report.

Okay, or you can just right click on the report, right click and delete the memorized report. Okay, I’ll do this for a couple of them. And then and then I’ll just kind of clean them all up so you don’t have to watch me clean them up. But I want to show you the memorizing I’m going to delete everything within it.

I’m going to repeat that process clearing this out so nothing is in the memorized reports to start out with here. Okay, so now everything is cleaned out of there.

So if I went back to a report, for example, and then I was to memorize it. And I was saying in this category, I can’t even get into the categories, because there’s nothing in it at this point in time. So I’m going to close this back out, I’m going to go back into the memorized reports.

And that would be useful if you’re kind of having your own reports versus other people that are using the same software and have access to the reports. Or you might say, this is going to be my for my internal use reports, flows formatted for me to do my data input process as a bookkeeper or accountant, and accountant.

Okay, so there we have it. And then if I went to like my balance sheet, again, and I was to memorize this, I’ve got the balance sheet, maybe I want to put my name after it or something like that to show the difference, and then go to the Save and memorize reports.

And it’s under the category of Robert. So I’m going to say, okay, it takes a picture, which is quite loud if you have the noise on, and then you can go to the Report List.

And there we have our category in our report under it, I can then close this out, and I can go into the reports drop down, I could find it that way. I can also go back into the reports.

And I wanted to show if I go into the memorized reports this way, now it should have updated. So you might have to toggle back and forth for it to update to the new category, which all we have is that one. Now let’s go to the edit. Again.

Another way you might want to think about reports is to say maybe I want to have a category of reports that are going to be, say client client month end reports.

And that way, I can customize reports in such a way like the balance sheet here and do it. So it’s going to be what I want when I make my month end reports. And that way, you could have someone do your bookkeeping.

And hopefully at the end of the month, they can kind of group your reports together by just simply printing out the memorized reports that are in the month end reports so that they can then batch those and provide them to the client or supervisor or whatever, at the end of the month quite easily. You might have some different reports, although most likely similar for year end reports.

And so you might have similar reports like a balance sheet income statement, formatted, possibly without pennies and that kind of stuff. But you might also have different comparative reports for a year end report, as opposed to the month end report.

And so we could say okay, and those are going to be the reports that possibly I format such as there’s profit and loss for internal use, meaning I just made the font size larger, and that’s it.

So or, you know, whatever I want, um, for my internal use, as opposed to what I want for reporting purposes at the end, oftentimes for internal use, I like seeing the pennies, right.

And I want to see the whole thing typically. And for external use possibly I can clean that out. Because I don’t want it there possibly I’m okay with a Profit and Loss report, possibly when I give it to someone else,

I want to change the title to like an income statement. If I think that’s more professional, possibly I like to use one font internally.

That’s one way you might think about how to organize the reports. And then you could have a separate reports for like payroll reports.

If you run payroll, then you’re going to be given payroll reports to your client It’s on a monthly or yearly basis, and so on, so forth. So you can have that kind of information. Now we’ll start to populate some of these and we’ll work on memorizing some of the reports in future presentations.

But for here, we just want to consider those categories. Obviously, once you have the categories set up, you can memorize those categories and start to organize them in any way you want by simply going to memorize, and then I’m going to say,

let’s say for place a hold on a sec, I’m gonna say memorize and say New, and then we can then have our dropdowns and put them into whatever category we want to be putting them into. So that’s the general idea.