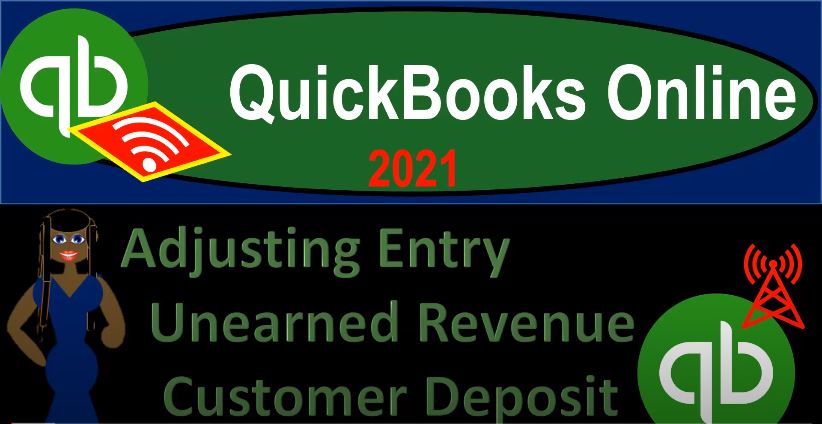 Next tab on over to the left, we’re gonna do this again go into the reports on the left hand side, opening up the P and L the profit and loss otherwise known as the income statement, range change indeed, at oh two to eight to one, run it, close the burger. And then we’re going to go down to the next tab to the left and now open up the balance sheet by going to the reports on the left hand side, opening up the balance sheet the BMS balance sheet, going on up top and changing the date ending at o two to eight to one. And running that report closing up the hamburger, we’re going to be dealing with a customer deposit, we took a look at it in Excel last time and went over basically the theory behind it. So we’re not going to go into that in detail.

We have a little bit different of a situation here, one that you’ll often find in practice, because on top of the issue of just reporting the accounts correctly, we also have the issue of managing the payments and connecting them to basically invoices and whatnot. And the easiest way to do that is to actually use the accounts receivable account because the accounts receivable account is the one that has the connected sub ledgers related to it, that helps us to tie everything out. If we have a liability account, then we don’t have that same connectability.

That same sub ledger. Therefore, many times companies will basically record customer deposits with a negative receivable instead of a positive liability, so that they can track that deposit in the accounts receivable, which has the functionality to do so with the sub ledgers. So that’s what we have here, let’s just take a look at that in a little bit more detail. Here’s the accounts receivable it is of course positive, meaning people owe us money within it.

But if we drill down on the detail of it, by customer, we’re looking for those deposit those negative amounts payments that have been received, for which we have not, we have not happy we don’t have an invoice or anything like that. Okay, so we’re gonna go to the tab to the right. To do this, I’m going to right click on it, we’re going to duplicate this tab, open up another tab, this time customer balance detail will be the report that will run in this tab. So we’re going to go to the reports on the left hand side to do so. And then we’ll scroll on down scroll on down to like who owes you money area that’s right here who owes you money area.

Run it and then we can kind of double check that we’re everything is in balance by going to the bottom here and saying okay, is that 13 872 that should tie out then if I go to the balance sheet to the 13 872 here, the fact that we can tie those two things out the fact that we have a sub ledger breaking this information out by customer is the reason that when dealing with customers, we would like to put things through the accounts receivable account so that we have these reports in order to help out with it. So down here on string music here’s the unusual one.

However, now that we’re at period end, and we have not yet issued the invoice, then we’re going to what we would want to do periodically at the end of the month or a year to present our financial statements correctly is to increase the receivable here and record the other side to the liability like something like unearned revenue. So if I go back to excel, we could see we did that over here with a journal entry. So this is the journal entry that it would look like we debit the accounts receivable, we credit unearned revenue, here’s the accounts that are affected by that.

And then we’re going to have to do a reversing entry to remove it, this one will result in FIFO back to our ledger over here, it’ll result in two more transactions down here, which will net each other out after they both been recorded. So it gives us but it can kind of confuse the bookkeeper a little bit, right. So it should just go in and out. Not a problem, because we’ll be back to where we started at. But you’ve got those two kind of things that will be taking place in in the customer balance detailed report.

So I’m going to then say so I’ll just test that out. And then I’ll add the customer name. But then the other side is going to then go to earned revenue. So sometimes if you’re doing if you’re doing bookkeeping, and you’ve never had this adjusting entry before, you might have to add unearned revenue if you do it’s a liability account and other current liability type of account. So you don’t need any name here. I’m going to try to save it and close it and see if it lets me do so or if it says hey, you need a customer. So I’m going to say save it and it says hey, you need a customer.

I’m paraphrasing here, it really says something’s not correct quite quite right. When you use accounts receivable you must use a customer in the Name field. So we’re going to go Alright, I’ll put a customer in the Name field so I’m going to pick the customer that was affected which was string music, string music, I believe Let me just double check that it’s in the sub ledger over here. We’re going down here to string music. That’s the one. That’s the one. Notice, we don’t really need the customer for our financial statement purposes.

This is an internal thing that QuickBooks is trying to set, QuickBooks is just basically saying, hey, look, if you let me post to the accounts receivable account without a customer, your sub ledger is going to be off. And that usually messes people up. So I’m not even going to let you do it, I’m not even going to let you do it. So we’re gonna say, all right, QuickBooks, that’s probably a good idea. I don’t want to mess up the sub ledger. So then we’ll enter that in and that was check it out. So if we go then to the balance sheet, run the report, again, to freshen it up.

Note, though, that this adds this added level because this thing is gonna if you if you were to give this to some the accounting department, then they’re gonna be like, what is what is this journal entry, that is increasing my accounts receivable, that’s, that shouldn’t happen, only invoices should be an increase in accounts receivable. And we’re gonna say that’s okay, because we’re gonna do a reversing entry, like as of March 1, and it’ll net each other out.

So back to the balance sheet, the other side then is down here in the unearned revenue account that we set up there’s the 300. So now we have the positive liability, instead of a negative receivable. So that’s what we’re looking for. We didn’t do anything with this one to the income statement. So if I go to the income statement and and run it, nothing, no change has happened here, because and that’s different than like a book, a normal book, book problem. If you’re doing an accounting course on unearned revenue that’s different than what you’re adjusting entry you would do for unearned revenue in a book problem.

Because remember, in a book problem, you would have the unearned revenue here and you would be determining how much of that unearned revenue has been earned, decreasing the unearned revenue and recording the revenue that had been earned. That’s not our problem here. Our problem here is just categorizing it between a negative asset for logistical purposes versus a liability. And then periodically making the adjustments so that we can report our financial statements more clearly and more properly as of the cutoff date. So that’s going to be that no change then to the profit and loss.

Let’s take a look at the one more one more thing on the balance sheet. Let’s just tie it out to our Excel worksheet on our Excel worksheet, we should have that 14172 here. So we should have the 14172. That looks right. And then the 300 down here in unearned revenue, which is of course what we just looked at. So let me just check it twice, two times. All right, then let’s go to the trial balance. And let’s run the trial balance here. And this is where we stand at this point in time. So you can you can check your numbers with the trial balance. We’ll also be printing this out if we remember to do so so you can check your numbers on your own time as well.