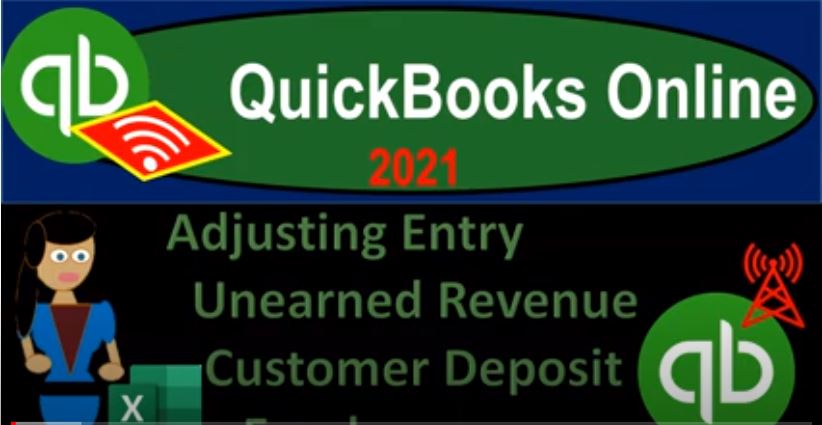 00:31
Once again, we’ll then go to the reports on the left hand side, we’re going to start off with a good old income statement, the P and L the profit and loss range, change it up top ending at the oh two to eight to one, run that report going to hold down Control, scroll on up just a bit to get to that one to 5% close up the hamburger and then go to the tab to the left. This time we’re gonna go to the reports down below open up our other report that favorite report that being the BS balance sheet, report going back on up top Indian date range, oh 22821. tab, run, close up the burger.

01:41
To do that you don’t need the desktop version to follow along, we’re just looking at the flowchart to consider how unearned revenue comes about and then how we can treat unearned revenue so that we can then talk about how we could do the adjustments at the end of the period either end of the month or the end of the year. So normally, if we’re looking at this flowchart for our revenue generation, normally we collect revenue either at the point in time when we issue the invoice, meaning we did the work, but we didn’t get paid yet, or at the point in time that we did the work and we got paid at the same point in time.

02:11
Meaning usually for most businesses, we do the work either before or at the same point in time that we get paid using either a create invoice or sales receipt, if we’re going through the QuickBooks system to do so. However, sometimes we have a situation where we get paid before we do any work.

02:30
And that’s where you have the situation of this unearned revenue. It’s usually applicable to a certain type of industry, there’s some industries where you always get paid before you do the work, such as a newspaper, company, magazine company, computer applications, these days are often getting paid for services that they’re going to be providing in this in the future. And in that case, then again, you got the money before you did the work in a revenue recognition principle system, then you shouldn’t be recording the revenue until you do the work.

02:57
Because until you do the work, then you either owe the money back or you owe them the work, whatever you’ve been promised to do at that point in time. So that’s kind of the scenario that the classic scenario is like a newspaper. But I think the more current scenario would be computer applications. So they’re obviously they’re oftentimes on a service base.

03:16
So if you’re in a service based computer application and your classical kind of book problem for unearned revenue, what would happen is, every time you collect money from a customer, you would put it into you debit cash or increased cash, the other side shouldn’t go to revenue, because you haven’t yet earned it yet, because you didn’t provide the computer service yet, you promised them a year worth of service. So you’re going to put it into a liability called unearned revenue. And then at the end of each month, you would then need to determine how much of the work that you have done, how much of their subscription Have you provided the software for them, and thereby determine how much revenue you had earned.

03:51
And then you’d have to decrease the liability account, record the other side then to the revenue. So you can also have situations where businesses don’t have unearned revenue all the time with every sale, but periodically, they have to deal with it. For example, rental companies typically will collect a security deposit or something like that, which is a similar situation, you got money, but you didn’t do anything for it.

04:15
So you’d have to debit cash or increase cash, the other side shouldn’t go to revenue, it should go to a liability of a security deposit, which is basically kind of like an unearned revenue or similar treatment to unearned revenue, you might get the last month of rent. or in our case, we have a situation where someone comes in and asks or wants to buy something that’s valuable, like a guitar, and we don’t have it yet, but we’re gonna process the sale for us to do so we want a security deposit, we want a down payment on it. So now they’re gonna pay us once again in advance.

05:15
So that means I would like to use accounts receivable, because it’s the account that deals with customers so that it will line up the payments and the receipts that we will have. And so this is where it’s a little bit different in our adjusting entry here. So what we did is, and this is kind of common, you’ll see this so you want to be aware of it is that when we have a received payment, and it was a deposit, we recorded it as a received payment, and a receive payment normally within the QuickBooks system is a decrease to accounts receivable.

05:45
But because we don’t have an invoice related to it, we put it to receive payment, and that’s going to make a negative accounts receivable, which is not quite right, because we should have a positive liability called unearned revenue. Instead, we have a negative receivable. But that works logistically because that negative receivable then can be matched up in our reports to the invoice that we’re going to create after the receivable. And it’ll all line up in the accounts receivable sub accounts neatly. If we do this kind of method, which is the method we’re going to use.

07:26
o I’m going to say I want a custom date range as of Oh 228 to one. And let’s do that again, oh 228 to one and then run that report. And so what I’m looking for are these negative negative balances for a particular customer. So if I go down, I’m saying okay, this all looks normal. But this one, now I’ve got this payment here that isn’t tied out to anything. It’s just a payment that’s basically just outstanding, just hanging out standing there. And that would indicate because receivables mean that somebody owes the company money.

08:00
So what does it mean? If I have a negative receivable? Well, it really means it’s not an asset anymore, it means that the company owes them money. So it should be a liability. But again, it works well in here as an asset because logistically when I create the invoice that ties out to this payment, it will match out nicely. And it’ll work you know, just like our normal process will work except basically in reverse. It’ll match out neatly so it works logistically for many bookkeepers to do it this way.

08:27
But if I want to report my financials correctly on a on an accrual basis, I need to I need to take this, this accounts receivable and add it back and then record the liability. So I’ll just do that periodically. So that’s going to be our unearned revenue adjustment, instead of us determining the revenue that we have earned and then recording the revenue we have earned into this method.

10:16
So pretty straightforward journal entry. Once we know what it is, you might want to put a note for this one, because this is one that will confuse people who haven’t worked with unearned revenue before. So it’s a new comment, we should put a note on all of them probably. That’s not I want to know, not just a comment, we need a new note. And this is going to be to record customer deposit posit, as a lab bill, I build it to you rather than a negative asset. So something like that. And then you might want to put this is for strength, customer customer is string music, I think it was.

11:07
So then you might put the customer name here on it could be helpful. So it was it was four string music, I think yeah. So we’ll have that. And then if we record this out, then I’m going to go back up top, there’s something in accounts receivable already. So I’m going to double click on it because I have this other transaction and I’m going to add a new one to the end of it plus, and then we’re going to be picking up this debit right there. The 300. So that’s now up to the at 14 141 72. And then the other side is going to go to unearned revenue.

11:39
So I’m going to say this equals the unearned revenue, it’s going up in the credit direction because it is a liability account. So if I the two accounts affected our unearned revenue, and the accounts receivable, we did not do anything to the income statement. So in that sense, it’s not like a classical adjusting entry. Most adjusting entries have a balance sheet and income statement account. And again, most of the time in a book problem, you would be looking at this unearned revenue and then determining how much of that revenue had been earned.

12:08
And then recording it down here in our situation we don’t have that problem we know it hasn’t been earned. It was just put up top as a negative receivable instead of as a as a as a liability down here. And therefore we just need it’s just a recategorize ation problem instead of an issue of determine how much of the revenue had been earned kind of problem. So we’re back in balance on down below so that looks good. No effect no change on then the net income