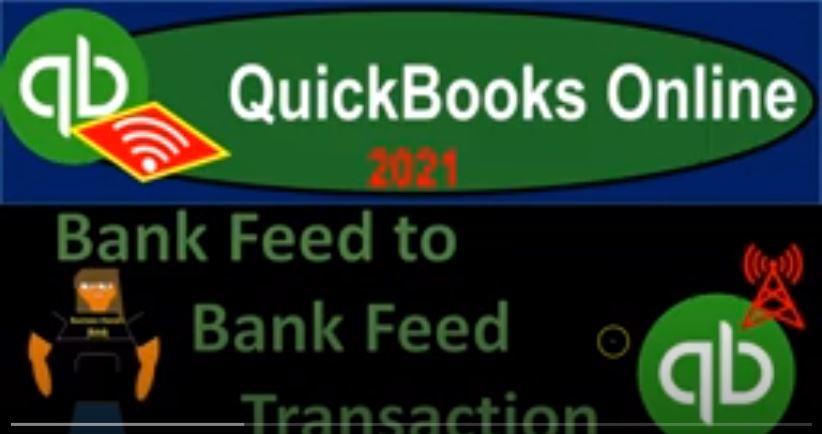 QuickBooks Online 2021 Bank feed two bank feed transactions. Let’s get into it with Intuit QuickBooks Online 2021. Here we are in our quickbooks online bank feed test file and prior presentations, we set up the bank feeds for both the banking account and the checking account and then added data into what I would call bank feed limbo. Now we’re taking that data out of bank feed Limbo, processing it over to the Promised Land of the financial statement creation data. So we have the checking account over here in the transactions tab, and the credit card account

So we’re going to open up the PnL the profit and loss, let’s do the date range change up top from Oh 101 to zero to 1231 to zero, run it, close the burger, hold down Control scroll up just a bit, we’re at the one to 5%. Next tab on over to the left, we’re going to be opening up the reports down below this time being the BS report, the balance sheet report, which is actually good information, even though it has the initials of the s, we’re going to go up top and change the date, it’s going to be a 101 to zero to 1231 to zero, run that report.

And then so is the the liability on the other side of things. If we do this electronically, which is more and more the case these days, then we might just record the transaction electronically, we might not record it once again in the QuickBooks. And that means that we wouldn’t record it into QuickBooks, we’re not going to we’re going to wait till it goes through the bank feeds. And then once it goes to the bank feeds, we should see it on both sides. And then we can go in and in match the transaction out record the transaction out.

The other method we could do is to actually write the check and then actually enter the check and then verify that it has cleared with the bank feeds. So let’s take a look at both of those. We have two of these over here. Let’s let’s imagine that we just made an electronic payment, we didn’t record it in QuickBooks, and we’re going to wait till it flows through through the bank feeds and then just adjust our accounts, that would be the easiest thing to do the most reliant on the bank account type of thing to do. So if I if I go back on over, we’re looking then if I close this out, we’ve got these two transactions way down here.

But now I think it’s it’s pretty safe to basically I just record the transaction going from one to the other and then match it out. So normally what I usually think of this transaction, for example, first coming out of the checking account, because I think of myself basically writing the check that within you know pay off the credit card, the expense and clear the credit card at a later time. So I would normally then go down here and think about it this way, I would say all right, there’s the credit card amount.

And I’m going to say this is going to be they have it here as the transfer account which you could use you might call it a transfer and then the other side going into the credit card, I tend to not use the transfer as much I’d like I like to just use the normal transaction so I would then go to the category on the left side. And then and then say that this is going to be going to a customer or vendor I might not add one because it’s going to the to the account or I might call it you know credit card that we’re paying or possibly Have a name of the credit card American Express or whatever we’re paying.

And then I’m going to call that a vendor. And then the category that it’s going to be going to is going to be then the credit card. So I’m going to call it a credit card, and then tab tab. And so there we have it. And then we could, we could basically make a rule of that as well, because I might call it the Wells Fargo credit card. But I don’t want to do that at this point in time, because I want to treat the other one a little bit different use a little bit different method next time.

So when I record this, what’s going to happen, then it’s going to record this transaction, which is a decrease of the checking account, and the other side is going to go to the credit card, which we also have on the bank feeds. So it’s already going to hit the credit cards, which we can then use the matching method to match out the payment on the other side of things. So what I’m going to do is say alright, let’s confirm that, and then and then check it out. So we’ll confirm it. And let’s go check it out, go into the balance sheet, and then run that report.

then we’re gonna go, we’re gonna go back, let’s go back to the report, then I’m going to go back to the to the credit card side of things gonna go to the credit card side of things, and say now, we should just be able to verify it, notice that it found it already, because it should be able to do that because it’s it’s going to be the exact amount. So it already found it. And now I’m going to do the matching thing. So it’s going to match, I don’t have to enter the category here. So the confusing thing about this one is usually you know, Which side do I start on,

I usually go from the checking account to record the transaction first, and then match it on the credit card. That’s just how my train of thought goes, I probably I would guess that’s how most people’s minds work most of the time, because, you know, you think you’re thinking checking account first, most likely, at least that’s my opinion. So then I’m going to go ahead and confirm that, when I do, it’s not going to do anything, because it’s already been recorded. We’re basically just doing the reconciliation process on the credit card side of things.

So we’re gonna say, okay, confirm, Roger that. So no effect from that confirmation. It’ll help us to do the reconciliation process. Now the other side, we can do. The other way we could do this is let’s imagine I’d actually wrote the check, I’m gonna say, let’s duplicate this thing. And say that we got the credit card statement, we’re like, Alright, we’re gonna pay this amount off for the credit card, and I’m gonna record it first, this time, rather than wait till it clears the bank feed. So I’m gonna say new, and let’s just make it an expense type of form. And I’m gonna say it’s 455 7537 22 on six, seven. So I’m gonna say this is for credit card. And we’ll say, let’s add that didn’t, I don’t I thought I had it on anyways, it’s going to be on Oh, 607 to zero payment method.

I’ll just keep that there. And then I’m going to go down, and it memorized the last transaction. So the other side is going to go to credit card, but the description I’m going to remove, and this time, it’s gonna be for the 537 22. So it’s 537. Point two, two. So there we have it. So once again, I’m imagining this time that I’m paying it first, right, I’m paying it. And I’m actually recording the transaction, and then I’ll verify it, matching it on both sides, both the checking account and the credit card side of things. So let’s save and close this and take a look at it.

This should record the transaction on our financial statements, balance sheet over here, running it, and going into the good old checking account. Good old checking. And then we see that we have this one happen on what did I say six, seven, or something like that? Yeah, there it is. So there’s the decrease. This time, not from the bank feeds, we just recorded it. Now we got to confirm it, which is part of the reconciliation process. And then I’m going to go back and say the other side is in the credit card side of things. So we pay down the credit card side of things.

And we’re gonna say that happened once again on six, seven. So there it is there too. scrolling up top, now we go to the bank feeds and say okay, now it should be a matching thing on both sides. Let’s go to the bank feeds then checking account, scrolling down to the checking account. And I’m gonna say okay, so there it is. It already matched it out. So no transaction is going to happen.

We already recorded it. We’re just using the The bank feeds as part of our reconciliation process reconciling what we’ve recorded in our books to what cleared the bank on the bank side. So we’ll confirm that nothing new happens then because we already recorded it, scrolling up top, other side checking account, we should be able to do the same thing over here.

Notice it already found it. It’s like, hey, look, I found that one. Is that right? And we’re like, yeah, that’s right. Nice work, QuickBooks. And so we’re going to confirm that nothing new happens there. So there’s going to be the inter the inter bank feed transactions.