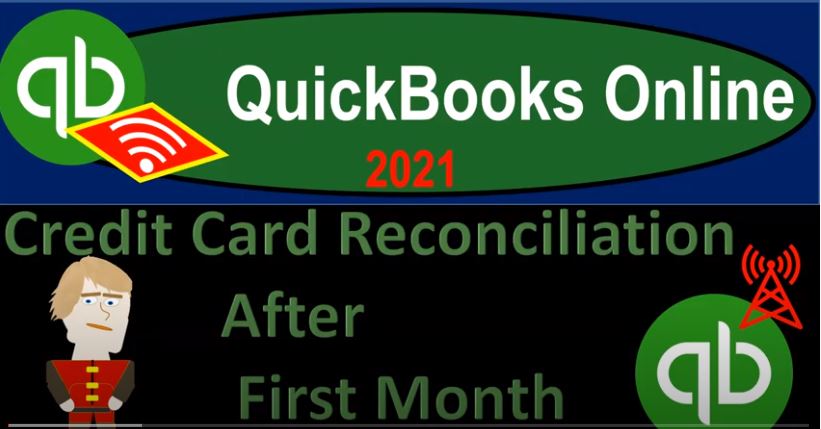 QuickBooks Online 2021 credit card reconciliation after the first month of data input, let’s get into it with Intuit QuickBooks Online 2021. Here we are in our quickbooks online bank, the test file and prior presentations, we set up the bank feeds for checking account and for a credit card account. Then we entered the information that was in in the bank feed limbo. And the transactions tab added some of that information from Bank feed Limbo to the Graceland of the financial statements. And now we’re looking at the credit card specifically, thinking about now reconciling the process of the credit card, how to reconcile then the credit card.

So to do that, let’s first open up our financial statements going up top and doing some duplication of the tabs by right clicking on the tab, duplicating it, we’ll do it again, right click on the tab, duplicate again, we’re going to be opening up the good old P and L and balance sheet by going on down to the reports on the left hand side reports on the left hand side, this tab we want the income statement or profit and loss. So we’ll click on it to open it. And then we’re going to range change it up top. So from a one a one to zero to 1231 to zero, let’s run that report, close up the hamburger hold down Control, scroll up just a bit.

Now I’m actually going to adjust this a little bit because we’re actually looking for the first month, which we’re going to say is on 530. So let’s make this let’s ended that at Oh 53020. Running that report. we’re more concerned here with the balance sheet, actually, let’s go to the balance sheet. And it’s Oh 531. One more time. I’m gonna fix it one more time here, Oh, 531. Because there’s there’s 31 days in May as you as you’re probably aware, and then we’re going to go to the tab to the left hand side and go down to the reports down below and open up the BLS balance sheet type of report scrolling on down, there’s the BLS balance sheet report, and then range change that one.

So this one’s going to go, oh 101 to 020 531 to zero, getting the date right the first time, this time running that report, practice makes better. And then we’re going to go down and say that we’ve got our credit card. So here’s our credit card amount, as of that point in time that we’re saying is basically outstanding on our books, we want to kind of reconcile that to the bank statement in a similar way that we would do with the bank reconciliation, our bank statement, our mock bank statement is going to look like this.

Now, like with the bank accounts, when you do the first reconciliation, it might be a little bit more difficult. Because of this beginning balance, we might not have that beginning balance in there. And we have to kind of adjust it for the first month. Also just realize that when we start to do the data input, you probably want to you’d like to start in January or the first month of your fiscal year rather than the middle of the of the year. But this is just going to be our example problems, just kind of keep that in mind. And then we’re going to adjust this first beginning balance, that’s going to become a problem for us.

After that point in time after we do the first reconciliation, it should be straightforward and easy. From that point forward, it should be really easy if we’re basically depending on the bank feeds in order to record the transactions, because we’re going to get the transactions directly from the bank feeds. Therefore, there shouldn’t be any timing differences or anything like that, we’re just want to make sure to do the bank reconciliation because that will help us to confirm that we haven’t missed any data input, or that we haven’t double double up or duplicated any data input.

And that’s it. That’s our typical problem for the first one. So we’ll deal with that in a second. Then the ending balance we’re going to say is going to be that 129 338. So we’re going to and then the end date is going to be Oh 530 120. And once again, it would be best if we were starting at the beginning of the year. If that was January, then it would be better to do that. But practice problem practice problems. So we’re gonna start the reconciliation process and see Here we have a reconciliation, I won’t go into it in detail because it’s similar to the the information for the checking account.

But you can see up top, we have the statement ending balance at this point in time, the cleared balance, and then we’ve got the beginning balance the charges, the payments, and here’s gonna be the difference on the right hand side. So notice the thing that’s a little bit different here than when we practice the bank reconciliation before for the bank, the bank reconciliation, the checking account, rather than the credit card account, is that it already checked them off. And you might say, Well, what how did it do that? Well, it did that because we use the bank feeds.

And that’s one of the benefits for the bank feeds. If you did a full service bookkeeping process, then as you do the bank feeds, it’s reconciling for you. That doesn’t mean you don’t need to still do the reconciliation, because the reconciliation is the actual report. So you still want to do this process of the reconciliation. But it should be really easy, especially once again, if you’re just depending on the bank, to record the transactions. But let’s uncheck them for now, just so we can kind of get an idea of this, I’m going to uncheck the whole thing here.

Now I would normally enter it before you want to enter this before the date that that is the current year that you are in. So that if there’s a problem, and in the beginning balance, someone wants to look at the beginning balance, they should be looking at the prior accounting system, because we’re going to start as of a certain point in time, usually that would be January. But again, we’re starting kind of in the middle of the year, but I’m going to enter this as of last year, which would be let’s make it 1230 119. And this is going to be the beginning balance adjustment. And then I’m going to say this is going to be the for the 501 point two eight.

Now if I put it to some income statement account, because I put it in the prior year, it’ll roll into equity, but you might just want to put it to an equity account here. So it’s going to go straight to an equity account not affecting the income statement. So I’m going to say it’s going to go to some type of equity, QuickBooks normally puts the beginning balance into opening balance, but that’s kind of like a not a real account. So what you want to put it into it’s probably the retained earnings or the owner’s equity or the capital type of accounts and this will show up on the balance sheet not having any impact on the income statement.

So there is that and let’s go ahead and then save it and close it. So save it and close it and then the effect on that on the financials go into the financials then will be that will have the credit card now has this beginning balance It is going to refresh when I go into it. So refreshed credit card balance, let’s make this beginning date as of 1230 119, run it. And there, there’s that beginning balance that we entered there, other side going to the equity section going up top, it’s going to be in the equity section down here, put it to owner’s equity,

and I can’t go into they won’t let me drill down on that. But it’s in, it’s in the equity section, no effect on the income statement bottom line, or that’s the main thing that we want to make sure does not happen because it was for prior periods. Now let’s go back into our reconciliation, reconciliation and the accounting tab reconcile. And we’re on the credit card, and we’re going to resume resume the reconciliation process. And now that our beginning balance still doesn’t tie out here. But once I’ve checked this one item off, then that should be the same as the beginning balance, right?

So there’s the 239 66, the 169 95, the 190 906, the difference now down to zero, so we’ve reconciled it going forward, the beginning balance will match. And if we get everything directly from the bank feeds, then we should just be able to check everything off when we do this reconciliation. And it should be really easy to do, you still want to do it however, because that helps you to double check that you didn’t double input anything, or that you missed something, something got deleted, something didn’t pull over from the bank correctly.

So that’s our demo, we’re gonna say finish it, finish it, finish it. And there we have it. So So now it’s done. If you want to look at the history up top, then you have your reports for the credit cards here. And you can take a look at the reconciliation report, it’s going to be a very boring report. Because there are no reconciling items, meaning there’s no like outstanding items as there would be on the checking account if it was a full service kind of accounting system. Because once again, we basically built our books from the bank.

So there’s not really any reconciling items. But you still want to reconcile because that helps you to make sure that you didn’t double input anything or not include anything that should have been included from the credit card statements. So when we reconciled no no more impact on the on the accounts up top. And, and we’ve now we’ve now done the reconciliation process, if I go to the to the balance sheet, we currently have on the balance sheet that 1009 to 293 38.

And so that’s going to match the 1000 to 9338. Because again, there are no reconciling items. There’s no things that are books that didn’t clear the institution yet, because we’re waiting until they clear the institution, the credit card company, the financial institution before we record them under this system. So now we’ll do the next one and the next one will be it will be really easy to do because we won’t have that beginning balance problem. We’ll see that next time.