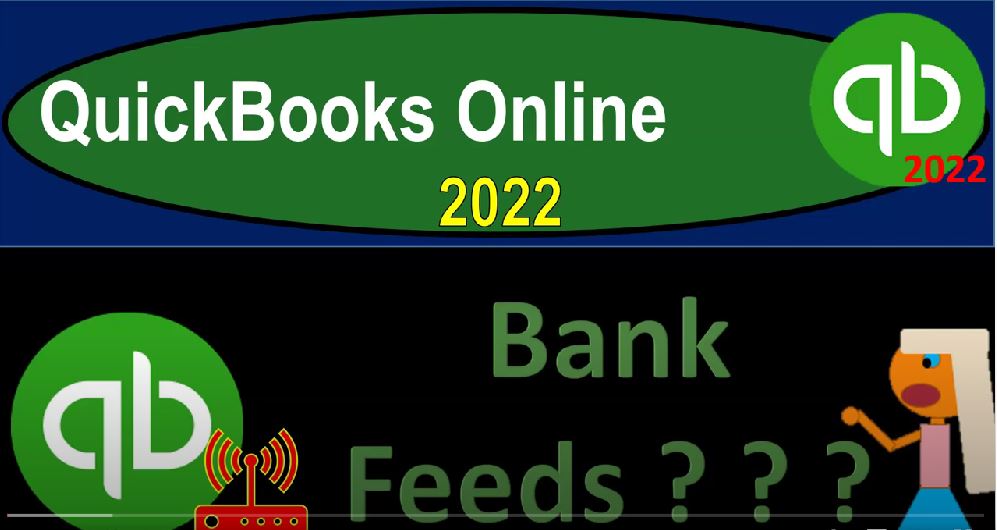 But you may not have set up just so we can get the latest look and feel and at least the business view with the icons on the left hand side. So now we’re going to be thinking about the bank feeds. And I just want to note that we’re not going to jump into the bank feeds at the beginning, we will have a whole section that will go into bank feeds after we go through the General Accounting problem. So if you really want to jump down to the bank feeds, you can do that.

And you really learned that by just learning the general kind of accounting system that’s going to be set up, and then how the bank feeds are going to fit in. So when you connect to the bank feeds note what’s going to happen is the banking information really only has the increases and decreases to the checking account.

But the system can’t just take that into QuickBooks, and then automatically create the income statement and the balance sheet without help from you. So what it first does, and this will be more important when you first do this for the first few months is that it’s going to put it into the bank feed what I call bank feed Limbo here.

And it’s going to have all these accounts that will listed out, which is basically going to be what you would see on your online banking, or on your bank statement that increases and decreases to the checking account. And you’re going to have to add that the missing information, which is going to include what account do you want it to go to and the vendor or the customer that would need to be added here before you can add it to the system. In other words, when you first set up the bank feeds, all this information is going to be flowing into QuickBooks,

And you know, how are the transactions going to be recorded when you entered into the system, and you need to know a bit about the chart of accounts. That’s going to be set up so you know which accounts should be hit when you when you have the increases and decreases to the account. Now just to look at this in a little bit more detail. I’m going to go into the into a flowchart here some outside of the QuickBooks system. I’m just in a one note as a screenshot of the flowcharts.

Notice that this this one is a screenshot of the flowchart that is from the QuickBooks Online, and they’re starting to include the flowchart, which I think was a popular request from the desktop version users, people that liked the idea of the flowchart, but it’s changing a lot. And they’re calling it a little bit different money in money out. And they’re not really adding some of the accrual components, they’re trying to customize it. And so I’m expecting, this flowchart will still go through some variations, as they as they tinker around with the online version.

So I’m going to go up to the old standard desktop version, which hasn’t really changed at all forever. And the reason I want to use that is because it’s more static, it’s probably not going to change as much. And you get a clear example of basically, you know, the general flow of the accounting by cycle vendor cycle, customer cycle and employee e cycle. And we get an idea of where the accrual kind of components are going to be. Note, when you move into the online system, people get kind of upset.

And they’re going to be using, in essence, the same form types, because that’s part of the double entry accounting system hasn’t changed for a long period of time, they’re just going to change kind of the look and feel of how you get to those forms, and possibly what those forms will look like with the data input. So so that’s why I want to basically go up here and take a look at the flows and just think about how the bank feeds will fit in.

And know again, we’ll spend a lot more time on this one we get into the bank feeds after in its own section. So notice, the easiest thing to add the bank feeds in would be a system where you’re on a cash basis, not only on a cash basis, but also you’re completely dependent on the bank to create your books. And that would be a system where you’re not selling things typically, where possibly you’re an online kind of kind of system that you’re getting paid from platforms online.

For example, if you’re getting paid from amazon for royalties, or teaching platforms or something like that, or a YouTube revenue, AdSense revenue, and you’re just saying, hey, when I get my money, I’m just going to take that money, and I’m just going to record it as revenue. If that’s the case, then you can wait for it to clear the bank. And you could do that with the bank feeds, which would basically be recording a deposit when the deposits hits your bank and just record revenue at that point in time. And so that in that case, you can kind of be dependent on the bank.

However, if you’re in a cash flow type of system or a cash basis system, where you make sales at the same point in time that you collect the cash, anything where you’re imagining a cash register is involved, then you’re typically going to be recording the revenue at the point in time you make the sale with a sales receipt over here, so you’re gonna have to record the revenue there, and then you’re going to make the deposit to the bank account.

So in that case, it’s going to be a little bit more difficult for you to just be reliant on the bank feeds, the bank feeds will more likely be a verification tool of what you’ve already entered into the system. And if you add an accrual component to your system, meaning you’re in some kind of accounting system, such as any kind of service system, like a bookkeeper, a law firm or something like that, typically in that case, you will have you will do the work of before you build the client, you’ll count your hours as you’ll determine what it is you did for the client and whatnot, and then you will invoice the client.

And that means that no cash is taking place at the point of the invoice, you’re increasing an accounts receivable, the other side’s go into sales, this is an accrual component. So in that case, you got to think okay, well, how are the bank feeds going to fit into my invoicing process. Because if I invoice over here, now I’ve done something on an accrual basis, I cannot just create my books on a cash basis and be too bended on the bank.

When the information clears the bank, I’m gonna have to tie it to the invoice or to the receive payment, or to the deposit I make manually into the system. So in other words, more the more accrual components that you have, the more difficult the bank feeds are or in other words, the more you can have to think about how you’re going to fit the bank feeds into the system. If you have on the pain side of things, if you pay all your bills electronically with a with a bank transfer, and you don’t have really outstanding bills that you’re tracking, you just pay them as they come in.

That would be the easiest thing to be reliant on the bank feeds again, because you could just wait till they clear the bank and then record the related expense as the bills clear the bank. However, if you enter bills into the system, and you’d like to sort the bills as the rent of the system, now you’ve added an accrual component. And that’s going to make the bank feeds a little bit more difficult to tie into your system.

they’re still useful tool, but they’re not doing the exact same thing as they would if you could just rely on the bank feeds themselves to basically create the whole financial statements. And the way to do that is to learn a little bit about the accounting system in terms of what these forms are doing. What’s the transaction that’s happening when I enter these forms? And then where does the deposit or the payment fit in?

Which of the transactions that are happening with the bank feeds into my accounting system? And how can I set that up. So if I jump back on over over here, notice that setting up the bank feeds isn’t a difficult process just connecting to the bank, that’s not the difficult part, you can do that in a fairly straightforward way that and we’ll talk about that in the bank feeds section.

The difficult part then is once you have the transactions in how to add those to the system, how to add the rules, so that as the time goes by, it does become more and more automated. So the bank feeds can make the system a lot more automated. So you don’t have to do as much work. But on the front end, when you first start entering the data, it’s going to be a little bit more complex there. If we go to the if we go to this, this system, notice they’ve got a different little bit different of a layout, they’ve got the banking here, which you would think would be your bank feeds, if you’re looking at the business layout the way they currently have it.

But this is the bank connection, they’re kind of trying to sell you their own banking system, which we might look at, in a future in a future section a bit more, but it’s under the bookkeeping items down here. And then you’ve got your transactions. So they’re kind of playing with the terminology and whatnot. But like I say, it’s the accounting system, the tools are all going to be the same.

They might they might adjust the locations of them a bit as they’re trying to find that that best location and the best language that they think is the most marketable, connecting to the bank. They’ve got that pretty down at this point in time that connection isn’t the problem. But there’s still going to be an issue with you with you basically fitting the bank feeds into your accounting system and you have to know a bit about your accounting system to do that properly.