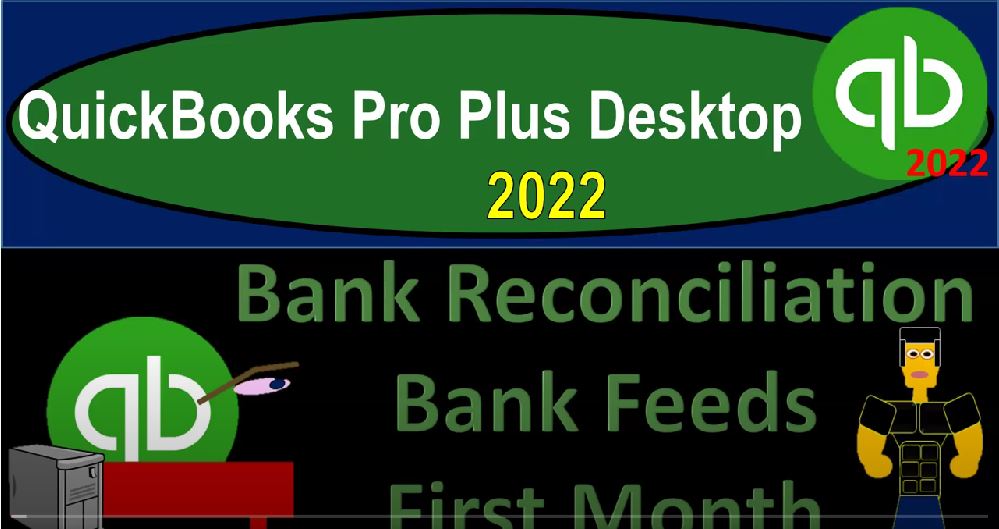 Get ready because we bookkeeping pros are moving up the hill top with QuickBooks Pro Plus desktop 2022. We are in our bank feeds practice file going through the setup process with a view drop down the open windows list on the left hand side company drop down homepage in the middle maximizing it to the gray area reports drop down company and financial taken a look at the balance sheet standard with a customization up top and arranged change

this time going from 1001 to one that being our starting point to 1031 to one because we’re going to be looking at the bank reconciliation for the period of 1031. I’d like the beginning date at the beginning of the month. So when I drill down on the information in the bank account, we get the detail for that month.

So I’m going to say okay, there we have it, let’s customize it again, because I also need to change the fonts and numbers changing the font size. Let’s bring that on up to 14, I’m going to say okay, yes, please. And Okay, second month of bank reconciliations now as of October 31, which should be very straightforward, assuming once again, that we’re building our information in our system directly from the bank feeds.

In other words, once again, we’re not going to if I go into the homepage, a full service bookkeeping process where we’re entering the data on our side, which we could do if either on a cash basis or an accrual basis, and then checking it with the bank reconciliation and the bank feeds. But rather, we’re waiting until everything clears the bank that includes the checks and the deposits, and then constructing our financial statements directly from the information from the bank.

That information, of course, be the same information being used to create the bank statements. Therefore, the bank reconciliation should be quite easy, especially after that first month, because the first month, we might have that beginning balance problem in that when we download the data from the system from the bank, we’re downloading the activity, and it has to start somewhere.

So if we had a balance before the downloaded activity, we’re gonna have to enter that beginning balance, which could make the beginning balance bank reconciliation, a little bit more difficult for the first month, the month going forward, should be straightforward. So in other words, if I go back to my balance sheet, and I look at my ending balance, as of this point in time, I’m at the 41 366 78.

And if I go to my bank statement 41 366 78. It’s the same because we took the information directly from the bank. So you might say, Well, why do I need to do the bank reconciliation, it’s still kind of a good idea to go through and process the bank reconciliation, because that’ll force you to kind of double check periodically, that your balance does tie out that you don’t have any outstanding checks and deposits, of course, so you don’t have that reconciliation issue there.

But we could double check that we haven’t double input anything, or entered anything or missed inputting anything by doing the bank reconciliation. So this is the second month of the bank statement, you can see the beginning balance at the 20,005 4480 is tying out to the ending balance of the prior period. And so that will also tie out to our books. If I go back to this period, there’s the 20,000 554 80.

If I go to my bank statement, double click on the checking account. And because I started at 10, one, the last period 20,000 554 80, and we’ve got the 20,000 554 80. So everything’s tying out because we got this information directly from the same source, then we have the increases, we’ve got the decreases to get to that ending balance, then we have the activity of the deposits and the checks and decreases. And once again, this information should match exactly what is on our books if we built our books directly from the bank feeds.

So it should be a very easy process to just go through the bank reconciliation, and make sure that we haven’t double input anything or missed anything. So I’m just going to go then and close this out.

And let’s go to the banking drop down and let’s go to the reconcile banking and reconcile now I’m in the checking account, it’s going to be 1031 the beginning balance now populates automatically at the 10 554 at the 10 554 80 matching the beginning balance on the bank statement as it should that should always roll forward going forward. The ending balances what we need that’s going to be then the for 1334136678 so 4136 6.78 that right?

I forgot already 4136 Like 6.784136 6.7 Yeah, I was right. I know I was right. I know what I’m talking about here. So we’re going to then continue, continue on. And I’ll minimize this on the left hand side. Now, this time, our beginning balances is correct here.

And then if this was a bank reconciliation, where we had not gotten the information directly from the bank feeds, we would typically be going from the bank statement, and ticking and tying each of these items out the beginning balance ties out, we already saw that, that ties out and then we would look at the detail.

If it’s on the bank statement and not on our books, most likely, we would then have to add it, because it actually cleared the bank. Unless the bank is wrong, which isn’t usually the case, it’s usually that we have to add it on our side. That’s normally what we would do.

And we don’t have, we don’t expect to have anything on the bank statement that we don’t know about, such as bank charges and interest, because we got our information directly from the bank. And therefore we waited till it cleared the bank before we constructed our books, meaning and that means that we lost some of that kind of internal control over over the banking system and the accounting system in general. But it’s a lot easier to do that way.

And then the bank reconciliation will be easy if that’s the way we constructed it. So then you can usually just say, I’m just going to mark everything off at this point. And it should automatically reconcile unless there’s a problem. And the problem that you would expect to happen if it doesn’t tie out exactly would be that you entered something twice, or that or that you missed something that had been input in that event, then you would just simply go big back and forth, just like just like a normal bank rec,

And it should be easy to do. Like I say, in this event in this instance, if we got the information directly from the bank feeds should be really easy to do. But if there’s a problem, it should be quite easy to find and locate exactly where that problem is. And then take action at that at that point.

So you really want this to get to zero, if it’s not at zero, figure out why. Because that’ll increase your level of security or your level of internal control, have assuredness that everything has been entered correctly.

So we can just simply reconcile here. And once that is zero, we’ll get our reports the reports are not as important in this case, because we don’t have any reconciling items because we got our information directly from the bank.

So I’m gonna say it let’s let’s display them though. We’ve got these two reports, let’s customize here and make it a little bit larger. This is the summary report, make it at 14 again. And now if these reports were something that that did have reconciling items, then you’d probably want to print them out so that you have a hard copy of them.

They’re different than other types of reports because they’re not being constructed when you do the data input, but rather a checking the internal control between the bank and the books. So it’s just going to mirror what’s on the bank statement at the top.

So in other words, this bank feed number on the bank statement, as of the point in time we’re reconciling 12, October 31, is the same as our register balance what’s on our books 41 366 78.

In other words, if I open up, the caret, is going to be on the balance sheet, the 41 366 78, so nothing to reconcile. And that’s good. So we’re gonna say that’s good. And then this is the new stuff that happened down below, which really, again, isn’t really part of the bank reconciliation. That’s like what happened afterwards.

But QuickBooks likes to tack that on, for some reason. So then, if I close that out, we’re going to get then the reconciliation detail. This is the Detail Report. Let’s customize it. fonts and numbers, bring that on up to 14 again, okay, yes, please. And okay, same information up top, except now that you got the detail, this just mirrors all the activity now, that is on the bank statement.

But if you do have outstanding checks and deposits, because you didn’t make your bank your books directly from the bank feeds, but rather use the bank feeds and reconciliation to check your books, you will have outstanding checks and deposits. And this is the report that you want to use in that event. Because the summary reports just gonna say hey, there were five checks that didn’t clear in what you want to know is which checks didn’t clear.

So the information that’s going to be in between this area that cleared and the registered, what’s on the bank and what’s on the books, in other words, is the reconciliation you would be looking for there is nothing here because there are no outstanding checks and deposits. If you want to look at instances where we do have outstanding checks and deposits. We do have courses on bank reconciliations, and you could dive into that in more detail.