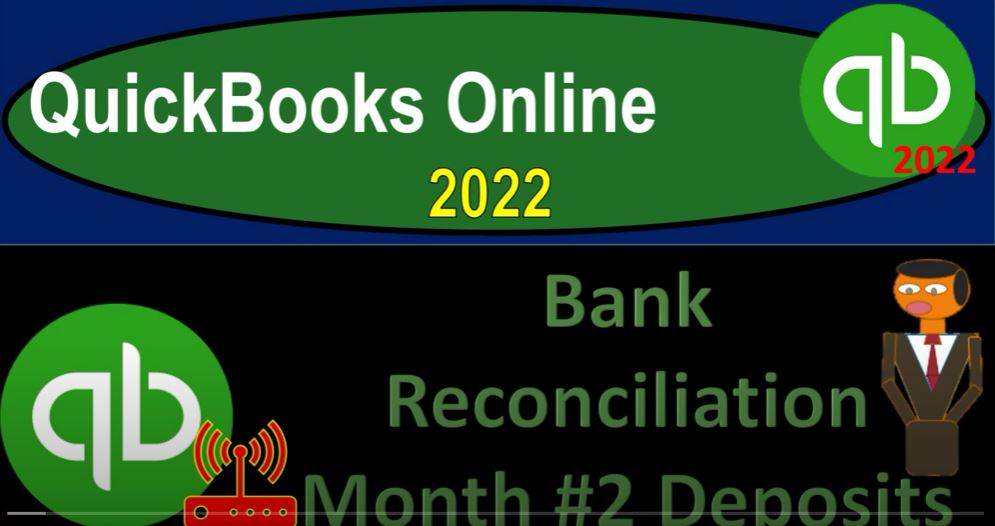 QuickBooks Online 2022 bank reconciliation month number two deposits Get ready because it’s go time with QuickBooks Online 2022. Here we are in our get great guitars practice file, we set up with a 30 day free trial holding down control scrolling up a bit to get to the one to 5% currently in the homepage,

we will be toggling back and forth between the two views, either here or by jumping over to the sample company file currently in the accounting view, going back to the get great guitars opening up a couple tabs to put reports in by right clicking on the tab up top, duplicating that tab going back to the tab to the left,

They spend their whole life there unless QuickBooks tries to change where their home is any case over here and the other view, they change their home, it’s in the business overview. Under that other place, so we’re gonna then close up the hamburger. gonna close this thing that they keep on giving me up here,

get out of here, and then we’re going to open up the balance sheet. Let’s open up the big balance sheet, do the range change up top from a 101. This time, I’m going to take this to o 22. That’s the same didn’t do anything different there, oh 228,

two to the end of the second month of operations. That’s where the new stuff is happening. Let’s run it and then go tab to the right tab to the right business overview on the left reports, closing the hamburger profit and loss P and L the two faves going up top range in the change in from a 101 to 2202 28 to two,

let’s do our month breakout over here to switch things up to the month by month and run it so we can see the side by side January February, the Jan the Feb, the tote, we’re working on Feb at this point in time, but mainly focusing on the balance sheet accounts of cash.

We’ve talked about that last time after that point, then the reconciliations should be easier. So this reconciliation process should reflect the process going forward for the rest of your bank reconciliation kind of experience.

So we’re going to be reconciling here as of the cutoff date of February 28 2022. This is what is in our books, it’s not going to typically tie out to what is on the bank statement due to the fact that we’re gonna have reconciling items, outstanding checks and deposits.

instead of integrating the bank feeds into our accounting system that might be a little bit more complex than that possibly because it’s an accrual system, or one in which we want to be tracking the transactions in our account using like register Sales Receipt type of transactions, then you’re going to have those reconciling items.

Let’s go on over to the bank statement here. Here’s the bank statement for the month of Feb. So it looks similar, but it’s starting out here you can see at the 61 241 85. If I jump back over to January, that was the ending balance.

It doesn’t tie out of course to what is on the balance sheet here, but it does tie out to the clear balance that we put in place, which we can track with the bank reconciliation, little widget thing on the left hand side.

And so now I’m inside of the next reconciliation, you got this little path up top. So if I went to to the bank register, for example, that hold up, let me open up the hamburger again, go back down to the bookkeeping, and then I’m going to go into the reconcile. And so there’s our reconciling items. Closing up the hamburger, you also have the summary items on the right hand side. And that’s where you could go and see the last bank reconciliation here.

So now I’m going to go back and toggle that back on over to reconcile and do the next reconciliation, which is still in the cash account. In essence, the checking account, we’ve got the beginning balance to 61 241 85. Notice, I can’t change that it’s static in there.

That’s where our problem was in the beginning balance for month one, that we don’t have a problem any longer that problem is gone. 61 241 85 No problem, then we’re going to have the ending balance 1015 9005.

And then we have the items down below the service charges and the interest typical items that might be on the bank statement, not on our books that we could add as we go in here. But I don’t like doing that. Because I like to basically, it kind of confuses me,

I’d like to take and tie everything off and then enter those transactions directly into the register. So that’s what I’m going to do. So I’m going to start the reconciliation process. Let us begin.

So here we have the reconciliation stuff up top, like we saw in month one, we’ve got the Indian balance, and that should tie out to the ending balance here. That’s going to be the not the 1015 90 for the bank statement. Then we have the subtraction of the beginning balance.

So we’re going to basically match out our reconciled items to what is on the bank statement, we’re starting out with the beginning balance. So if I go on back on over here, this number basically works that reconciles right there, that’s great.

That’s where the problem was with month one don’t have that problem in month two. So it’ll be easier, then we have the payments and the deposits, we don’t haven’t checked anything off these will be added as we check stuff off on down below.

Those are simply uncleared that’s what QuickBooks will make the bank reconciliation based off of. So let’s close up this little caret. So we have a little bit more room down here, we went over the filters last time, the main filters you’re going to be looking at are the payments and the deposits to kind of sort your items down below.

You also might sort by reference number for example, instead of date, but date would probably be the most common use of the sorting, we’re going to go into the deposits and just take and tie off of that deposits, remembering that if it’s on our bank statement, if it’s on the bank statement, but not on our books,

then we’re most likely going to have to add it to our books. If it’s on our books, but not on the bank statement, then it could possibly be an outstanding item.

everything on the bank statement will be on the books so it’s a little bit easier to go and think about it in your mind that way. Also, just remember that the deposits are comprised of the bank data has the date, and it has the amount at the minimum.

And so the date should be more relevant with the deposits because you probably made the deposits either by depositing directly into the bank or by basically electronic transfers.

Therefore the date should be pretty close to when it got processed and when you entered the actual deposit so that date is going to be more readily event than possibly,

if you were using checks, for example, where the date it cleared could be much different than the date that you put the money in. If you have electronic transfers, as opposed to just depositing, say cash, for example,

then you could have a memo as well, that could give you more information about like the customer, for example, that could make things a little bit easier to take and tie as well.

Now, in other words, if you’re receiving the payments here, or you have the create the sales receipts here, and you’re basically putting them directly into the checking account at this point in time, that can work.

But only if the the you’re not basically, when when the actual money hits the bank, it’s not being grouped in with multiple sales receipts, and multiple received payments at the same time, which it would be if you’re, for example, collecting cash,

So that when they hit the checking account, they’re grouped in the same format, making the bank reconciliation process a lot easier. And so then it should be a really easy process if that all lines up here. And we could just say, Okay, I’m going to look for the 34 172 50.

There it is. And then yellow wise did yellow, whereas four or 507 70. Also note that the dates are on to one and two, five when it cleared here. And if I go on over to the bank statement, they we work them on 125.

So this last one, this one was the one we wrote in January, which was uncleared as of January, it wasn’t part of the cleared items it cleared in February. So it was part of the balance in our balance sheet as of January. And that’s why it was one of the reconciling items in in January.

So if I went to the reconciling report just real quick, this was the reconciliation we did. And I was to go and say, let’s see the outstanding deposits.

Outstanding deposits was right there. There’s the 34 7250, which was a reconciling item last period and this period, it clears that’s what we expect to happen. This one was written of course in February. Okay, let’s go back on over and say the next ones for 508704 or 50870.

It cleared to 28 you would expect it to be like kind of within three days. And if we got our dates wrong and the practice problem, just it should be around three days you would think right? So 400 To 28 to 20 401 more.

So at this point in time, you can either take off the proper amount or you can follow along with us and we’ll be off by basically the that $200 Until we reconcile that or find that when we get to towards the end of the bank reconciliation next time.

Okay, so now we’ve got those in place and that we’ve got some items that haven’t been ticked off, that are still in that, that are over here. And that’s okay because we would expect them to then clear in the following month,

so so it’s the same thing that we saw in January, except now we can get a better example of how these uncleared items are happening on both sides of the cut off the January cut off, or at the beginning of the month, February 1 cut off or January 31 cut off is this one,

which was outstanding uncleared before reconciling item which cleared now in the current period. And then we have these two items, which are going to be reconciling items at the cutoff at the end of the period to 28, February 28,

in this case, two checks that have been written or not checks to deposits that have been made, which have not cleared. And so we’re going to be able to check them by seeing if they cleared in March, which we can do now, given the fact that if we’re reconciling for February,

we will be doing that process sometime in March. So I can look at the bank statement to see if they cleared if they have great, they’re just going to be a reconciling item. When QuickBooks creates the back big reconciliation.

When we finally hit the green button up top saying we’re done. It will then reconcile those items as part of the difference between what’s on our books here, and what’s on the bank statement terms of the Indian balance.

Okay, I’m going to zoom back out a little bit. That’s where we stand at this point in time. I’m going to save it for later and we’ll go on to the decreases. Next time. It’s going to be great. So don’t don’t miss it.