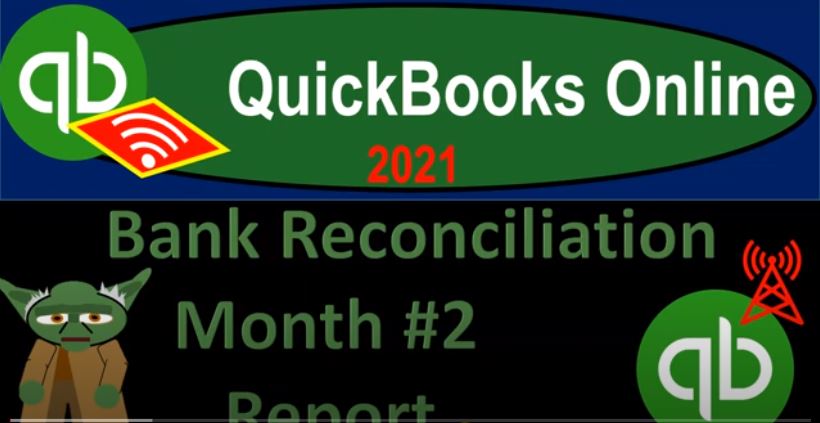 Therefore the Indian item here, the 1047 4462, as of the same date does not match what is on our books, even though we’ve done the bank reconciliation process. Because of those outstanding items. That bank reconciliation report will then give us what those outstanding items are, let’s check it out by going to the first tab. And you would think it’d be under reports. But it’s not you can kind of find them there. But it should be down here under the accounting. So it’s under accounting and then reconcile. And then you got to go to history by account.

And so now this gives us both of our bank reconciliations, which is nice, because sometimes some software only gives you access to like the last bank reconciliation you did. But we have both of these lined up here we did month, month, one month, one and month, two January and February, one after another, if you forget to get here in this format, you can also look for it in the reports on the Reports section.

And just simply type into like the fine screen, you would probably think bank reconciliation, but just type in reconciliation instead. And then it’ll say boom. And then if you go to that find search thing it takes you right where we were a second ago accounting, reconcile tab cookie trail, go into the history by account, we’re now looking at the second bank reconciliation, the latest one on top that being February 28 2021. Close opening that then closing the hamburger, here’s our report. So the way they kind of break this out as they get the summary on top.

That just mirrors what we have in our bank statement. So again, not the most important thing, and that gets us down to the 1047 4468. So there’s the 147 4468. So this is kind of the beginning of our reconciliation process. So the bank reconciliation in summary is basically this number, and then the uncleared transactions, those being the unclear checks and deposits, getting us to the register balance, which is the 1085 4237 that then matching what’s on our balance sheet, go into the second tab, double check that there it is 1854 237 looks good.

Back to our report. So in summary, these three numbers, those are the important ones, those three numbers, if having an audit, if auditor then asks for the bank reconciliation are the ones that are concerned with, then they’re going to say, hey, look, this number 379 769. We need more detail of that I want to know exactly what the checks were and deposits were that are constructing that number.

So the QuickBooks report then gives you all this other information with that reconstructs everything, which again, you don’t need most of it for a normal kind of bank reconciliation, for example, they got the checks and payments that cleared and that basically just mirrors what is on the bank statement. So let me jump on over that just mirrors you know, these items, the 11,500, the 3457, and so on. So that just mirrors these items.

So that’s not really new information that adds up to the 25 535. And then we got the deposits, which again, just mirrors what’s on the bank statement. If we were to jump over the bank statement. There’s our three deposits adding up to the 25 535 32 actually sorry, that adds up to the 40,009 45. So 40,009 45. And then the important thing, the unclear checks and payments, these are the ones that we wrote in our books in February and or before, but most of these aren’t February I, there’s one in January, that one didn’t clear all the way since January.

These are the ones that we wrote before the bank statement date, end date, which in this case, 228 2021, which did not clear they’re not on the bank statement, and therefore, these are the reconciling items. So I want to know what these are down to the penny really, because that means that if I know exactly what the difference is, and I can legitimize these items as being correct, not just like a plug number that was put in place, then then that means that everything else is basically got a pretty good high level of assurance that they’re correct, because we know exactly what the difference is.

Once again, if we wanted to check and double check any of these numbers, we can do so by simply checking our bank account as of this point in time, because when we do the bank reconciliation, for example, on or for February 28 2021, it will be sometime in March. And we can check online banking to see if these items have cleared in March to verify that those are legitimate items and that there’s no problem with them that they have cleared.

And therefore they’re legitimately uncleared legitimately legitimate timing differences, differences that mean that we know what the books should be because we entered them correctly. But they have not yet cleared the bank as of this point in time. And then of course, we have the deposit down here as well, for the unclaimed deposits, same kind of scenario.

And these, if we were to add them up, which we’ll do now, of course, if we add these up, because that’ll be fun, they add up to the this 507 4.01 minus the 887 1.70. And that’s going to be that 379 769, which is which is going to be this difference. So now we that’s where the difference is. So if an auditor was the ask for this report, what you’re really looking for is here, there’s the bank balance, there’s our book balance, there’s what the difference is.

Now I want to know what the actual difference is in terms of checks and deposits, because that’s just like a number to me, I want to know what the actual things are. So that if we wanted to double check that audit that verify that, then we can go to those line items and see if they cleared at a later point and therefore see that they were indeed, just timing differences as a point as of the point of the bank reconciliation. So there’s where we stand.

Now let’s go ahead and print this thing out. And we’ll save this one. So you can kind of review it on your own time, compare it to what you have. So we’ll print it out up top, I’m going to go ahead and use the cute PDF printer to print it as a PDF file and printing that out, it’s going to ask me, where do I want to put it? I think now, it should. There it goes.

And then I’m going to put it in here, I’m going to say this is going to be the bank rec, this is going to be the think bank can’t My fingers are on the wrong thing. Bank Rec and this is Oh 228 dot 2102 dot 28 dot two, one and save that. That’s where we stand at this point in time. Also note that I’ll open up a trial balance because we have made some changes to our books during the bank reconciliation process.

And then we’ll make the bank reconciliation report which will just include the outstanding items, which are the timing differences. So to do that, I’m going to right click on the tab up top, duplicate this tab, we’re going to go to the reports on the left hand side. And let’s open up the trustee TB trustee TB for the trial balance. So the trial balance there it is opening that up range change,

I’m going to bring it all the way out to December 1231 to one even though there’s no data in there, I believe after February but we’ll run that report. And then close up the burger hamburger hold down Control it’s already at 125. This is where we stand at this point in time we will also be printing this out. So if you want to check your numbers now or on your own time you can do so