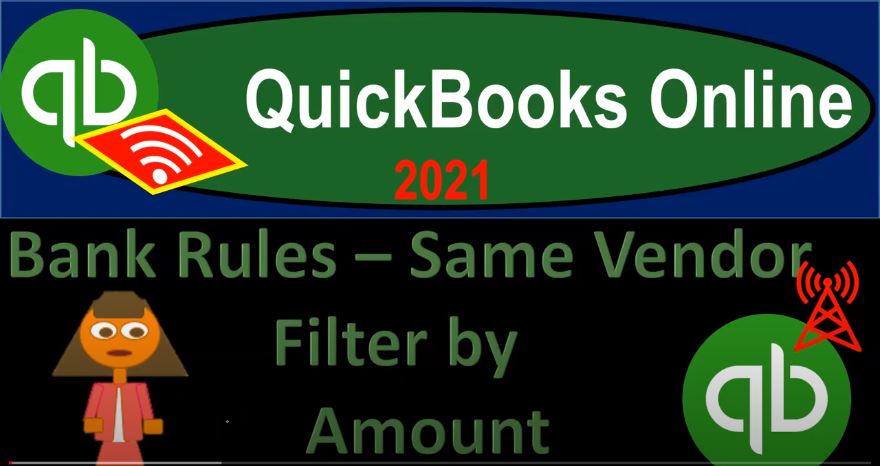 QuickBooks Online 2021 Bank rules filtering by amount. Let’s get into it with Intuit QuickBooks Online 2021. Here we are in our quickbooks online bank, the test file and prior presentations, we set up our bank feed enter data that is now in what I would call the bank feed limbo. And that transaction information, we’re now going through that information and adding it to the promised land from Limbo to the financial statements, we’re looking at the bank rules now a little bit more complex on the bank rules, this time applying a rule out, that’s going to back filtered by the amount.

So first, let’s open up the financial statements go into the tab up top right clicking on it, duplicating it, going to the tab up top right clicking on it again, duplicating again. So that we can open up the balance sheet and income statement otherwise known as the P and L profit and loss. So we’ll go to the reports on the bottom left hand side here, we’re gonna start off with the P and L report the profit and loss report opening it up date range change up top from over 101 to zero to 1231. to zero, we’re going to go ahead and run that report, close up the hamburger hold down Control, scroll up just a bit to get to that one to 5%, then to the next tab to the left.

So we can do this, again, go into the reports down below the BS balance sheet report, opening that up date range change up top from once again, a 101 to zero to 1231 to zero, running the report we were running. And then we’re going to close up the balance sheet there. So now we want to think about adding information. We want the bank rules to do it automatically. But we have a situation where possibly we buy multiple things from the same vendor.

And sometimes we want to break those things out into multiple expense accounts. In other words, if it goes to the income statement, we might have some items down here that we would want to apply to say supplies and some items that maybe they’re over a certain dollar amount. And we want to consider whether or not they shouldn’t be in supplies, but rather, should be going on the balance sheet as something that would be a depreciable item. So this would be applicable oftentimes with large stores like like Office Depot, Home Depot, Costco, or something like that.

Or if you’re buying buying supplies, and you’re trying to see should this be something that I can just expense in terms of supplies? Or is it something that I need to be capitalizing, we might then set up a rule to help us out with that. And the rule could be based on the amount. So let’s go to the tab first tab then and check it out. We’re going to then hold down Control, scroll down just a bit, I’m going to close up the hamburger. And then we’re going to scroll down here. And I’m just going to pick one of these we did this when we looked at Costco on the on the credit card side of things, but I’m gonna I’m gonna imagine this item right here.

So these items, we’re gonna imagine, let’s imagine we’re taking these items. This is a vendor from like a host, a warehouse type of store, like in Amazon would be another one where of course, you might buy a whole bunch of different stuff there, some of it over a certain dollar amount, you might say, hey, I need to capitalize that or something like that Home Depot, Office Depot, and so on. So let’s imagine this item is one of his something like that. Now we’ve already assigned this out. So we’re gonna have to take a look at the rule.

But if you were to add it as you go, then you can add the information. In this case, we took it to equipment, and then we applied a rule for it in a prior presentation. Now I’m thinking now what if it was under a certain dollar amount, then maybe I want to apply it to supplies? And if it’s over a certain dollar amount, then possibly we want to be applying it to equipment, how can we set up rules that will do that for us automatically. Let’s take a look at the rule that has already been set up that’s applying this out to equipment automatically, by going up top and

then we have the money out, it’s to all accounts. And then notice here we have the option of any or all, and we chose that it’s got to have all of these conditions met in order to apply this rule. The first condition is just simply that it has this this name in it, which which is the normal condition we would make with a rule. This would typically be the broad rule. If it was a utility company like Edison, I would just call it Hey, if it has Edison in it, and then delete all the numbers and stuff if it has Edison, put it to the phone bill or utilities or something like that.

we have that same condition, but also we’re saying if the amount is greater than 1500, that’s when we want you to not just apply it out to some kind of expense account but rather apply it out to the Equipment account. Now it’s more likely that you think about this kind of going the other way, like, you might, you might be saying, hey, look, if it’s a small amount, those are more likely to be happening more often, if you’re buying something from like Amazon, or if you’re buying from Costco, or if you’re buying from Home Depot, and then occasionally,

And notice, normally you’ve got like this one condition, let’s delete the second one. And then you would add another condition down here. And then we’re going to make this second condition that it’s going to be an amount rule. So the amount rule, I’m going to say that if it’s greater than the $500, I’m sorry, I want to make it less than I want to make it less than the $500, then you’re going to apply to the account and not equipment, this time, I want to apply it to the expense account of just supplies. So that would probably be the normal thing that we would happen. More transactions, then go into supplies, then us purchasing equipment.

And then if it’s over $500, then we want to consider whether or not we need to capitalize it. And of course, we could make a separate rule for the items that are over the 500, which we’ll take a look at shortly. So that’s going to be the concept here. If I go down, notice that we haven’t been turning on the auto confirm. But if you’re using the auto confirm, then you might say, hey, look, if it’s under this certain dollar amount, I’ll auto confirm it. And if it’s over the certain dollar amount that I don’t want to auto confirm it, I want to check it before I add it to the to the information. So then if I save this rule, I’m going to say

All right, now if I go back on over to our banking information, it’s not going to apply the rule to those items, because these two items are above the dollar threshold that we assigned here. So these two items are above the dollar threshold, therefore it didn’t assign the rule, we don’t have the rule assigned. Now if it’s over that the $500, we’re going to say that we want to we want to check it and possibly put it to then an equipment account. So if I go back up top and say, Okay, now let’s create another rule and see if we can kind of automate the condition of if it was over a certain dollar amount. So I could I could go into the rules here.

And then we’re also going to have the added rule. And it’s going to be an amount rule, the amount rule is going to be now greater than and notice we have $500 here. Now you might think well, the last one was under 500. This one’s greater than 500. What about if it was 500? Exactly. So to kind of get past that one, you could make another rule what would happen if it was 500? Exactly, but you might want to make the second one like 499. That will kind of take care of that it will also apply I believe the first rule First, if the same rule will apply to one transaction, I think it’ll apply the first rule the made first and then the second one.

But this one should it should cover now if it’s worth $500. Exactly, transaction. And so this one, we want to then go into the category, we want to go into the category of the equipment, this time equipment, and then I should be putting the payee. I don’t know if I did that every time, which we’re going to say is here. So that’s the one we want there. And then again, if it’s over some some dollar amount, you might want to if you’re using the auto confirm not to auto confirm it. And then and then only auto confirm the lower dollar amounts possibly Note that you can also have multiple layers of conditions,

you could say that you want this over the 499 and then have another amount layer that’s going to be less than, less than, like 1000. And then you can you can have another rule that it’s if it’s over 1000 for example. So you can then layer your your rules based on how much money you have in that way as well. Rather than just having two layers, but I don’t need that, I’m just gonna close that out. We’re gonna save it.

Let’s save that. And now if I go back on over to our banking information, then of course, it will apply out our rule taking it to the equipment account, it applied the proper rule going to equipment and not supplies because it’s over $500. And it didn’t automatically add it. So we can confirm these two if we want. I can say confirm. Roger that. And then if I go, let’s just do one of them. I’ll go back to the to the balance sheet running the report holding control, scrolling back up to that one to 5%. Then of course we have this amount added to the equipment account here based on that rule.