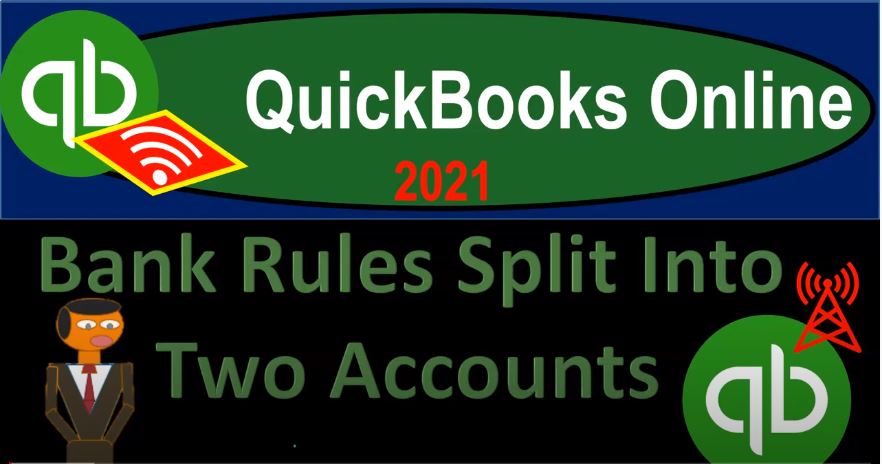 We’re now going through this and adding the information from Bank feed Limbo to the Promised Land of the financial statements, this time using the bank rules to do so let’s open up our financial statements balance sheet and income statement by going to the tab up top right clicking on it, duplicating it, we’ll do that again right click on the tab up top and duplicate again opening up then our balance sheet and income statement.

Otherwise known as the profit and loss, we’ll start off with the P and L the profit and loss the income statement, and then we’re going to do a date range change up top from a one a one to zero to 1231 to zero, run it, close the hamburger Hold CTRL down scroll up just a bit, we’re at that one to 5% then we’re going to go to the next tab to the left. Same process except this time, we’re going to go to the reports then the balance sheet report opened up the good old balance sheet, balancing sheets.

And then I’m going to go up top and range change a 101 to zero to 1231 to zero, run it and then close the hamburger up top there as well. I’m going to open up one more report up here, which is going to be the profit and loss by class which we might put into our discussion as well right clicking on this tab again, duplicate one more time, this time opening up the PnL by class by going to the reports on the left hand side scrolling on down through those reports to the profit and loss by class. Now you may have to have class tracking on to to do this. We talked about that in a prior presentation. It but we’ll just mention the class tracking here.

As we do our split, I’m going to change the date range up top 10101 to zero to 1231 to zero, we’re gonna run that report, running that report. So now we’ve got our classes kind of broken out up top, let’s just go to the standard income statement. First, let’s think about our standard income statement. And let’s say that we have some expenses down here that we want to be breaking out for some reason or another between two accounts. Let’s say it’s something mundane, something like the utilities bill. So we want to break it out possibly we’re breaking it out by location.

And maybe we’re doing that by just an allocation method, what maybe we’re just using a percentage to say whatever the transaction is, I want you to make a 6040 breakout between utilities for Location One, utilities for location two, for example. That means that when it goes to the bank feeds, I’d like to take that one transaction that’s decreased in the checking account and apply it to do two different expense accounts based on some kind of rule, we also might want to set that up in terms of two different locations with use of class or location tracking.

And then that would be over here, where we’re saying I want to break it out by column, you know, that same kind of percent 6040, breaking it out by column is there a way we can do that easily with the bank feeds, let’s check it out. Let’s go to the first tab over here, and I’m going to close up the hamburger. And we’re going to do this down here for the transactions related to the gas company. So we’re going to try to break these out with the use of the bank rules. So if we go into the transaction here, we’re gonna say it’s currently being applied out to the owners capital, and there’s no rule that’s going to be applied to it thus far.

So what we can do is we can use this to basically build our rules. So what I’m going to do is create the rule down below. Let’s create a rule from here and see if we can build this thing out, I’m going to scroll down, I’m going to pick up the So Cal gas that’ll be the name. So I’ll say this is the So Cal gas rule, this is going to be a money out rule check in check in rule. And then if it has in the description, this is standard kind of stuff, like the contents, I don’t want anything but just so Cal so I make sure to pick up the vendor every time.

So I’ve deleted everything and make it a broad rule up top. And then the transaction type, we’re going to have an expense type. Now here’s where the split comes in, we have the category down below, what I’d like to do is break it up between two categories, utilities, location, one utilities location to so I can use the split field to do that. So now we’ve got our splitting options. And we could split by these are the expenses items, we can split by the percentage or add a direct amount. I’m going to say I want to split by a percentage split out.

And so and then we do have a class that we can we can apply out down here as well. So I’m going to then go ahead and see if I can apply the class, this will also break it out on a vertical kind of fashion. So I’m going to say this is going to be L one, I’m just going to add a new class for this, this one. And then the second one we’re going to break out is 40%, of course 40%. And then I’ll make a new category here for my account, I’m going to add a new category. And this is going to be an expense type of thing. utilities, again, utilities, but this is utilities, located Shawn two.

And it’s going to be a sub class category sub account of utilities, the parent account, parent account sub account, then let’s save that, let’s close it. And then we’ll also give it another class as well. So this is location two, which is really neat that we can apply the class out as we split it here. could could be really a neat thing that we have, you might also be able to do that with the location tracking, which is a similar kind of thing we got class tracking on here. So and I put location See, I was trying to put location two, so location two.

Okay. And that’s what we want. That’s the one now we could, you know, so that’s what we want here. So then we got the payee, I should be adding the payee. I don’t know if I always have I’m going to call it So Cal gas. So Cal gas payee. And there we have it, and we could auto confirm it, if we so choose, I’m going to leave that off, so we can kind of double check and save it. And let’s see if it applied out as we would expect it to. So it does look like it’s applying the rule here. Let’s go ahead and add it confirm. Or we can check like click on both off here, and then confirm him at the same time, which is much cooler. So confirm roger that it has been confirmed.

Now let’s see what happens. We’re going to go then to the balance sheet, and then run the report, hold Ctrl. And obviously, they’re going to be coming out of a checking account. So that’s going to be somewhat standard. Let’s go to the income statement. Now. That’s where the interesting stuff is happening. And then we’ll run this report again. Refreshing it. And then if we go down to the utilities, now we got this breakout, we broke it out between these two accounts with the bank feeds, which should apply the rule automatically every time breaking it out to the two locations using that percentage breakout.

So there we have it, if I go into this transaction, it’s then going to not go to the go to the bank feeds. But the expense form, which is breaking it out based on the rule that we set up between these two categories down below the two accounts down below closing that back out, scrolling, then back up top. And there we have it so we can obviously collapse this. So this is really a nice feature, because you can then present it to somebody and say, Hey, here it is, in terms of simply the utilities. And if I want the detail, you got the breakdown.

However, you might also want to break it out not by an account, or by both if you so choose, but rather by columns by location column, or by class tracking. So if I go to the next tab on over, that’s where we do this, it’s kind of ugly because I got I made it some random classes. But if we refresh it, now we’ve got these two classes l one and l two, which are being broken out down here as well.