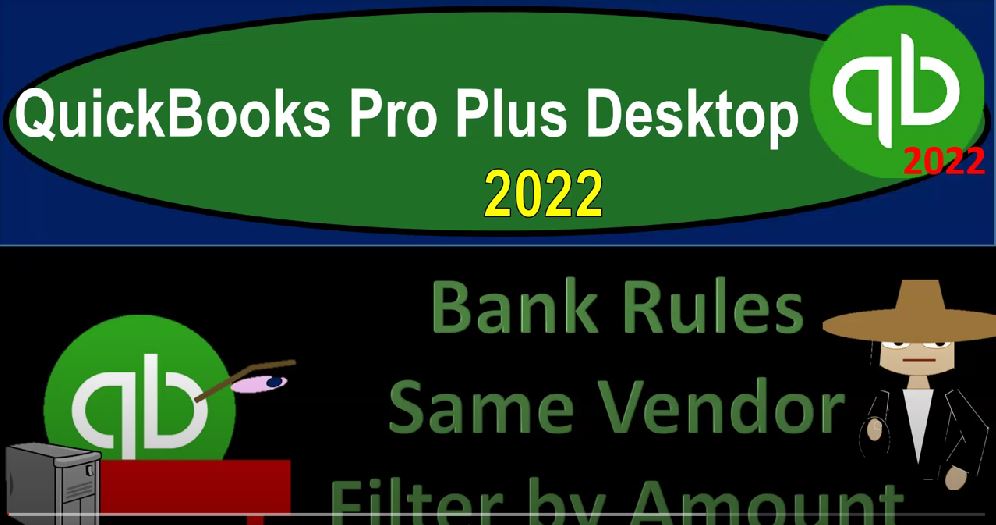 QuickBooks Pro Plus desktop 2022 Bank rules same vendor filter by amount and get ready because we bookkeeping pros are moving up the hill top with QuickBooks Pro Plus desktop 2022. We are in our bank feed practice file go to the setup process with the view drop down the open windows list on the left hand side that company dropped down home page in the middle maximising to the gray area.

Reports drop down company and financial going down to the balance sheet standard, we’re going to be customizing that report with a range change from a 101 to one to 1231 to one fonts and numbers change in the font size up to 14.

And we’re saying if we purchase something under a certain amount of dollar amount, we’re going to just put it to supplies as supplies expense. And if it goes over a certain dollar amount, then we would like to possibly capitalize it put it on the books as an asset. So we have the same vendor that we’re paying in,

but we might be paying for different things. And we might be trying to differentiate by the dollar amount of the thing that we are paying for. So we can imagine this one down here is going to be our vendor that we are paying, we’ve got these two payments, imagine it that if it goes over, let’s just pick a random dollar amount of $1,000, then we potentially want to capitalize it and possibly assign it to a different account.

If it’s under the sum amount, then we’re going to put it into the same into supplies, for example. So to do that, we’re going to say okay, let’s go ahead and hit the drop down and say we want to add details to this thing, add details and set a rule, I’m going to try to put this one and see if I could change it to 500 here as we set the rule up, and then go to my to my rules and create a rule.

the description will be this it doesn’t need to match, I’m just gonna say contains. And I’ll say this part is the same, I don’t need this other stuff on the end, just if it has that, which is basically our vendor, then I’m going to add another line this time and say it has to meet both of these rules. The second rule is that the amount needs to be greater than, greater than $1,000 Greater than the greater than the $1,000.

And so And note that you could have some um, the next rule I’m going to make is when it’s less than $1,000 we assigned somewhere else and you might say, well, what if it’s exactly $1,000 You kind of get that you could make a rule that if it was exactly $1,000 Then you’re going to apply it to one or the other. However, it’s you know, it’s probably not that likely that you’ll hit that exactly 1000. But you could you know, cover that just in case that happens.

just like we talked about with the locations, but I’m just going to keep the same one vendor here and categorize account and then we’re going to set Okay, the account is going To be if it’s over a certain dollar amount, wanted to go to equipment, let’s say, equipment. And though that account is a fixed asset type of account, we will note here as opposed to an expense account.

So it’ll go on the balance sheet, because we’re going to assume we capitalize it if it goes over this amount. So I’m going to save that. And I’ll see if I can save this. So we’ll save that the total amount does not match the downloaded transaction amount. So they won’t let me change the total amount here.

So I gotta, I gotta keep the transaction amount. So we’ll say, okay, 194 4.99 rule, I’m just gonna set the rule up based on this information. Now I’ll close it out, and assign it of course, move those two items to the recognized items over here. So I want to have one over and one under, so we can kind of test it out.

But obviously, both of these are over. So they assigned them both to the equipment. So let’s just imagine let’s hit let’s make another rule, that’s going to be a similar type of rule here. So I’m going to say let’s set up the rule. And let’s say we’re going to add a new rule, a new rule, and see if I can go over here to add it rule. And I want to say that this is going to be similarly name, this is S, A R E S, R Egi.

The rule with this name already exists. So this should be under, under. Because the last one I’ve said over, I should have said the call the other one over, let’s put a dot next to it and say save, I’m going to rename the other rule.

So let’s see what our rules we’ve got two that are under, I’m going to rename this one and edit this rule. Now I’m going to edit it. And I’m going to say this should be over, say over, over $1,000. So it contains that and it’s greater than 1000. So I’m going to save that. So now I’ve got our two of rules, or two rules that should apply to the same vendor. If it’s under a certain dollar amount, it should go to the supplies.

And then on my on my other one, if it’s over five, edit this one. If it’s over $3,000, then we want you to go to the equipment just to test it out. If I up the rule just to give a test here, then we could see now of course they’re going to the supplies account, because they’re over there under these two amounts are under the $3,000.

So those are the two ways you can kind of apply that out, you can see how those rules will apply. And then of course, you could make one more rule, like what if it’s exactly $3,000 In that case, just to cover that instance,

if you need to, but typically, this will be enough to cover it. So I’m going to say let’s add those, let’s check those two off and add them. So I’ll say confirm, Roger that. They’re more than 90 days old, that’s okay.

And that’s going to impact the checking account. So let’s open up the carrot on the left hand side carrot, go to the balance sheet, we’re gonna have an impact on the checking account and the other side is going to go to the profit and loss because I think we expense them just in supplies, double clicking on the supplies. And there we have our items that went into the supplies based on the rule information.