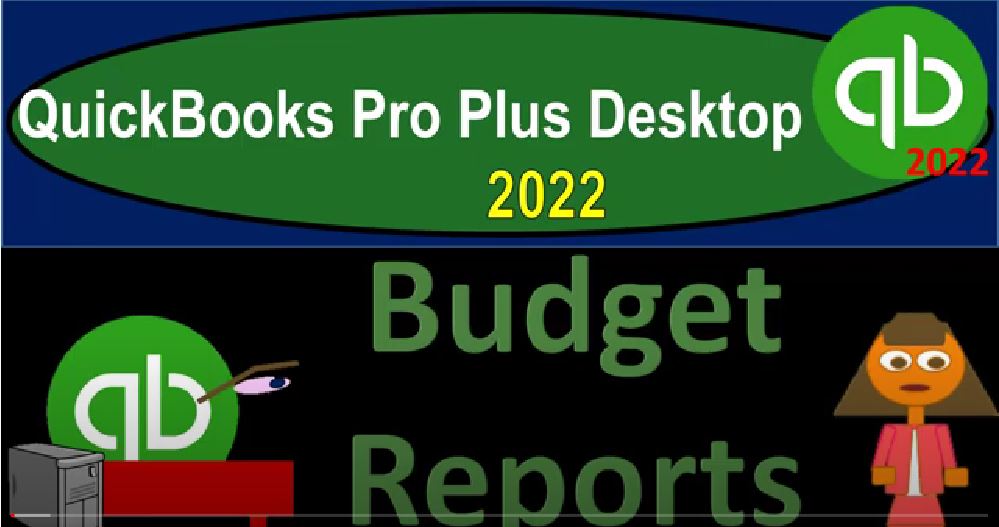 QuickBooks Pro Plus desktop 2020 to a budget reports Get ready because we bookkeeping pros are moving up the hill top with QuickBooks Pro Plus desktop 2022. Here we are in our free QuickBooks sample file sample Rockcastle construction, going through the setup process with a view drop down the open windows list on the left hand side company drop down home page in the middle, maximize the NAT home page, go into the reports drop down company and financial take a look at that balance sheet standard report customizing that report looking at the fonts and the numbers change in that font to 14. Okay, yes, please.

Okay, next reports drop down company and financial profit and loss customizing that report with the fonts and numbers change in that font to 14. Okay, yes, please. Okay, now we’re going to be looking at the budget type of reports, noting that the budget reports are a little bit different.

You’ll recall, let’s jump back on over to the balance sheet report that typically, all other reports other than the major financial statement reports being the balance sheet, the income statement, or profit and loss that we open every time will supplement some line item or multiple line items on the major financial statement reports as does the supplemental aging reports for the accounts receivable, the accounts payable, and so on.

However, a budget is a bit of an exception, because the budget is projecting out into the future. So there are capacities within the QuickBooks software to create a budget. But note that the budgets going to be different in that normally, when you’re thinking about accounting, you’re thinking about taking the transactions that have happened compiling those transactions that have happened in the past, to create the end result that being the balance sheet and the income statement and the supporting reports to it, then you think about using those reports to help make predictions into the future,

which could then include a budget type of system. So once you have your data from QuickBooks, you can think about budgeting. Normally, the process for putting the budget together would be that I would use this data to create the budget in some other software like Excel, using the data to create the budget, which we’ll talk a little bit about in another part of the course after the practice problem. And then once you have the budget, you’d like to put it into QuickBooks generally.

Because that allows you then to run reports as time passes. So in other words, you figure out the budget, then you implement the budget into QuickBooks, which means you’re just going to do the data input to just input it straight into the system. Then as time passes, you can run reports comparing the balance sheet or the report for the actual versus the budget, which usually you’re you’re looking at the income statement, the profit and loss, which is the performance statement, how do we do over time, so we’re going to try to predict how well we’re going to do over time, we’re going to set what we are goals that we want to be achieving over time.

And then as time passes, QuickBooks will give us a nice report, which will allow us to compare what actually happened to what is budgeted to happen. So in other words, you’re not required to enter the budget into the QuickBooks system. But QuickBooks does have the capacity that Once entered, you can run nice reports with the budgets. So let’s go to the drop down and find those budget reports, we go to the drop down up top, the budgets are down here, you could do it this way, by going to the budget overview,

So we got the budget overview and the budget versus the actual. So we’re going to hit the run on the overview first, if we have in place at this point, the profit and loss which is typically what you would be thinking of profit loss that’s going to be running by month. So I’m going to say okay, finishing that report off, and we’ve got the profit and loss by month report for 2023.

Breaking out January, February, and so on what we expect to happen through those timeframes totally up all the way at the right to the total, we could change the date ranges up top. So for example, we might want to see it just for that quarter. Let’s say this fiscal quarter. So now we got October, November and December and then totally up over here, looking much like a normal income statement. But this information isn’t built from past data. We used past data in order to construct this data and then input it directly into the budget in information.

The other report that’s quite useful then if we go to the report center, once we have the budget in place is the budget versus actual report running it, we’re going to say we have that same profit and loss, I’m going to say next by month, we’ll finish that up. And so there we have it. So now we’ve got the information that can be quite long, I’m going to close it up on the left hand side so we can see it. So we’ve got January, and this is the actual what actually happened versus the budget. And so then we have the the over budget information here with a difference between the actual versus the budget, and the percent of the budget.

So if we run this out on a month by month basis, it gets quite long and tedious given the fact that it’s that we’ve got the whole year’s worth of data, we can break it down a little bit, let’s break it down by looking at the quarter fiscal quarter information. So now we’ve got October, November and December and then the total on the right hand side, breaking it down just with the calculator, let’s pull out the trusty calculator. So we can do some calculations, we need the calculator.

So if we were to take the actual number for the total down here, which is the 6165 1.25 minus the budgeted amount, which totaled up to the 2730, we got that difference, there’s with a difference come from the percentage, then I’m going to take the actual number, which is this 6165 1.25 divided by the 20 730. And that if I move the decimal two places overs, where this two to 5.8 is coming from. So this report then can give us an idea of what we expected to happen, what we budgeted to happen.

And then here’s the data input screen, it looks quite overwhelming when you when you basically just look at it, we only have got the profit and loss, you can create a new budget on the right hand side at this point in time. But basically, I would think the normal structure would be and I believe we’ll have a section on the budget at a future point in the course, is would be that I would take the data from the past, export it to Excel, think about that as our starting point.

And then think about the changes that would be in place going forward, including the economy and what improvements we think are going to happen to the business, then adjust what we believe our performance measures will be in the future. Then come back in here, enter the budget informations directly into this data input, which is in essence just an income statement, which is a tedious job, but we’ll go over it’s not too bad.

Once you have it in there, then then you can then do your comparisons between this data that you’ve manually put in projecting out into the future and as time passes to what actually happened during the time that has passed and you get your budget versus actual reports which can be quite useful.