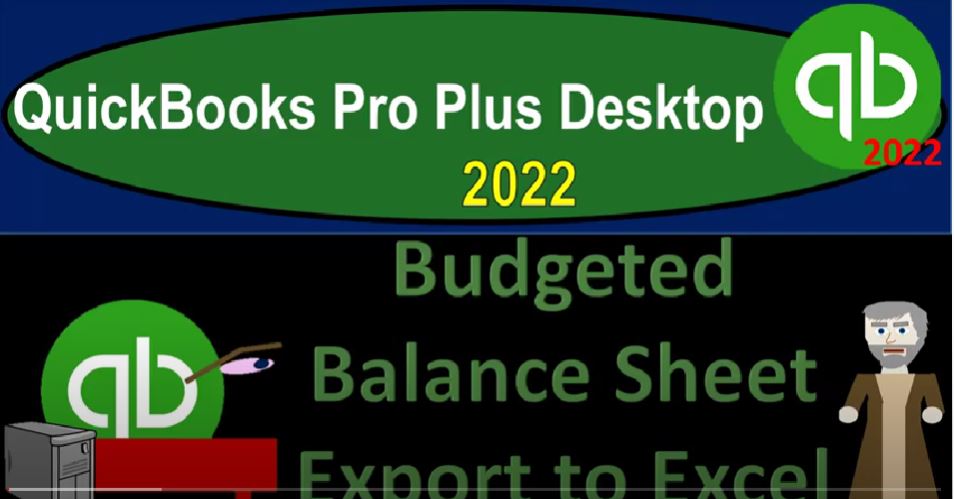 QuickBooks Pro Plus desktop 2022 budgeted balance sheet Export to Excel, get ready because we bookkeeping pros are moving up the hill top with QuickBooks Pro Plus desktop 2022. Here we are in our get Craig guitars practice file going through the setup process with a view drop down the open windows list on the left hand side company dropped down home page in the middle, maximizing it to the gray area reports drop down taking a look at the company and financial scrolling down to that balance sheet standard. We’re then going to customize the balance sheet standard.

We’re gonna do a range change from Oh 1012 to 202 28 to two fonts and numbers changing the font bringing it on up to 14. Okay, yes, please. And okay, we’re going to be looking at a budget related to the balance sheet, which actually can be a little bit more confusing because the balance sheet is as of a point in time it is where we stand as of a point in time. And the performance statement is usually the thing we think about with regards to a budget, that being the income statement.

So when we consider the balance sheet, we’re basically thinking this is where we’re starting at in terms of a balance sheet, often this is how the process would work. And then once the timing activity happens, where will we stand at a future point. Now there’s a there’s a bunch of different ways that you can kind of project the balance sheet in terms of how detailed you want to get in your analysis, you can go through a whole budgeting process, we have courses in both financial accounting and managerial accounting with relation to budgets.

But we’re gonna just kind of do the same concept here we looked at at the income statement, put together a quick budget, and for the balance sheet, and a similar fashion, remembering that the budgeting process is in essence, kind of different or outside of the normal accounting process accounting, typically looking at the past looking at data and entering it and constructing the financial statements with it.

Budgeting takes past data and information projections and then projects out into the future which is done by managerial accounting, and or finance kind of this is an overlap between those areas. What QuickBooks is good at doing is taking the past data, that and then possibly exporting it to Excel, which is what we will do to then create the budget based on analysis of past data and future projections.

And then take that information, put it back into the system, so that we can then do our comparative budget versus actual type of reports, for example. So we’ll export it and then like we did with the income statement will then after we get it in Excel, we will then put it back into the system by going to the company planning and budgeting and we’ll set up another budget for the balance sheet.

That’s only that all the data we have. So we’re gonna do our same kind of thing we did last time exported out and kind of imagine this was for the prior period, November and December. So that we have a starting point that we can project out forward into the current periods, so that we can then take data for January and February that we could put back into our system, and then run the comparative reports budget versus actuals. So let’s see what that’ll look like, let’s go to the reports drop down,

let’s go to the accounting and taxes trial balance, and change the date range from Oh 1012 to 202 2008 to two, there we have it, we could Well, I don’t need to really adjust it. Let’s export this, we’ll just export it as is. So we’re going to go up to the Excel up top. And we’re going to create a new worksheet and I’m going to put it into the existing workbook where we put the income statement, least I’ll attempt to do that.

And existing workbook. Let’s see if we can browse and locate that existing workbook. So we’re going to browse for it. And we put it into not the adjusting entries. We’re now in the budgeting process, budget team, right their budget, double clicking on that and export. So I’m going to maximize this. And so we’ll do some Excel work now. And I know we’re doing kind of a lot in Excel for a QuickBooks course.

This will be our balance sheet. We’ll do some formatting with it. So first off, note that we can make this whole thing a little bit larger, it’s probably hard to see let’s make it bigger down. Here, bring it up to like 140 is what I often work at 140, not 151 40, we’ll keep it there. And then over here, you can see we’re in Calibri 11. And if I go over here, I’m in Arial, eight. So what I like to do is basically make it all uniform.

So it’s all uniform, and then put it into the format that we would like to be working with in general. So I’m going to keep the default formatting over here, Calibri 11, and then format, paint that in the home tab on the in the Home on the Ribbon, and then in the clipboard paintbrush, we’re going to then put that on the entire triangle.

So now it’s all in that format, then I’m going to select the entire triangle and format it the way I would like to format the general sales, right clicking on it, and I’m going to go to the Format Cells down below, and then make it currency, I’m going to put brackets around the negative numbers, make them red as well.

And then we’ll take the dollar sign off. And I don’t need the decimals because it’s really a budget. So not really necessary to have decimals. So we’ll say okay, I’m going to make the whole thing bold, which you don’t need to do, but I think it’s easier to see possibly in presentations. So there we have it, we also got these lines that kind of show up these dotted lines, if those kind of a bug you, you can close the whole thing, save it, and then open it back up, like so.

And those lines will typically go away, there’s probably a better way to do that. That’s the way I you asked the way I normally do it. And if you want the dotted lines that come into place, then you can go from this, this view over here to this view. So you can see the dotted lines, because that’s where they’re going to print, that’s the page breaks. Okay, so let’s clean this thing up now.

So from 25 on down, I’m just gonna delete all that stuff. If I mess it up, not a big deal, because I could just export it again. So I’m not worried about it. Not worried, no worries, man, no worries, we’re going to delete that. And then what I’d like to do is make all the negative, I’m going to use my debits and credits here as debits positive credits negative. So I don’t have these two columns.

And that will allow me to kind of put something that’s in balanced with a very simple formula. If you don’t know debits and credits, I think it’ll still kind of ring true to you. So so let’s try that all these on the right hand side, I’m going to make into a a negative number. The fancy way to do that is to copy this whole thing, I’m going to paste it over here to test it out to make sure it works.

So now they’re negative. And then I just need to pull these over. So they’re in the same column. So the cut and paste, right click and cut or CTRL X and instead of Ctrl C Ctrl X, it like moves it. That’s the same thing by the way of clicking on it, and then dragging it over there pretty much CTRL X and then move it. So you just take the whole thing and Ctrl X control x, and then ctrl the CTRL X and control V and then control x and Control V. Now we have it in one place.

But that’s okay. So now they’re coming out to this 11324 Which you’ll recognize was the the income statement over here. You’ll recall, net income. So what we’re going to do then is I’m just going to make this equity number the plug negative sum of this whole thing, negative sum of this whole thing, plug 79 220 underlining this, that 79220 So if I check that to my balance sheet in QuickBooks, like does that work?

Does that actually work? If I look at all my total assets, can I check that number out? It should be 226784226784. I’ll just select all these and say that down to there are my assets, right down to there. It’s 2266784. Okay, well, the assets work, of course they work. But what about the liabilities? What about them? Do they work? Let’s check out the liabilities. And they come out to be they should come out to be the 8364.

Ad 364, from here to here to their ad 364. But they’re negative. That’s okay. Does that Bob? That’s fine. Okay, that works. But what about the equity, the equity is going to come out to the 143 720. And that’s 143 720 between these 143 720. Now note, you also could be saying, well, what about you know, like these investment, the owner investment and the draws, I’m not so concerned with the investment and the draws as I am to get like the total equity in one number to basically be correct for my budgeting purposes.

So I’m okay with I’m okay with that. That was total equity, right? When, okay. And then we’re in balance, because the whole thing adds up assets equal liabilities, plus equity or debits equal the credits, however you want to see, I’m going to delete column C here, delete that, delete that. And then then I’m going to make another row before called one, so that we can use these numbers to then project out into the future.

So I’m going to right click, I’m going to select the entire row, put my cursor on one, insert, right click and insert. And so now we’re gonna have our budget budget going out this way. Now, the next question, so we’re gonna have like January, let’s put January out here, and then Feb, for example, Feb, and then I’ll select those two, and Excel should be able to recognize the pattern. March excels like marches.

The next one, we’re like, yeah, you got it, Excel. Good work, good work, we’re going to go to the Font group drop down, we’re going to say this is black and white on our headers, let’s center that, and then back to the left. So then we’re going to try to do that now. Now the question is,

Well, how am I going to, you know, project, what cash is going to be like, you know, in January, we’re going to pretend now that these were for the two months, that for the for the end of like December, and now we’re gonna say January numbers are here.

So we’re gonna say this is kind of as of because it’s the balance sheet, the prior period, December 31 2000, or the prior 2021. And then we’re projecting out for January, February at the end of each month. How are we how exactly are we going to do that? We’ll talk more about that next time.