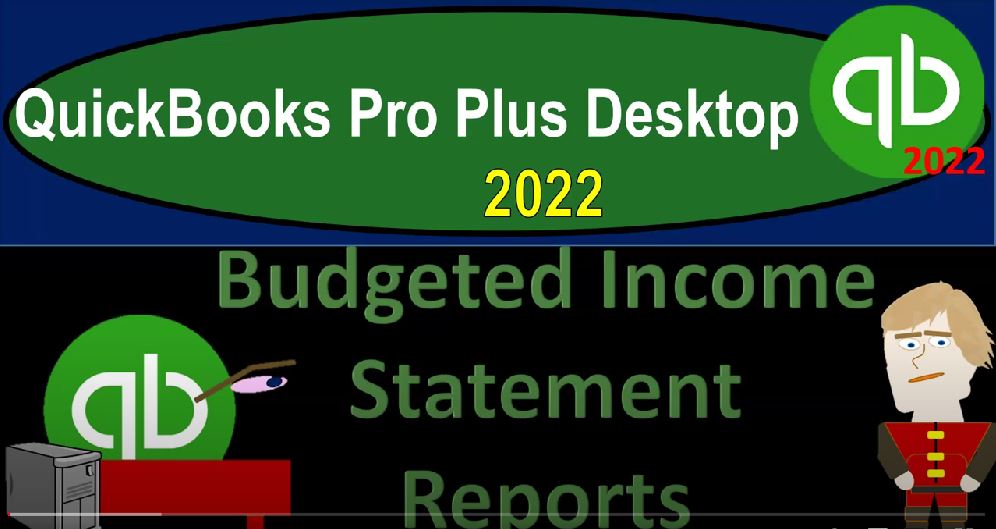 QuickBooks Pro Plus desktop 2022 budgeted income statement reports Get ready because we bookkeeping pros are moving up the hill top with QuickBooks Pro Plus desktop 2022. Here we are in our get great Guitar Practice file going through the setup process with a view drop down the open windows list on the left hand side company drop down home page in the middle maximising to the gray area. Let’s open up the income statement, go into the reports drop down company and financial looking at that profit and loss standard with a range change from

Oh 101 to 2202 20 822, then we’re going to customize that report, go to the fonts and numbers change that font bringing it on up to 14. Okay, yes, please. And okay. And prior presentations, we took this data, the two months of actual data that had been input into the system, we exported it to Excel. So we can use it as the basis point for creating our our budget numbers, we actually got it from a trial balance, but we basically reconstructed the income statement.

And then we took that information and imported it back into our QuickBooks systems. So we put the budget numbers into the system for 12 months, and we gave the 12 month time frame from January to December of 2022. So we kind of imagined as if we were looking at the budget prior to 2022, entered the data for the entire year of 2022. At this point in time, two months have passed for 2022. So we could do a budget versus actual report for those two months.

Now since it’s the first time we really concentrated on these reports. We’re going to go into the Report Center, let’s maximize that Report Center. And then on the left hand side, we’ve got the budget information on the left. And we’ve got the budget overview, let’s open that one up first, just simply running that report, we’re looking at it for the profit and last report.

That’s the only one we’ve created thus far, we’re going to say, Okay, we’ve got the drop down for the month by account by month, that’s the default, we’re going to say okay, and then there is our report, let’s close up the carrot on the left hand side. So the date range that has been pulled up is January 1 2022, through December 31 2022.

That gives us basically the default breaking out this information by month, which is how we entered it into the system, we gave it a month by month of breakout. And we have of course an income statement that is broken out by month projecting out into the future to give us kind of a plan as to what we think is going to happen, you have similar kinds of options you have with other types of reports, including you might change this up top, for example,

to the you know the totals only, this is going to be January through December for the totals now. So now we’re looking at the year data. So if we wanted to just look at the year data, this is one way we can group it, we can hit the drop down and say I would like to look at it by quarter possibly.

Now you also have some options up top, if you go to the Customize, you could go here and say that I want to show the actuals. And then the difference between the two and say, okay, and now you have basically a budget versus actual and but you can actually, you know generate the other report is a budget versus actual report as well. So let’s take a look at that one too. So I’m going to open up the caret on the left hand side. And then let’s go back to the Report Center.

And let’s actually open up the budget versus actual opening up running it. I’m going to say next here and next here, finish that. So we now have the budget versus the actual, I’m going to close up the current on the left hand side since it’s a long report. And if we go through the full date range, January through December, of course, it’s going to be a long report because we’re going to have the actual data, the budget data, and then the difference between the two and the percent.

The percent change. And if I go to the Customize up top, you can see basically what they did here is you got these turned on now. So they took kind of the basic budget report. And then dropped in the actual numbers to it. So you can kind of get there to the same place build it from the prior from the prior report, you can remove the differences and the percent changes if you so choose up here. So you’ve got the actual number for the date here, and then the budget.

So if you were to take these two, you’re going to take the 53857, for example, divided by the 34606. And that’s going to give us if we move the decimal two places over that 155.6%. You can also of course, adjust these items with a similar kind of date range up top. So you might say I want to see it for the year, for example.

Or you might change the date range up top to something like the first quarter from Oh, 1012 to 203 31 to two, for example. And there would be the quarters and then drop down. Let’s now make this months. So now I’m showing the first three months, the first two months, I had actual data for so here’s January actual numbers. And then here’s what was budgeted for January. And then here’s the difference.

We don’t We haven’t gone through March yet. And then we have the budget numbers and then the difference. So if we want to just see the the budget versus actual, we could put this out 202 28 to two. So now we’ve got a nice budget versus actual for those two time periods, which we actually had actual data, which again, you could see in terms of a month by month comparison and the total comparison, if you want to just see the total for the sum of the two months, you could just break this down and say I want to see the totals only.

We’re going to take the data from the accounting department possibly exporting it to excel as a basis point, so that we can construct a budget, which might then best be constructed in Excel, then we’re going to put that information back into the system. By putting the data input company drop down planning and budgeting, setting up the budget here, we could go back in and adjust these budgets.

If we if we need to determine how often we want to adjust them as time passes. And then and then once we have them back into the system. We do what QuickBooks does well, which is to generate the reports and these nice comparative reports in particular, that we can compare what actually happened to what we planned to happen and adjust the budgets again, thus far going forward.