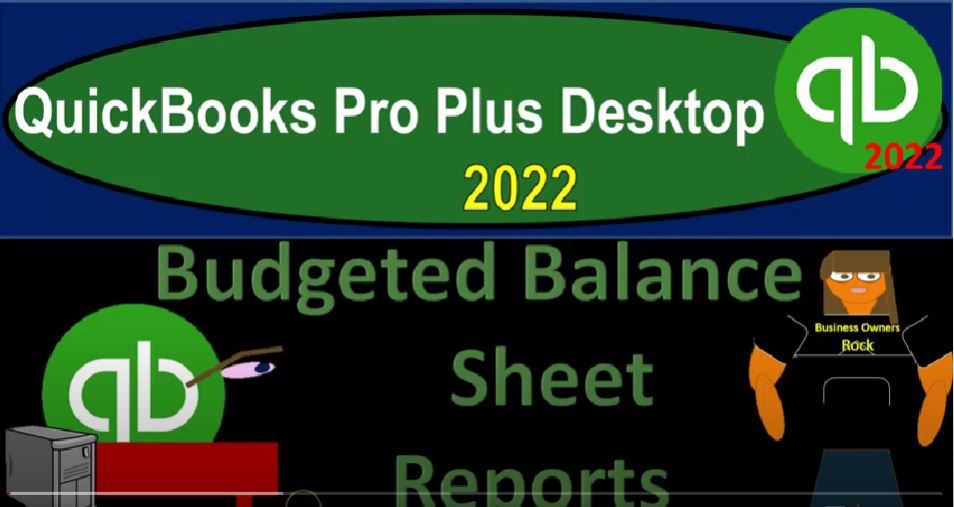 QuickBooks Pro Plus desktop 2022 budgeted balance sheet reports Get ready because we bookkeeping pros are moving up to hilltop with QuickBooks Pro Plus desktop 2022. Here we are in our get great guitars practice file going through the setup process with a view drop down the open windows list on the left hand side company dropped down homepage in the middle maximizing to the gray area,

go into the reports drop down company and financial taking a look at the balance sheet standard changing that report up top customizing it range change from a 1012 to 202 28 to two fonts and the numbers changing the font size bringing it on to 14.

Okay, yes, please. And okay. And prior presentations, we took this information from the balance sheet actually, from the trial balance, exported it to Excel so that we can format our budget projecting out the balance sheet out into the future.

And we’re thinking of it as if we had prior numbers numbers that were for the period ended of December, so that we can then use that to project out into the future, we then input into the system, the information for the balance sheet from a budget perspective, with the company dropped down, we can find that information in the planning and budgeting, we set up the budget.

And now we have two budgets, we got a balance sheet, and a profit and loss, we put in three months worth of detail. we’re imagining we did this before the month, the year of 2022. Now two months have now passed that being January and February, where we can run an actual versus the budget reports for those and then and then March has not yet passed at this point in time.

So it’s here for the full year, that’s going to be basically the default here. So we’ve got January, through December, but we only put data in through March. So we could then change the date range if we so to choose January through, if we say Oh 331 to two,

we’ve got the three months. If we want to see the year to date, we can of course change this one and change the months to say that we want to see the totals only, that’s just going to show the march end data, it’s a little bit different than the profit and loss, you’ll recall, because the balance sheet is as of a point in time, rather than a time frame, how much is going on during the timeframe.

So we’re just have the march data at that point, let’s bring it on down to the month. Again, we’ll bring it up to the months. So there we have the months. And then we can also format up top with the customization. And we could then add the show the actual numbers and then the difference and the percent of the budget.

And then we have our range up top. So now we’ve got the budget versus actual so we have all the way through 12 months very long report, let’s close the carrot up top, we’ve got the actual data, the budgeted data, the difference, and the percent change, just as we saw, in essence with the income statement for the 12 months, once again, we might limit it to the data that we have, which is 401012.

Dude, two to 203 31 to two. And so there we have it. So we got January actual versus the budget, the difference the percent February, the actual versus the budget, the difference the percent and then March, we don’t have any actual numbers yet, or very few at least. But so it’s well we don’t have any change. We didn’t put the budgeted number in. So So I mean the actual numbers in so it’s going to be pulling in from you know, there’s no data that has changed since the February numbers.

So these numbers will in essence be the same. We had a couple transactions that were involved here. So that we got the march budget versus actual and the difference here. If we’re running just the the Two months that have data in in in them, we can say January 1 2022, through Oh 228 to two.

And so there’s the act, the months that have the activities within them. So remember, when you’re thinking about the budget information, usually you’re thinking about the income statement, you’re usually thinking, you know, we’re going to take the data from QuickBooks in the past, export it to Excel, usually starting with the income statement, do the budget, and then put that back into the system.

And then possibly thinking about the balance sheet, possibly adding that into a more detailed budget scenario. And in part, what you’re doing there is taking a look at where you stood before you did the income statement, budget income statement being the poor performance, how you’re going to perform, to then determine where you’re going to basically end up at the end. So after the performance, the balance sheet will be the point in time at the end of that timeframe.

You can see here that we just have the two points and times we don’t have a total over here, as we saw with the income statement because the budget is as of a point in time, I do want to make a quick reminder as well, that when you put the balance sheet in place, that you don’t have those same kind of restraints that you might be used to within QuickBooks to to make sure that everything ties out.

So you remember that when we put this into the to the system in Excel, we kind of had to put the plug in or think about what the equity should be. And so you don’t so you don’t have that same kind of that information that’s going to be tying out when you just plug in the information with regards to the budgets. That’s something of course, to be aware of when you’re trying to populate the budgeting information.